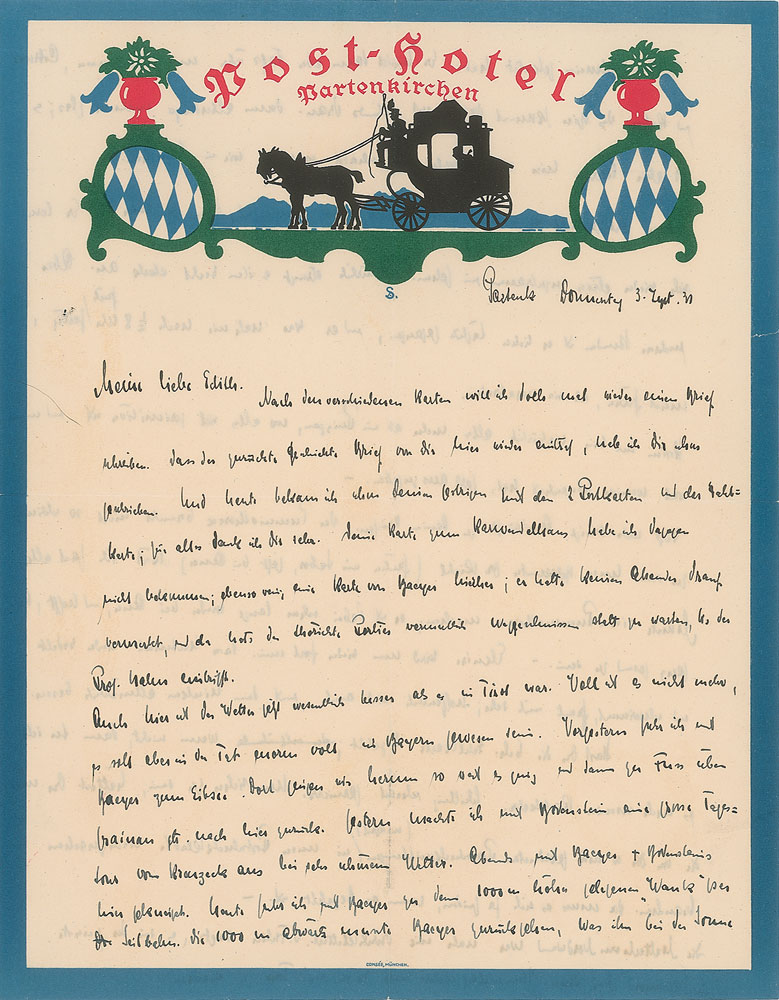 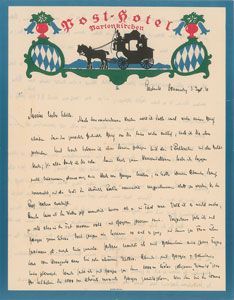 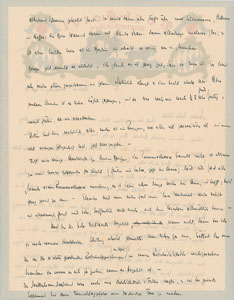 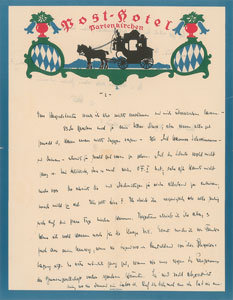 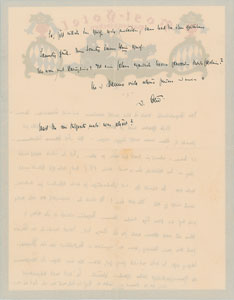 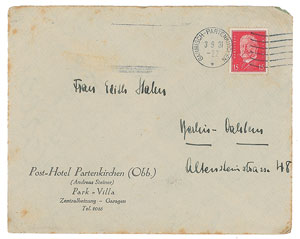 German chemist (1879-1968) who won the 1944 Nobel Prize for the discovery of nuclear fission. ALS in German, signed “Otto,” two pages both sides, 8.5 x 11, colorful hotel letterhead, September 3, 1931. Long, gossipy letter to his wife Edith, written from Partenkirchen, making reference to Lise Meitner, physicist and longtime colleague of Hahn. In part (translated): "I do want to write you a real letter…And today I got the one you sent…I thank you for all of them. But I never got the card you sent to the Karwendel hut, nor the card Baeyer sent here; he had not put his return address on it, so the stupid hotel desk clerk probably threw it out instead of keeping it until Professor Hahn would arrive. Here, too…Two days ago I drove to Lake Eib with Baeyer…. Baeyer, Bodenstein and I spent the evening in one of the local pubs. Today, Baeyer and I took the funicular up to the ‘Wank,’ another 3,000 ft higher. Baeyer was able to walk those 3,000 ft back down, which he paid for with a lot of sweat. But during the day, he only drinks seltzer, lemonade, and coffee. And only in the evening it’s beer, but then several glasses. But it’s easier here than in Berlin and it does as little harm as in Munich…Of course it all costs more than in the Pinzgau, where everything is more primitive and where there are fewer opportunities to spend money. Now a little more regarding your letters. The pneumothorax may not be all that bad. Our acquaintance, Dr. Riehl (used to be in the laboratory, now is with Auer) has one done almost every month; meanwhile, he’s been back with Bauer and hopes to be fully recovered soon.—I am happy that Hartmut is biking and swimming again and hope the limping will improve as well…Well, I won’t say anything about the Punch and Judy show and will wait to be surprised…How is Lise [Meitner]? I wrote her a while back to think about coming here for a few days, but two days ago I wrote her that it wouldn’t be worth it now for such a short time. I may well make a detour from Frankfurt if she is somewhere in Germany before her physics conference. It wouldn’t hurt if we were able to talk about the program of the Bunsengesellschaft before it takes place. She must be quite exhausted coming straight from the lab. Why don’t you call and invite her." In fine condition. Accompanied by the original mailing envelope, addressed in Hahn's hand.

Lise Meitner worked together with Hahn for 30 years, each of them leading a section in Berlin's Kaiser Wilhelm Institute for Chemistry. Hahn and Meitner collaborated closely, studying radioactivity, with her knowledge of physics and his knowledge of chemistry. In 1918, they discovered the element protactinium. This is a highly attractive letter, both lengthy, gossipy and with great association. Hahn refers to colleagues, Otto von Baeyer and Max Bodenstein.