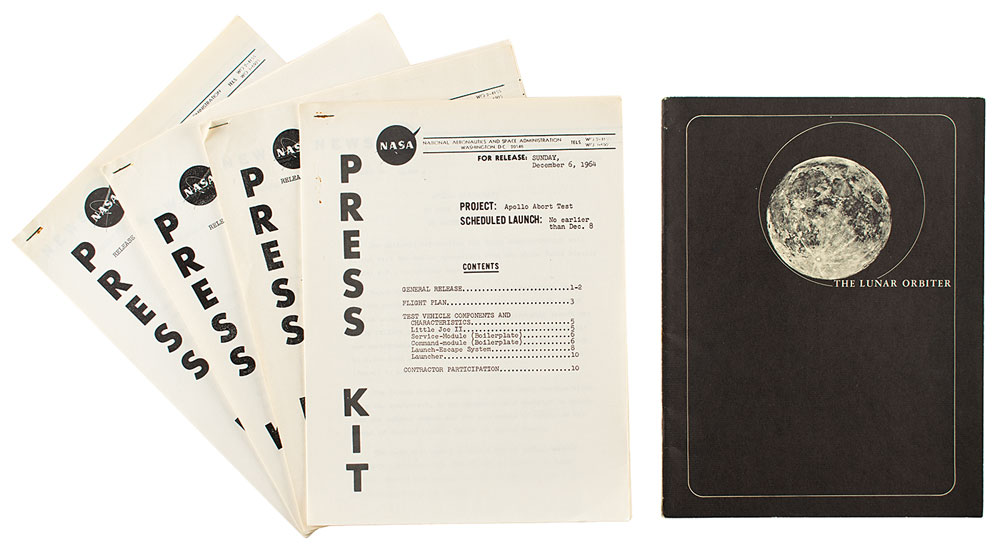 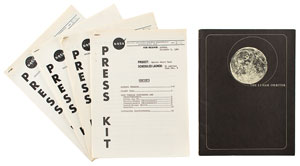 Group lot of five early official NASA publications from the mid 1960s, including four stapled press kit packets and a booklet entitled The Lunar Orbiter. The press kits, in order of release, are as follows: December 6, 1964, Project: Apollo Abort Test, 10 pages, Release No. 64-299, with scheduled launch reading: “No earlier than Dec. 8”; May 9, 1965, Project: Apollo Boilerplate 22, 17 pages, Release No. 65-145, with final pages containing diagrams related to Mission A-003; June 25, 1965, Project: Apollo Pad-Abort, 10 pages, Release No. 65-202, with last page featuring a diagram of a launch escape vehicle; and December 5, 1965, Project: Apollo Launch Escape System Tests, 17 pages, Release No. 65-348, with final pages containing configurations for Mission A-004. The Lunar Orbiter booklet, prepared for NASA by the Space Division of the Boeing Company, revision date of April 1966, 38 pages, with introduction reading, in part: “This document was prepared to provide familiarization with the purpose and objectives of the Lunar Orbiter project for the information and orientation of persons not closely associated with the program.” Inside front cover of booklet stamped: “Received, The Boeing Company, Contracts, May 18…’66.” In overall fine condition, with some creasing and light rusting staples. From the collection of Tim Furniss, Flight International magazine’s spaceflight correspondent from 1984 to 2006, and author of over 35 published books on space history.