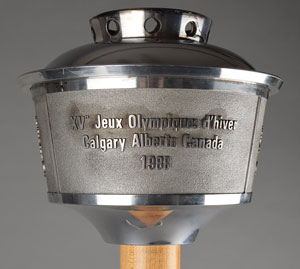 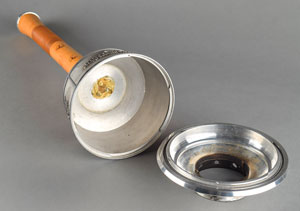 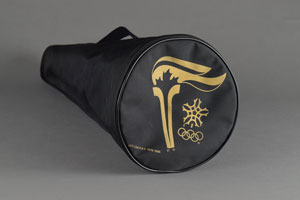 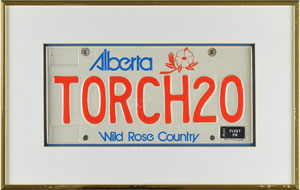 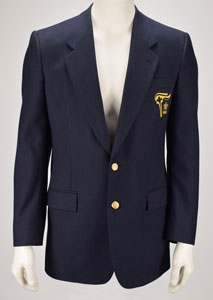 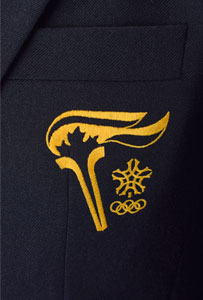 Rare official 1988 Calgary Winter Olympics torch used during the Olympic relay, comprised of aluminum with a maple handle, measuring 23.5″ in length, emblazoned on the handle with pictograms of ten Winter Olympic sports. The top inscribed with raised text in English and French, “XV Olympic Winter Games Calgary Alberta Canada 1988,” with underside of bowl engraved: “COA/A.O.C. 1979-1986”; the ball at the base of the handle is engraved with the Olympic motto, “Citius, Altius, Fortius.”

Included with the torch: a pair of original four-wick burner canisters (one used and one unused); the torch bowl spring; a matching aluminum presentation stand; the original black carrying bag; a framed Alberta vanity license plate, “TORCH20," removed from an official 'torch run' vehicle; and a wool navy blue executive blazer by Rio Sollway of Calgary, size R/S, with Olympic torch and Calgary 1988 Winter Olympics logo embroidered in golden thread to left chest. The torch and the accompanying items were presented to an employee of Petro-Canada, the sponsor of the Olympic torch relay from 1970 until 1991, who served as the western manager of the Calgary torch relay and was tasked with making sure that the torch made a successful journey from the Manitoba/Ontario border and into McMahon Stadium for the opening ceremonies.

Designed by the National Research Council of Canada, the torch was made to resemble the Calgary Tower, an iconic landmark in the Canadian city. The torch relay, called 'Share the Flame,' was an enormous event, with approximately 6,500 torchbearers drawn from an application pool of over six million. After the lighting ceremony in Olympia, the flame was flown to Newfoundland and then traveled 18,000 km through Canada over 88 days. Unlike many relays, the torches were shared and thus only about one hundred and fifty were manufactured, with this torch representing No. 60. Augmented by its steadfast provenance and unique accoutrements, this is a supremely desirable example of what is one of the most sought-after modern Olympic torches.