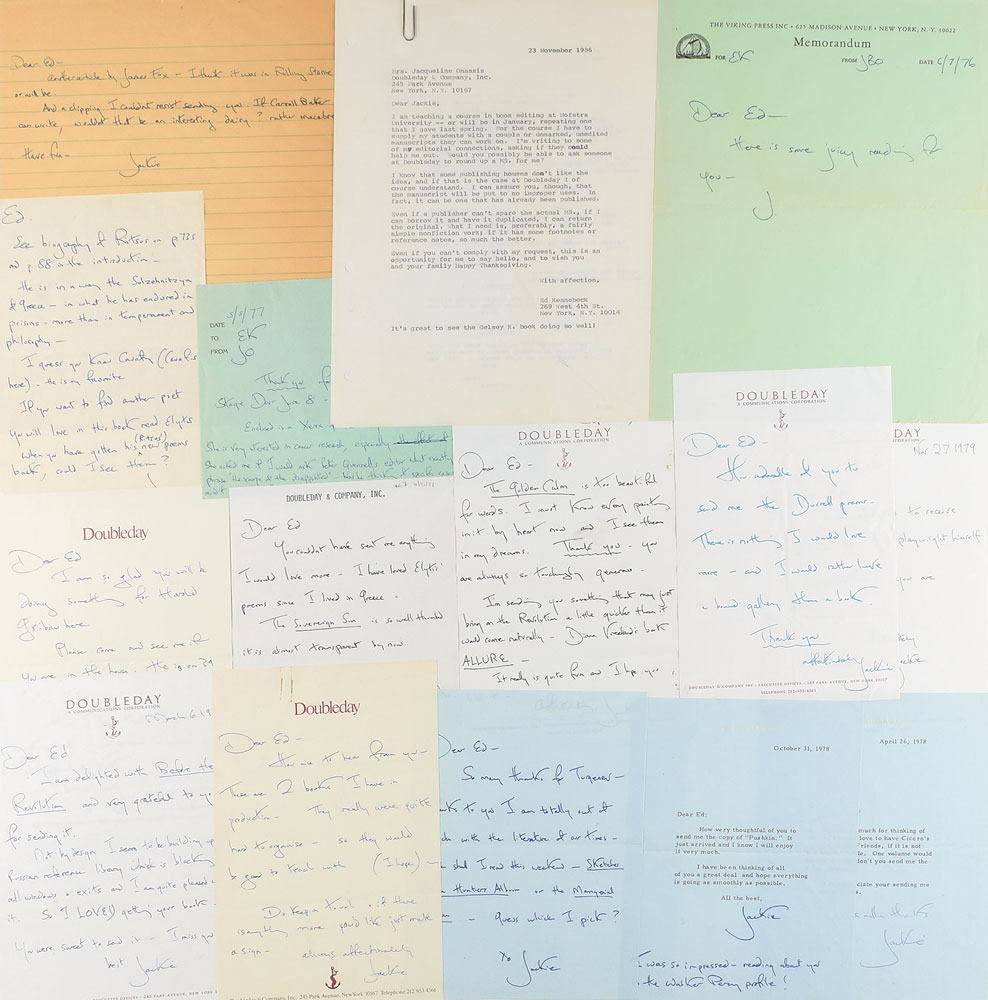 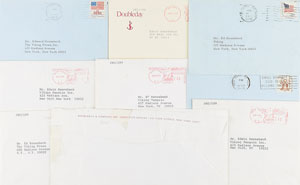 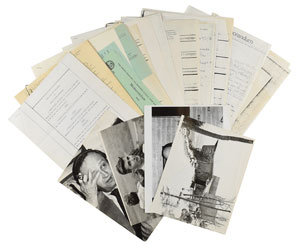 Collection of 12 ALSs and two TLSs from Jacqueline Kennedy during her time working as an editor at Viking Press and Doubleday, the majority signed “Jackie,” each one page, ranging in size from 5 x 8 to 8.5 x 11, dated between June 1976 and November 1986. Each addressed to her friend and fellow Viking Press editor Edwin Kennebeck, the letters are devoted entirely to that of their working relationship, with Kennedy sending updates, thanks, and literary recommendations while revealing her fondness for Russian poetry.

An ALS signed “J.,” no date but circa October 1976, in part: “See biography of [Yiannis] Ritsos on p.735 and p.88 in the introduction—He is in a way the Solzhenitsyn of Greece—in what he has endured in prisons—more than in temperament and philosophy. I guess you know Cavafy (Cavafis here)—He is my favorite.”

An ALS signed “Jo,” penned on a Viking Penguin memorandum sheet, dated May 5, 1977, in part: “Enclosed is a Xerox from Dorothy Schiff—from The Marble Foot. She is very interested in cancer research, especially emotions as cause at cancer. She asked me if I would ask Peter Quennell’s editor what exactly he meant by the underlined phrase ‘the scourge of the disappointed’—was he thinking of specific cases.”

An ALS, written on personal 1040 Fifth Avenue stationery, postmarked February 25, 1978, in full: “So many thanks for Turgenev—thanks to you I am totally out of touch with the literature of our times—which shall I read this weekend—Sketches from a Hunter’s Album or the Managerial Woman—guess which I pick?” Accompanied by the original mailing envelope, addressed in her own hand.

A TLS, 1040 Fifth Avenue stationery, April 26, 1978, in part: “Thanks so much for thinking of me and I would love to have Cicero’s Letters to his Friends, if it is not too much trouble. One volume would be fine so why don’t you send me the first volume.”

A TLS, 1040 Fifth Avenue stationery, October 31, 1978, in part: “How very thoughtful of you to send me the copy of ‘Pushkin.’ It just arrived and I know I will enjoy it very much.” Jackie adds a brief handwritten postscript: “I was so impressed—reading about you in the Walker Percy profile!”

An ALS, Doubleday stationery, March 6, 1979, in full: “I am delighted with Before the Revolution and very grateful to you for sending it. Not by design I seem to be building up a Russian reference library which is blocking all windows & exits and I am quite pleased with it. So I loved getting your book—You were sweet to send it—I miss you.”

An ALS, Doubleday stationery, September 25, 1980, in part: “The Golden Calm is too beautiful for words. I must know every painting in it by heart by now and I see them in my dreams. Thank you—you are always so touchingly generous. I’m sending you something that may just bring on the Revolution a little quicker than it would come naturally— Diana Vreeland’s book ALLURE.”

An ALS, Doubleday stationery, postmarked November 24, 1981, in part: “You couldn’t have sent me anything I would love more—I have loved Elytis’ poems since I lived in Greece—The Sovereign Sun is so well thumbed it is almost transparent by now. As with Cavafy there are some poems one couldn’t live without rereading often.” In overall fine condition. From the estate of Edwin Kennebeck.

Accompanied by several original mailing envelopes, as well as an archive of material relating to the nearly 15-year correspondence between Kennedy and Kennebeck, which includes newspaper clippings, four glossy photos, several copies of memos and letters from both, a copy of Kennebeck's last will and testament, and a copiously edited draft of a biography for Kennebeck entitled 'Persnickety from Birth.'

In September 1975, six months from the death of her second husband, Aristotle Onassis, Jacqueline Kennedy reentered the work force for the first time since 1953. The 46-year-old former first lady had been given a consulting editor position at Viking Press earning $200 a week.

Although much of her first year was spent adjusting to the publishing industry, the books Kennedy acquired for Viking reflected her interests in history, art, and culture. Her first title was Remember the Ladies, a companion volume to an American Bicentennial traveling exhibition on the role of women in 18th century America. She followed it with In the Russian Style, an illustrated volume on clothing and artifacts from Czarist Russia, and then a collaboration with Diana Vreeland.

When Viking opted to publish the Jeffrey Archer novel Shall We Tell the President?, which featured a plot about an assassination attempt on Ted Kennedy, Jackie resigned and took the job of associate editor at Doubleday, a company she would remain with for the remainder of her professional career. Deriving from the archives of Viking senior copy editor Ed Kennebeck, this magnificent archive offers a unique glimpse into Kennedy’s lifelong passion for reading and literature—Jackie Kennedy’s love for poetry was later anthologized by her daughter Caroline in the book The Best-Loved Poems of Jacqueline Kennedy Onassis.