As Minister to France, Jefferson successfully reduces taxes on American cargo with the aid of the Marquis de Lafayette 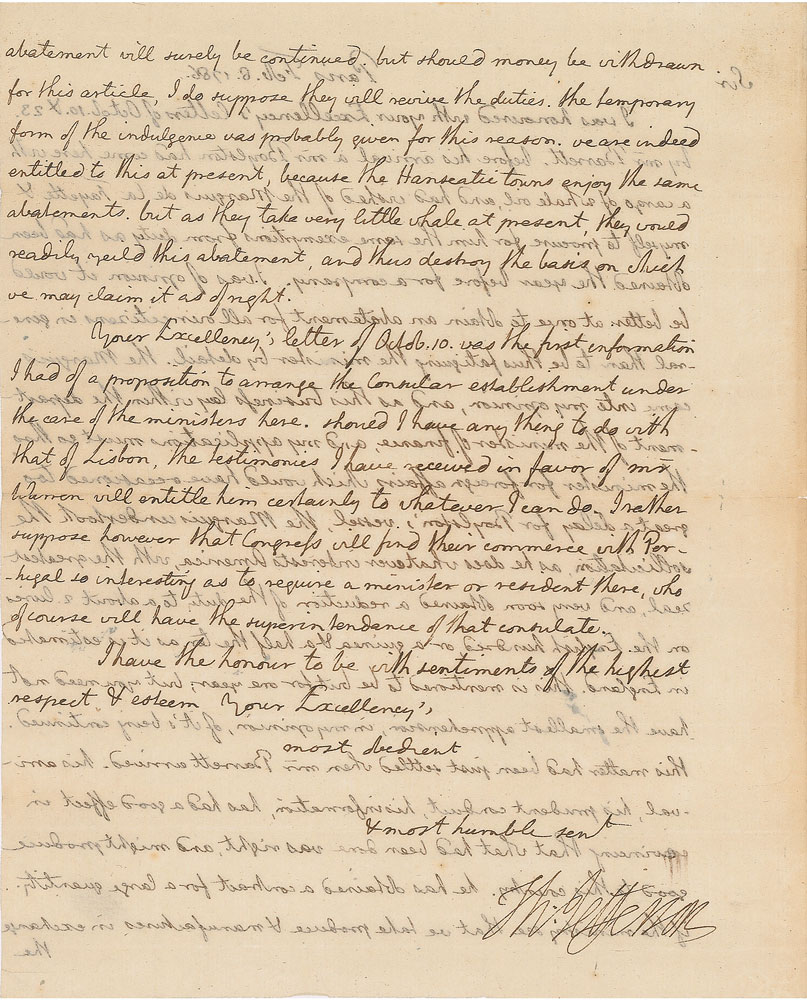 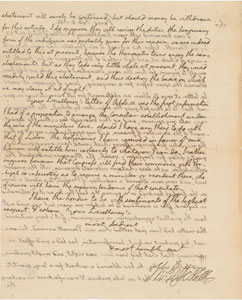 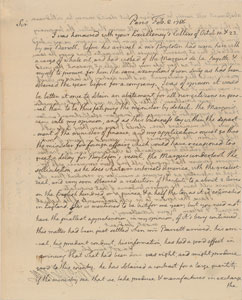 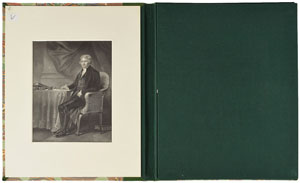 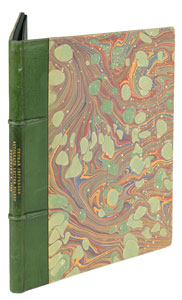 As Minister to France, Jefferson successfully reduces taxes on American cargo with the aid of the Marquis de Lafayette

Handwritten letter signed “Th: Jefferson,” one page both sides, 7.25 x 9, February 8, 1786. Letter to Governor James Bowdoin of Massachusetts, written from Paris while serving as minister to France. In part: "I was honoured with your Excellency's letters of Octob. 10 & 23 by Mr. Barrett. Before his arrival a Mr. Boylston had come here with a cargo of whale oil, and had wished of the Marquis de la Fayette & myself to procure for him the same exemptions from duty as had been obtained the year before for a company. I was of opinion it would be better at once to obtain an abatement for all our citizens in general than to be thus fatiguing the minister by detail. The Marquis came into my opinion, and as this business lay within the department of the minister of finance, and my applications must go thro' the minister for foreign affairs which would have occasioned too great a delay for Boylston’s vessel, the Marquis undertook the solicitation, as he does whatever interests America, with the greatest zeal, and very soon obtained a reduction of the duty to about 2 livres on the English hundred, or a guinea & a half the ton as it is estimated in England. This is mentioned to be but for one year; but you need not have the smallest apprehension, in my opinion, of it’s being continued. This matter had been just settled when Mr. Barrett arrived. His arrival, his prudent conduct, his information, has had a good effect in convincing that what had been done was right, and might produce good to this country. He has obtained a contract for a large quantity if the ministry see that we take produce & manufactures in exchange the abatement will surely be continued. But should money be withdrawn for this article, I do suppose they will revive the duties. The temporary form of the indulgence was probably given for this reason. We are indeed entitled to this at present, because the Hanseatic towns enjoy the same abatements. But as they take very little whale at present, they would readily yield this abatement, and thus destroy the basis on which we may claim it as of right." In fine condition. Accompanied by a beautiful custom-made presentation folder with a quarter leather binding.

In July 1784, Jefferson sailed to Paris to serve as a trade commissioner, but upon his arrival acquired the unenviable position of successor to Benjamin Franklin’s role as the Minister to France. In his 1821 autobiography, Jefferson summarized his functions: ‘My duties at Paris were confined to a few objects; the receipt of our whale-oils, salted fish, and salted meats on favorable terms, the admission of our rice on equal terms with that of Piedmont, Egypt & the Levant, a mitigation of the monopolies of our tobacco by the Farmers-general, and a free admission of our productions into their islands.’ Not inclined to show favoritism to any particular cargo or company, Jefferson immediately determined that the reduction in duty should be unequivocally across the board. During this period he became a regular companion of the Marquis de Lafayette and soon gained his support, and assistance, in dealing with the French officials in question. Jefferson credited much of his Parisian success to Lafayette: ‘I was powerfully aided by all the influence and the energies of the Marquis de Lafayette, who proved himself equally zealous for the friendship and welfare of both nations; and, injustice, I must also say, that I found the government entirely disposed to befriend us on all occasions, and to yield us every indulgence, not absolutely injurious to themselves.’ Pre-certified PSA/DNA.