Madison on the impending ratification of Jay's Treaty and revolutionary Europe: "Nothing remains in the way of a quiet & compleat establishment of a third Republic on the rights of man" 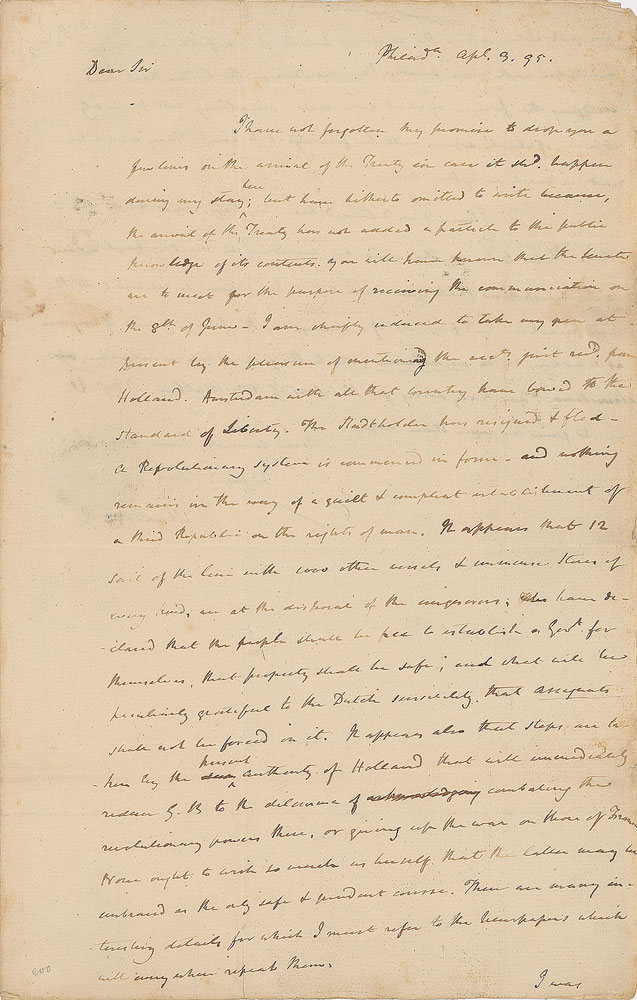 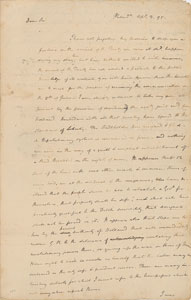 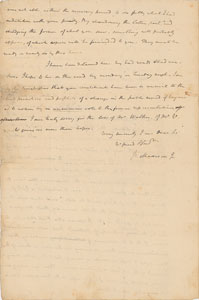 Madison on the impending ratification of Jay's Treaty and revolutionary Europe: "Nothing remains in the way of a quiet & compleat establishment of a third Republic on the rights of man"

ALS signed “J. Madison, Jr.,” one page both sides, 8.25 x 12.75, April 3, 1795. Letter to Congressman William Branch Giles, a fellow delegate in the House of Representative from Virginia. In full: "I have not forgotten my promise to drop you a few lines on the arrival of the Treaty [Jay’s Treaty] in case it sh’d happen during my day here; but have hitherto omitted to write because the arrival of the Treaty has not added a particle to the public knowledge of its contents. You will have known that the Senate are to meet for the purpose of receiving the communication on the 8th of June. I am chiefly induced to take my pen at present by the pleasure of mentioning the sec’ts just rec’d from Holland. Amsterdam with all that country have bowed to the standard of Liberty. The Stadtholder [William V] has resigned & fled. A Revolutionary system is commenced in form—and nothing remains in the way of a quiet & compleat establishment of a third Republic on the rights of man. It appears that 12 sail of the line with 1000 other vessels & immense stores of every kind, are at the disposal of the conquerers [France]; who have declared that the people shall be free to establish a Govt. for themselves, that property shall be safe; and what will be peculiarly grateful to the Dutch sensibility that assignats [paper currency issued during the French Revolution] shall not be forced on it. It appears also that steps are taken by the present authority of Holland that will immediately reduce G. B. [Great Britain] to the dilemma of combatting the revolutionary powers there, or giving up the war on those of France. None ought to wish so much as herself that the latter may be embraced as the only safe & prudent course. There are many interesting details for which I must refer to the newspapers which will everywhere repeat them.

I was not able within the necessary period to do fully what I had undertaken with your privity [a legal contract]. By abandoning the latter part, and abridging the former of what you saw, something will probably appear, of which copies will be forwarded to you. They must be ready or nearly so by this time.

I have been detained here by bad roads & weather. I hope to be on the road by Monday or Tuesday next. I see by the newspapers that your constituents have been so uncivil to the kind preachers and prophets of a change in the public mind of Virginia as to adhere by an unanimous vote to their former representative. I am truly sorry for the loss of Mr. [Francis] Walker. Of Mr. [Abraham B.] V[enable]. reports gives us more than hopes." Addressed on the reverse of the second integral page in another hand. In very good to fine condition, with repaired paper loss to a blank area of the integral address leaf.

In this remarkable letter, Madison touches upon a number of important world events—first, the Jay Treaty, which had been signed in London on November 19, 1794, but was not yet ratified by the Senate. As a congressman in the House of Representatives, Madison had no deciding vote on the treaty, but was one of its chief opponents. He argued that the treaty could not, under Constitutional law, take effect without approval of the House, since it regulated commerce and exercised legislative powers granted to Congress. Madison lost this early debate on the Constitution, and the Jay Treaty was ratified by the Senate on June 24, 1795.

He goes on to discuss the political situation in Europe—William V, Prince of Orange, the last Stadtholder of the Dutch Republic, had recently fled from the Netherlands and was living in exile in England. French troops had overrun the Dutch fleet, and the Batavian Republic was established in January 1795, modeled on the revolutionary French Republic and governed by Dutch Patriots under French influence. An insightful early letter on world affairs.