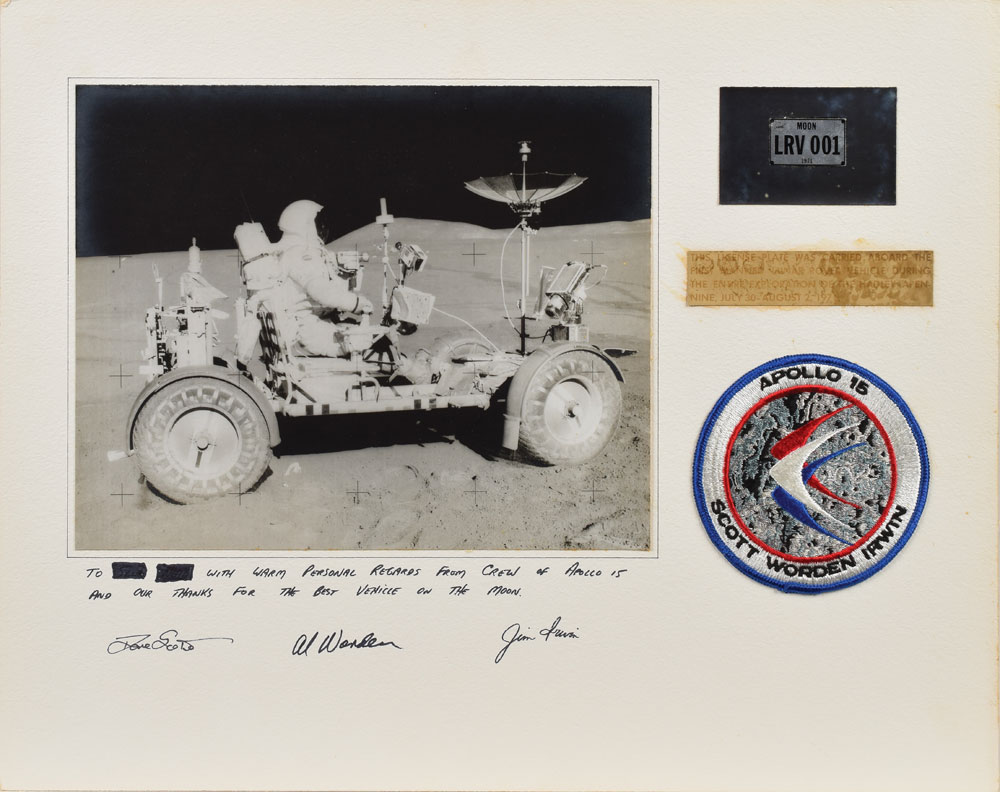 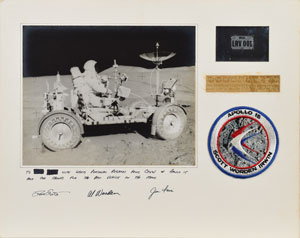 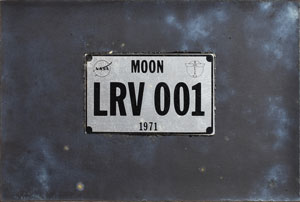 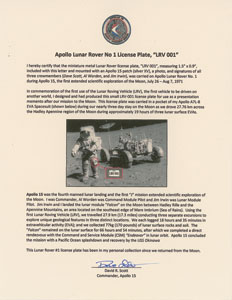 Flown aluminum 'lunar rover license plate' carried to the lunar surface on Apollo 15 from the collection of Commander Dave Scott, 1.25 x .75, marked with the registration number "LRV 001," with "MOON" as the home state, the year 1971, and the NASA and Boeing logos in the corners. The miniature license plate is affixed to a 17 x 13.5 mount bearing an affixed Apollo 15 mission patch (with "XV" embroidered in silver thread), a photo of Scott driving the lunar rover, and a plate certifying the flown status: "This license plate was carried aboard the first manned lunar rover vehicle during the entire exploration of the Hadley-Apennine, July 30-August 2, 1971." Signed and inscribed below the photo in black felt tip, "To…with warm personal regards from crew of Apollo 15 and our thanks for the best vehicle on the moon, Jim Irwin," "Dave Scott," and "Al Worden," with the name of the recipient having been marked over. In fine condition, with irregular toning to the affixed caption. Accompanied by a signed letter of provenance from Scott, in part: "I hereby certify that the miniature metal Lunar Rover license plate...included with this letter and mounted with an Apollo 15 patch (silver XV), a photo, and signatures of all three crewmembers (Dave Scott, Al Worden, and Jim Irwin), was carried on Apollo Lunar Rover No. 1 during Apollo 15, the first extended scientific exploration of the Moon July 26-Aug 7, 1971. In commemoration of the first use of the Lunar Roving Vehicle (LRV), the first vehicle to be driven on another world, I designed and had produced this small LRV-001 license plate for use as a presentation memento after our mission to the Moon. This license plate was carried in a pocket of my Apollo A7L-B EVA Spacesuit...during our nearly three day stay on the Moon as we drove 27.76 km across the Hadley Apennine region of the Moon during approximately 19 hours of three lunar surface EVAs."

This plate, along with others, was prepackaged in a pack smaller than a pack of gum, which was stowed in the left knee pocket of Scott's space suit before the launch, where it remained until after his return to earth. It was in space for 12 days, 7 hours from launch to splashdown. More importantly, it spent nearly 67 hours on the moon, including 18h 30m of EVAs, and was carried on LRV itself for around 17 miles across the lunar surface. A wonderful presentation of a highly desirable surface-flown piece.