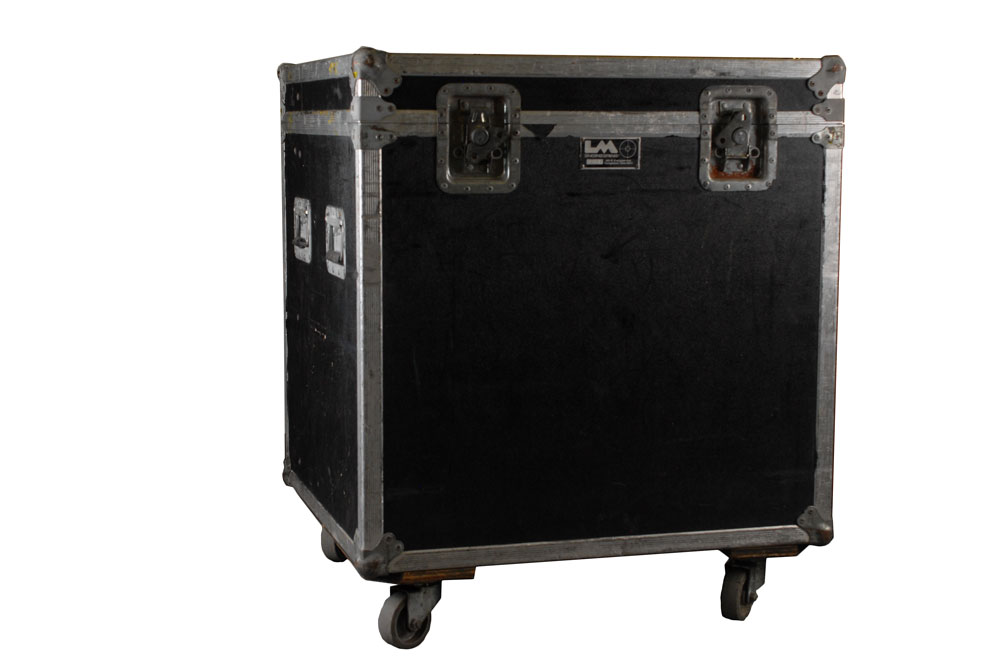 Marky Ramone’s tour-used kick drum road case, measuring 30.25 x 30.25 x 27.75, with a foam-lined 27 x 19.75 main compartment, and a felt-lined 29 x 4.25 rear compartment. The black-textured plywood case features four handles and four casters, with an LM Engineering plate on the front. Included with the case: a stage-used 25″ clear Remo bass drumhead, signed in black felt tip, “Marky Ramone, 98”; an off-white coated 25″ Remo Weather King bass drumhead and an off-white 25″ Pearl bass drumhead, personally-used and customized by Ramone during his time playing with The Remains; a stage-used 22″ Paiste Full Ride cymbal #99084936; a set of five Vic Firth drumsticks, 16.25″ in length, from one of Marky’s endorsement deals; two laminated all access backstage passes, approximately 2.75 x 3.75, from The Ramones’ Acid Eaters and Loco Live concerts, a grouping of five identical black The Remains t-shirts, one size XL, the rest size L; two Marky Ramone & The Intruders t-shirts, one white and the other black with an image of three giant robots, both size L. The Remains t-shirts are rare merchandize from before they changed the last letter to a “z,” in order to avoid copyright infringement and includes is a letter of provenance from Warren Cohen explaining this. In overall fine to very good condition, with expected overall wear to road case and disintegration to interior foam, and expected wear from use to drumheads (a central hole to the signed example). Additionally included is a printout of an email from Steve Riskin of Paiste America, Inc. confirming the included Paiste cymbal as Marky’s and referring to by the exact #99084936. Oversized. Accompanied by copies of letters of provenance from CJ Ramone, Ramones tour manager Monte Melnick, and Ramones guitar tech Matt Loyla, all of which confirm the authenticity of the kick drum road case and Warren Cohen’s close ties to the band as their assistant tour manager (the originals, which mention both this lot and Marky’s drum hardware road case, remain with lot 2403 in the current auction). The letter from Matt Loyla reads, in part: “I can confirm that these road cases were used by The Ramones for both domestic and international tours...the larger case was used to house and transport the kick drum and drum heads and skins...as far as I know, they were both used by the band until their retirement.” Certified by four Ramone’s insiders—including CJ himself—this is an exceptional offering featuring a wide variety of pieces, many stage-used. The Warren Cohen Collection.