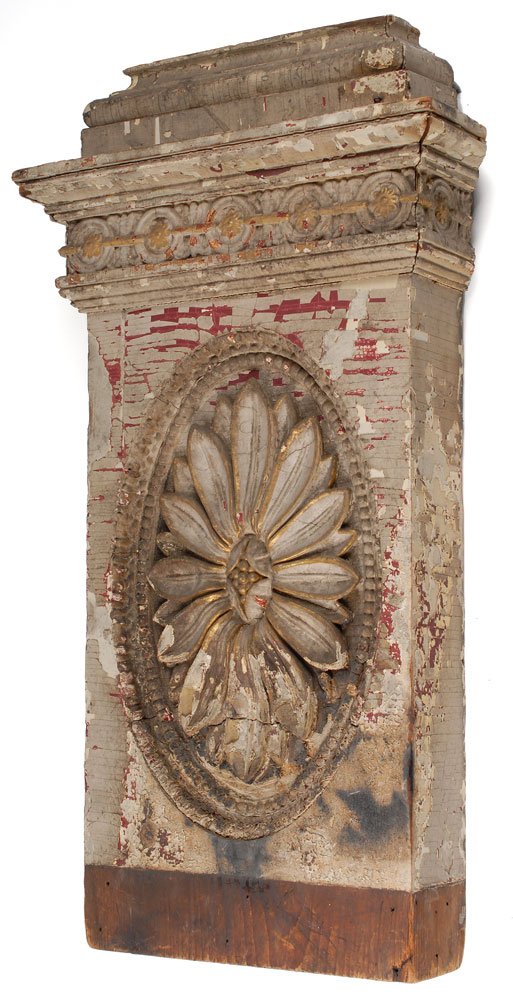 A remarkable original circa 1817 wooden plinth from the White House as reconstructed during the presidency of James Madison after its burning in 1814, removed from the Cross Hall during the extensive renovations undertaken in 1902 by Theodore Roosevelt.

The Plinth, from what we have been able to research to date, is the only known piece of the White House to exist in it's original form from the 1817 White House, containing 17 layers of paint and three layers of gold leaf. The Plinth was located in the main hall of The White House, easily observed through the Main Entrance, till it's removal in the 1902 renovation by President Theodore Roosevelt. Due to the 1902 Renovation and President Truman's reconstruction in 1950, the original interior pieces from the 1817 White House no longer exist, in our current White House. This plinth, a decorative architectural ornament used as a base, sat at the bottom of the trim outlining one of two niches in the Cross Hall, the broad eighty-foot long hallway on the first floor that provides access to the State Dining Room, East Room, Red Room, Blue Room, and Green Room. The niches, situated between the entrances of the Red, Blue, and Green Rooms, were originally meant to hold large iron heating stoves and used in this capacity until at least 1850.

The piece measures approximately 14 x 30 x 4 and is constructed of a pine base with pine moldings, cast composition ornaments, and hand-forged nails. According to preeminent White House historian William Seale, the plinth’s neoclassical design conforms to the other decorations that architect James Hoban used while rebuilding the White House between 1814 and 1817, and “there is no reason whatsoever to think that the plinths were replaced between the completion of the rebuilt house in late 1817 and 1902, when they were removed.” The plinth is coated with a remarkable seventeen layers of paint, three of which incorporate period applications of decorative gold leaf on the ornamentation. Comparing this evidence with the number of presidents living in the White House during this time period, it seems that the hallway was repainted each time a newly elected president moved in. In essence, this plinth represents the entire history of the White House during the great majority of the 19th century.

After Theodore Roosevelt unexpectedly took office in 1901 following the assassination of President McKinley, he hired the architectural firm McKim, Mead & White to undertake a major renovation of the White House. He desired to return the building to its Federalist roots by removing the Victorian-era ‘modernization’ of the decor, much of which had resulted from a less substantial renovation overseen by Chester A. Arthur in 1873. One of Roosevelt’s more controversial changes was the removal of an expensive glass screen—situated opposite this plinth in the main hall—designed by Louis Comfort Tiffany. However, these changes were as practical as they were aesthetic. The main offices were growing cramped with an ever-increasing staff, and one of Roosevelt’s major additions was the construction of the West Wing—an architectural feature now synonymous with the presidency itself.

During the renovations in the summer and autumn of 1902, the interior of the White House was entirely stripped down to its plaster walls. The excess material was strewn outside the mansion to be disposed of later. Relic hunters inevitably swarmed the piles of wood, plaster, glass, curtains, and other remnants in order to have a piece of the historic home for themselves. This piece originates from the great-grandson of one of these relic collectors. Despite the apparent availability of such pieces in 1902, they have largely been lost to history; the few fragments of the original White House that are known were used to make some sort of souvenir, such as a small box or gavel. This is, as far as we can discern, the only White House piece that retains its original paint. Seated in the primary hallway on the first floor of the White House, this plinth is a true witness to history that represents the lives—public and private—of the presidents from Madison to Roosevelt. Oversized.