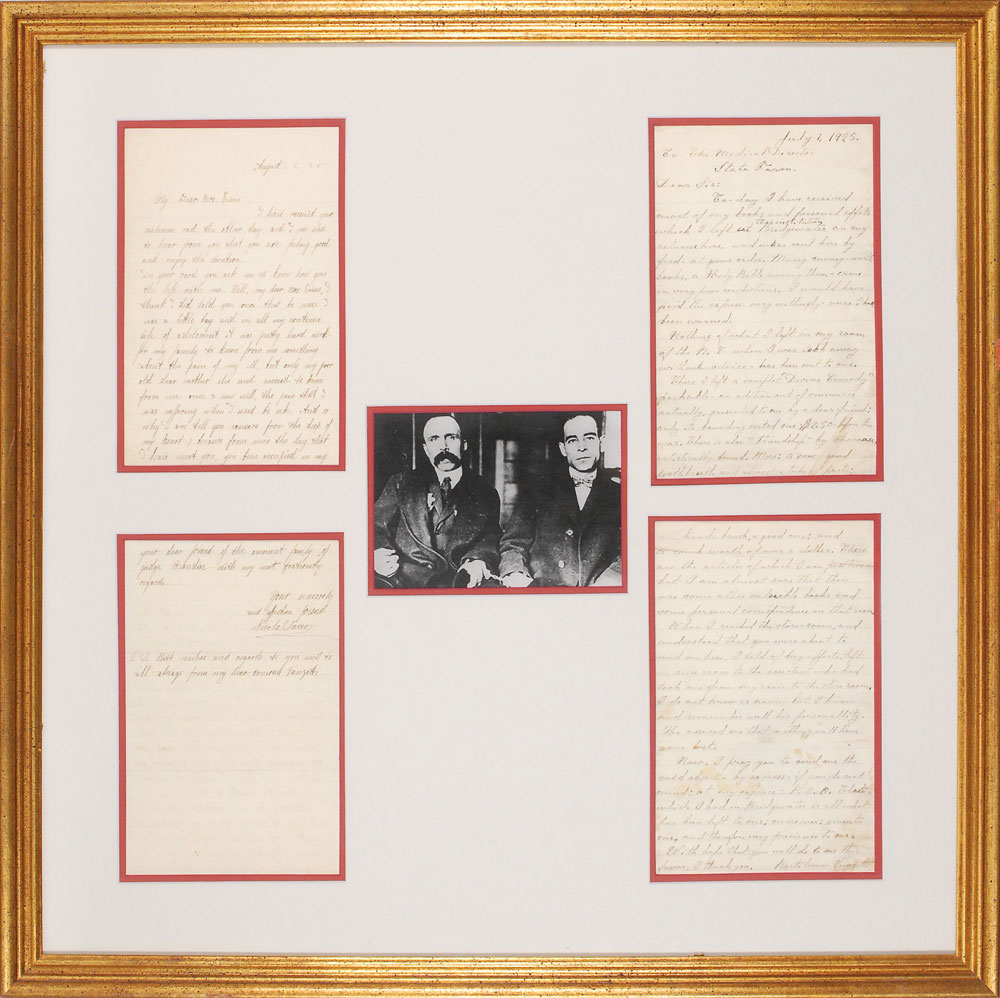 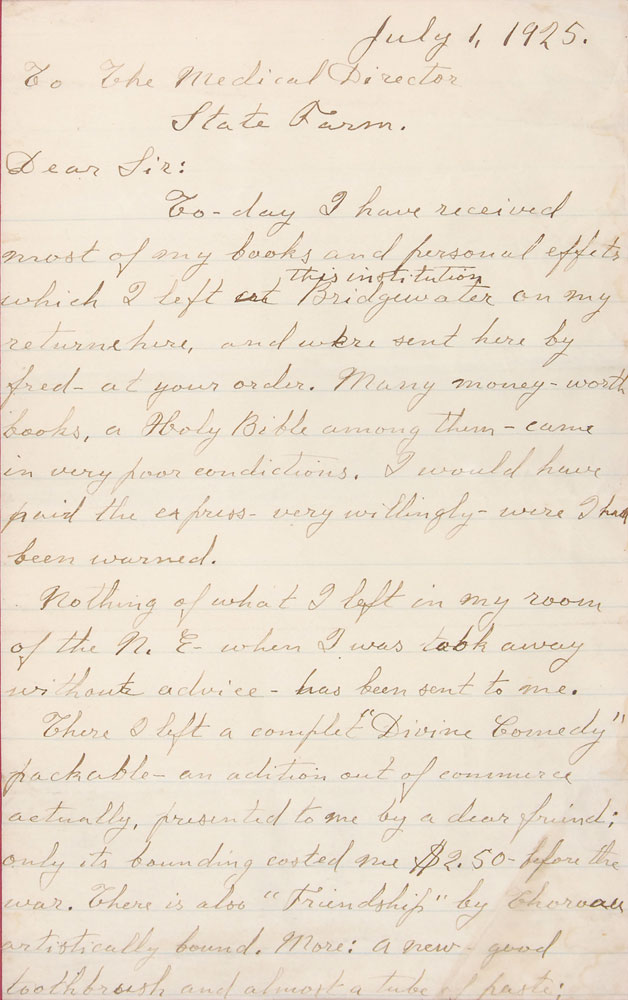 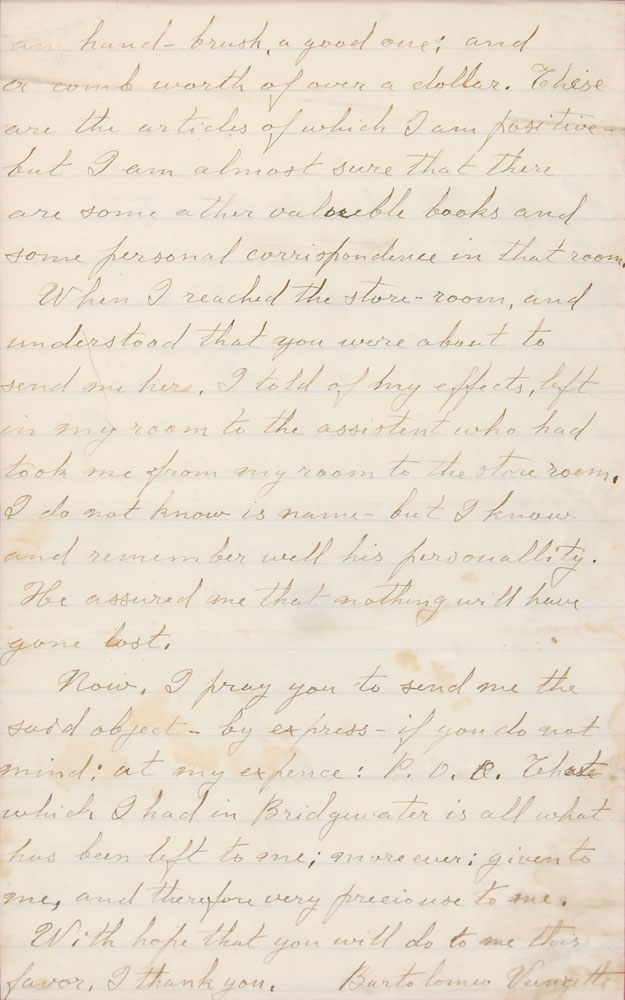 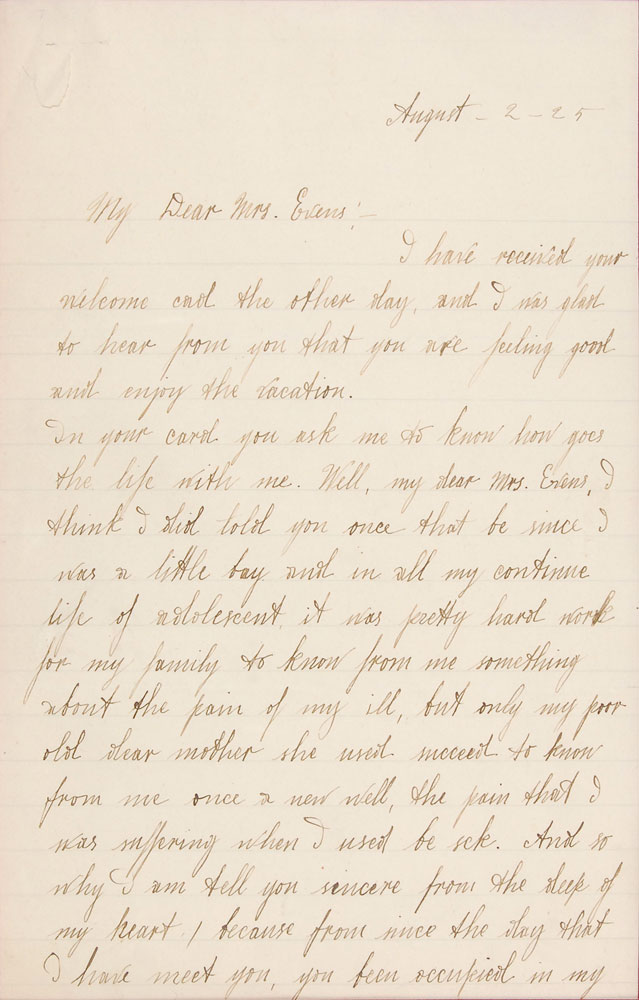 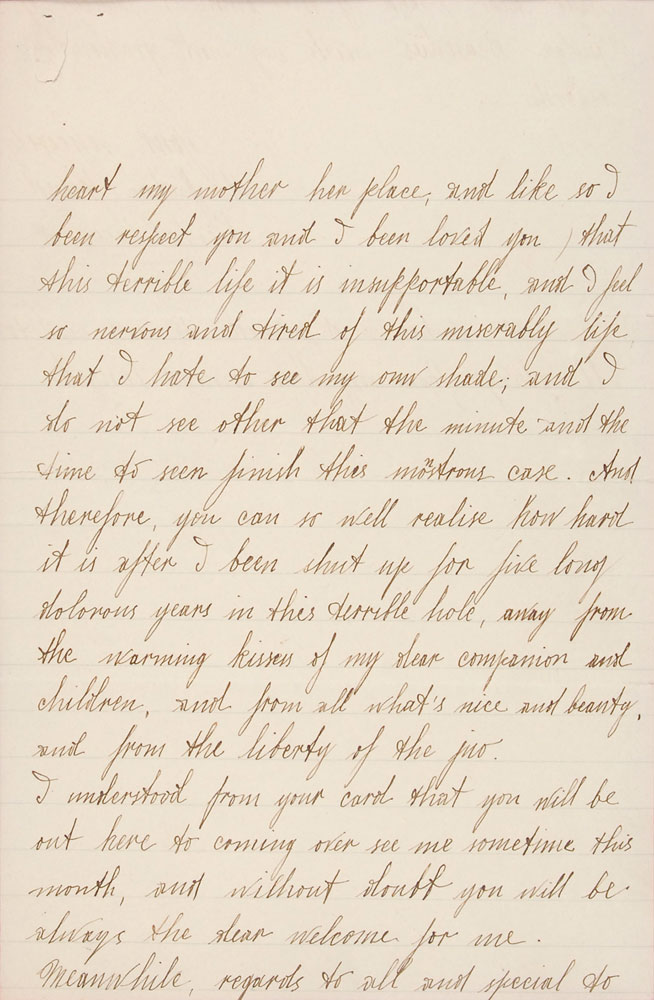 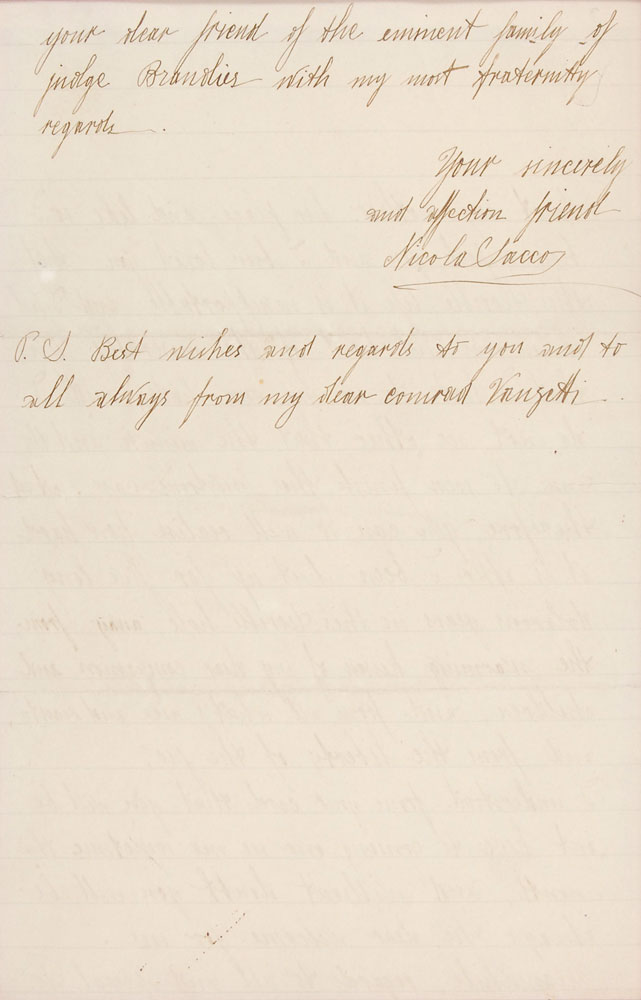 Two extremely rare letters: ALS signed "Nicola Sacco," three pages on two lightly-lined sheets, 5.25 x 8.5, August 2, 1925. Letter to Mrs. Evans. In part [grammar retained]: "I have received your welcome card the other day, and I was glad to hear from you that you are feeling good and enjoy the vacation. In your card you ask me to know how goes the life with me. Well, my dear Mrs. Evans, I think I did told you once that be since I was a little boy and in all my continue life of adolescent, it was pretty hard work for my family to know from me something about the pain of my ill, but only my poor old dear mother she used succeed to know from me once a new well, the pain that I was suffering when I used to be sik. And so why I am tell you sincere from the deep of my heart (because from since the day that I have meet you, you been occupied in my heart my mother her place, and like so I been respect you and I been loved you) that this terrible life it is insupportable, and I feel so nervous and tired of this miserably life that I hate to see my own shade; and I do not see other that the minute and the time to seen finish this monstrous case. And therefore, you can so well realise how hard it is after I been shut up for five long dolorous years in this terrible hole, away from the warming kisses of my dear companion and children, and from all what's nice and beauty, and from the liberty…I understood from your card that you will be out here to coming over to see me sometime this month, and without doubt you will be always the dear welcome for me. Meanwhile, regards to all and special to your dear friend of the eminent family of judge Brandeis with my most fraternity regards…P. S. Best wishes and regards to you and to all always from my comrad Vanzetti." In fine condition. The recipient, Elizabeth Glendower Evans, was a prominent social activist and reformer who became a director of the ACLU in the 1920s and was thus involved in the Sacco-Vanzetti case. A key figure in the cause celebre, she provided important financial support and enlisted many of the intellectual figures that came to publicly speak on their behalf, including H. L. Mencken, Felix Frankfurter, and William G. Thompson, who eventually became their chief defense lawyer. Sacco became extremely close to her, eventually calling her 'mother,' and the last words he uttered before his electrocution were for her: 'Farewell, Mother.'

ALS signed "Bartolomeo Vanzetti," two pages on two lightly-lined sheets, 5.5 x 9, July 1, 1925. Letter to the medical director of State Farm. In part [spelling and grammar retained]: "To-day I have received most of my books and personal effects which I left at this institution Bridgewater on my returne here, and were sent here by fred—at your order. Many money-worth books, a Holy Bible among them—came in very poor conditions. I would have paid the express—very willingly—were I had been warned. Nothing of what I left in my room of the N. E. when I was took away without advice—has been sent to me. There I left a complet 'Divine Comedy' packable—an adition out of commerce actually, presented to me by a dear friend; only its bounding costed me $2.50—before the war. There is also 'Friendship' by Thoreau, artistically bound. More: a new-good toothbrush and almost a tube of paste; an hand-brush, a good one; and a comb worth of over a dollar. These are the articles of which I am positive—but I am almost sure that there are some other valuable books and some personal corrispondence in that room. When I reached the store-room, and understood that you were about to send me here, I told of my effects, left in my room to the assistent who had took me from my room to the store-room. I do not know is name—but I know and remember well his personality. He assured me that nothing will have gone lost. Now, I pray you to send me the said object—by express—if you do not mind: at my expence." Scattered creases and a few small stains, otherwise fine condition. Vanzetti was an avid reader and certainly the more intellectual of the two—he knew little English at the time of his arrest in 1920, but by the time of his execution had mastered the language and produced a relatively prolific body of philosophic work. Journalist Murray Kempton later described him as 'the greatest writer of English in our century to learn his craft, do his work, and die all in the space of seven years.' Vanzetti read the likes of Zola, Darwin, Marx, Tolstoy, and Carducci, but his favorite books were Dante's The Divine Comedy and Ernest Renan's The Life of Jesus—he was said to never travel without them. This letter demonstrate the importance of these works to him—literature had helped him form his political ideology, and he looked to books for comfort while imprisoned.

The letters are double-matted and framed together with a portrait of Sacco and Vanzetti to an overall size of 25.5 x 25.5, with a window in the backing to view the reverse page of the Sacco letter. This is an excessively rare pairing with ideal content from both men, with Sacco's emotional letter describing the depressing confines of his prison cell and Vanzetti demonstrating his intellect and concern for his possessions. RR Auction COA.