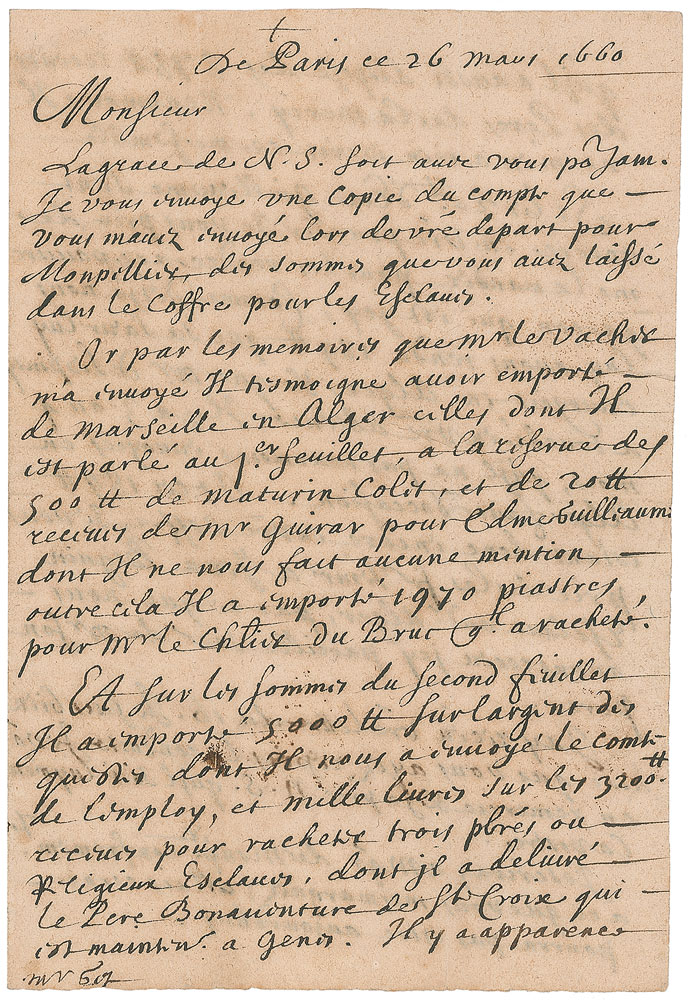 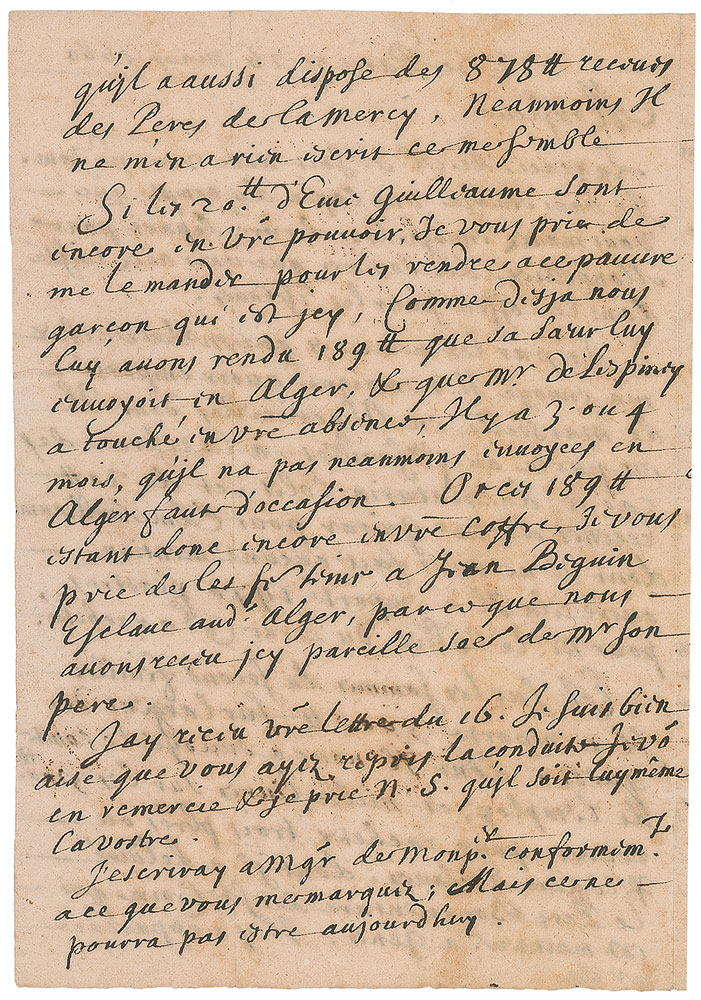 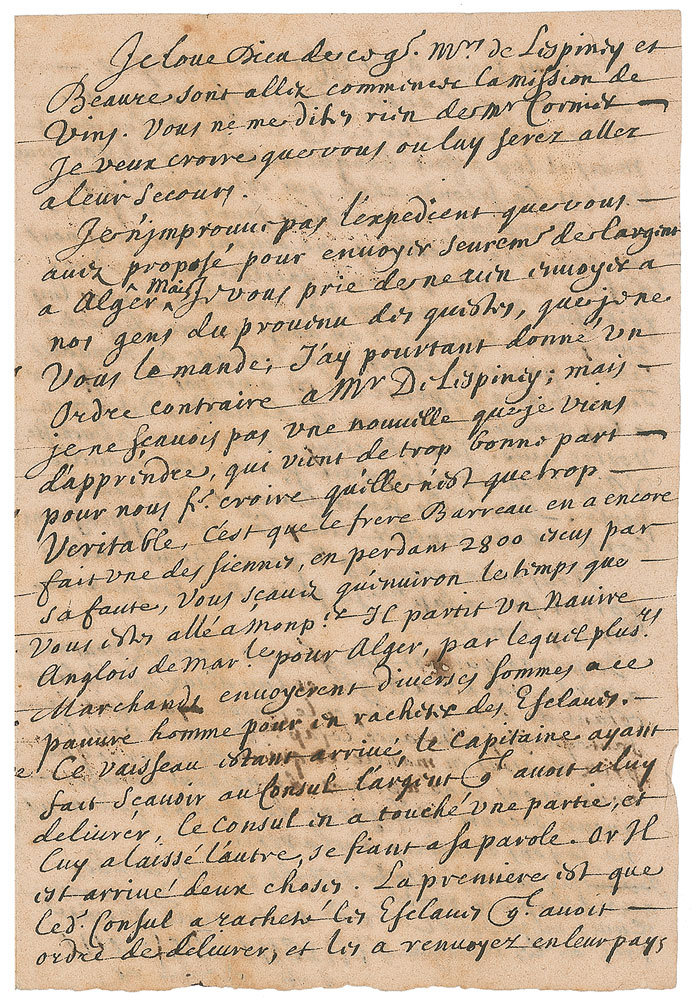 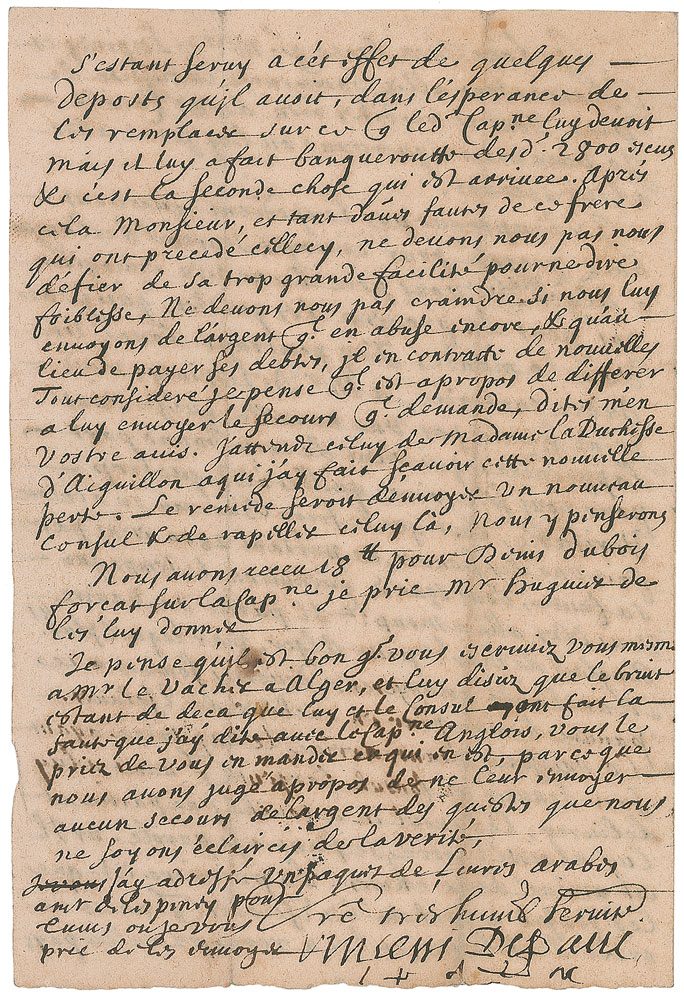 Catholic priest (1581–1660) canonized in 1737, known as the patron saint of all works of charity. He had been abducted by the Barbary pirates and held captive as a slave for two years before escaping and returning to France, where he dedicated the rest of his life to alleviating poverty and aiding those who suffer. LS in French, signed “Vincent DePaul,” four pages on two adjoining sheets, 4.5 x 6.5, March 26, 1660. Important letter concerning irresponsible handling of funds intended to pay ransoms demanded by the Barbary pirates, who were holding thousands captive in Algiers. In part (translated): "I do not disapprove the expedient that you have proposed for sending money safely to Algiers. But I beg you to send to our people nothing issued from the collections until I let you know. Nevertheless, I gave a contrary order to M. de Lespiney; but I was unaware of a piece of news which I have just learned, which comes from too good a source for us not to believe that it is only too true. It is that Brother Barreau has again played one of his pranks, in losing 2800 sous by mistake. You know that, about the time you went to Montpellier, an English ship left Marseilles for Algiers, by which several merchants were to send various sums to this poor man for ransoming slaves. This vessel having arrived, and the Captain having made known to the Consul the money which he had to deliver to him, the Consul received one part of it, and entrusted the other to him, relying on his word. But now, two things happened. The first is that the said Consul ransomed the Slaves whom he had orders to deliver, and sent them home, using for this purpose some deposits he had, in the expectation of replacing them with what the said Captain owed him; but he forfeited to him the said 2800 sous, and this is the second thing that happened. After that Sir, and so many other mistakes, by this brother, preceding this one, ought we not to distrust his too great readiness to repeat weakness. Ought we not to fear, if we send him money, that he will misuse it again and that, instead of paying his debts, he will contract new ones? All considered, I think it proper to delay sending him the help he asks." In fine condition, with slight show-through from writing to opposing sides.

While St. Vincent de Paul's accomplishments covered a broad range of social issues—prison reform, free education for children, the establishment of orphanages and old age homes, relief to areas devastated by the Thirty Years' War—the cause closest to his heart was freeing the slaves held in captivity in North Africa, having never forgotten his own experiences. In 1646 he was allowed to establish a Lazarist mission in Algiers, with the express purpose of ministering to the many Christian slaves held captive there, attending to their physical and spiritual needs. At this time, Jean Barreau was appointed to the duties of French consul and vicar-apostolic of the regencies of Algiers and Tunis. Although Barreau had good intentions he frequently got himself into trouble, finding himself imprisoned multiple times over the course of the next decade for not fulfilling promises to pay ransoms—the reason for De Paul's concern that he would contract new debts instead of paying existing ones. This culminated in a situation in 1656 where Barreau was imprisoned and beaten into unconsciousness, then had awls driven under his fingernails. The prisoners themselves were able to raise the funds to free him as a demonstration of their gratitude. Nevertheless, De Paul was obviously fed up with Barreau's administrative failures and inadvertent undermining of their cause, recognizing "so many other mistakes, by this brother, preceding this one." By the end his life, St. Vincent de Paul had raised sufficient funds to ransom 1,200 Christian slaves and this is an extraordinary letter discussing these very matters, portraying his empathetic involvement in charity. Pre-certified John Reznikoff/PSA/DNA and RR Auction COA.