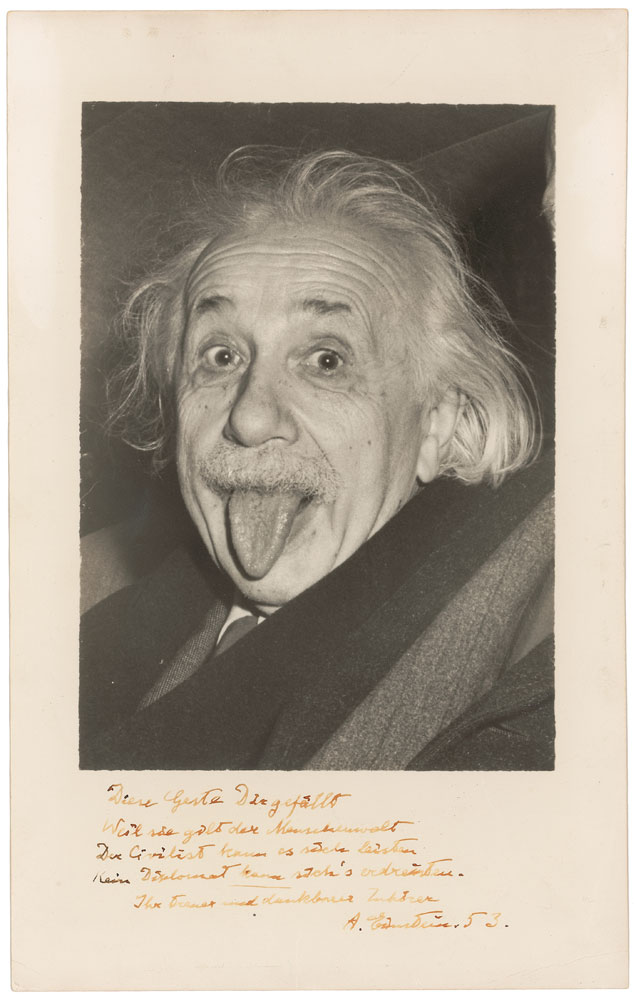 Amazing and extremely rare matte-finish 7 x 11 world-famous photo of Albert Einstein sticking out his tongue, signed in the lower border in fountain pen in German rhyme, “Diese Geste Dir gefällt, Weil sie gelt der Menschenwelt, Der Civilist kann sich’s leisten, Kein Diplomat kann sich’s erdreisten. Ihr Freund und dankbarer Zuhörer,” translated to “This gesture you will like, Because it is aimed at all of humanity. A civilian can afford to do what no diplomat would dare. Your loyal and grateful listener, A. Einstein 53.” In fine condition, with some light creases to corners and the inscription and signature a bit light due to irregular ink flow.

This iconic photo of Einstein was taken on his 72nd birthday, March 14, 1951, by United Press International photographer Art Sasse. After a birthday celebration, Einstein was mobbed by photographers and reporters as he made his way into a friend's car to go return home. Sasse held back until he could get closer, then yelled to get his attention, 'Ya, Professor, shmile for your birthday picture, ya?' Tired of smiling for the cameras all day long, Einstein turned around and stuck out his tongue. Luckily, Sasse was quick enough to capture the moment and create what has become one of the most well-known photographs of the 20th century. The original photo shows Einstein in between Dr. Frank Aydelotte, the former head of the Institute for Advanced Study, and his wife. After seeing it in the newspaper, Einstein sent a letter to International News Photos to request nine prints to give to his friends, and asked that the image be cropped to show his face only. This is one of these examples—an original print, cropped per Einstein's specifications and given to him to distribute to close friends.

The recipient of this particular signed photo was noted journalist Howard K. Smith, probably while he was chief correspondent for CBS and stationed in London. Einstein listened to Smith's hour-long news broadcast every Sunday at noon, always making sure his schedule was clear—something that he points out by signing as a "loyal and grateful listener." Between the extraordinarily famous image and connection between Einstein and Smith, this is undoubtedly one of the most desirable Einstein pieces extant—the most famous photograph of the most famous man of the 20th century.