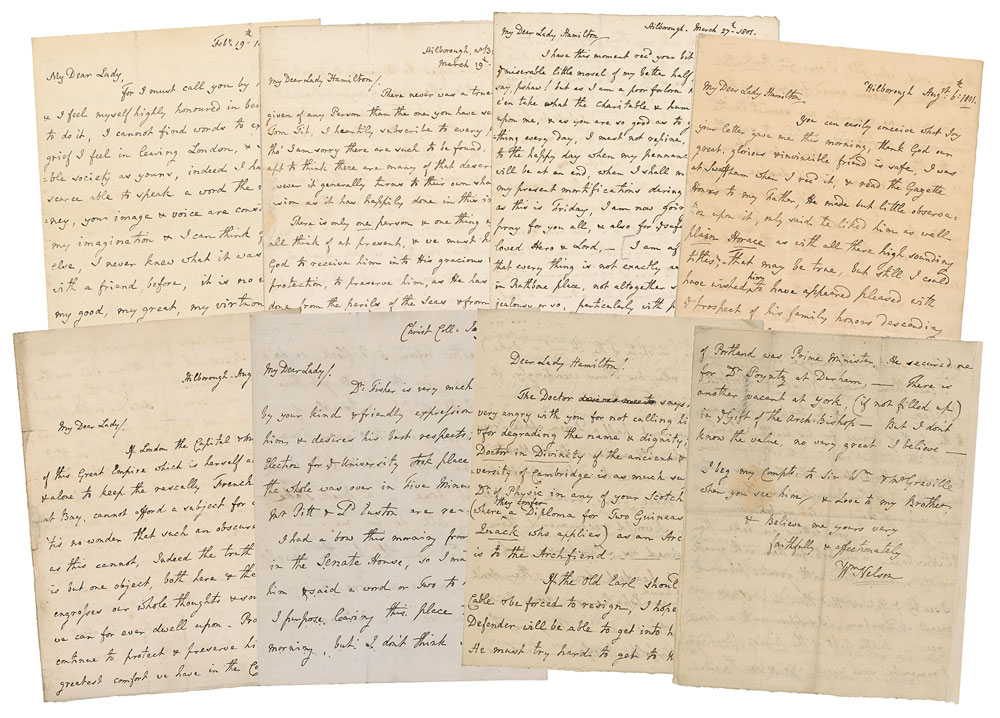 Reverend and elder brother (1757–1835) of Horatio Nelson. Archive of seven ALSs written by William Nelson to Lady Hamilton, each signed “Wm. Nelson,” totaling 22 pages, dated 1801–1802. Each is affixed at the left edge into a larger folder. A selection of the letters follows:

The earliest, from February 19, 1801, in part: "I cannot find words to express the grief I feel in leaving London, & such admirable society as yours, indeed I have been scarce able to speak a word the whole journey, your image & voice are constantly before my imagination & I can think of nothing else…it is no wonder that my good, my great, my virtuous, my beloved Brother should be so much attached to your Ladyship after so long a friendship when I feel so much after so short an acquaintance…had Tom Tit done half as much he might have insured the blessing of the whole family instead of the curses."

The second, March 19, 1801, in part: "There never was a truer character given of any person than the one you have sent me of Tom Tit…There is only one person & one thing we can all think of at present, & we must heartily pray God to receive him into His gracious & Almighty protection, to preserve him, as He has hitherto done, from the perils of the seas & from the efforts of the Enemy…I am in great hopes the Danes will give in without a battle."

March 27, 1801: "I am afraid with you that every thing is not exactly as we could wish…not altogether so sincere, a little jealousy or so…I may be wrong but it is best to beware. I shall be heartily glad whenever we can say Peace & our great Lord safe home—I hope the treaty between France and Naples will not affect his Property & Title at Bronte…pray God when we meet it may be with cheerful hearts for the welfare of our Great Hero—if he comes home safe this time, I sincerely hope he will give it up."

August 6, 1801: "Thank God our great, glorious & invincible friend is safe…Mrs Bolton made no remarks nor seemed in the least elated or pleased, indeed to say the truth three appears to be a gloom about them all, for what reason I can't devise, unless they are uneasy Tom Tit does not share in it, to whom I verily believe & think they are secretly attached."

August 13, 1801: "If London the capital & metropolis of this Great Empire which is herself able, single & alone to keep the rascally French Villains at bay, cannot afford a subject for a letter 'tis no wonder that such an obscure village as this cannot…Now we have secured the Peerage we have only one thing to ask, & that is my promotion in the Church, handsomely & honourably, such as becomes Lord Nelson's Brother." The remaining two letters discuss local politics and matters within the clergy. In overall very good to fine condition. RR Auction COA.