Extremely rare twice-signed contract for her Asbury Park concert, one week after Woodstock 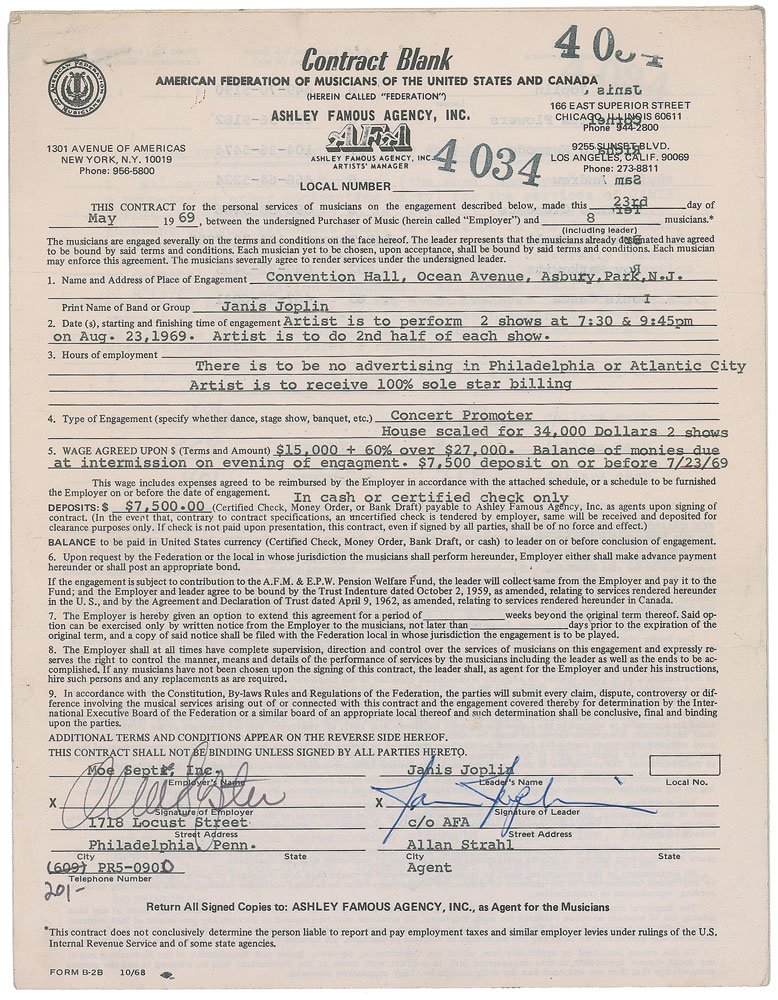 Extremely rare twice-signed contract for her Asbury Park concert, one week after Woodstock

DS, one page, 8.5 x 11, May 23, 1969. Standard contract in which Joplin agrees “to perform 2 shows at 7:30 & 9:45 pm on Aug. 23, 1969. Artist is to do 2nd half of each show,” at the Convention Hall in Asbury Park, New Jersey, for “$15,000 + 60% over $27,000.” The names of the members of her band are typed on the reverse, including Cornelius Flowers, Richard Kermode, Sam Andrew, Terence Clements, Brad Campbell, Roy Markowitz, and Luis Gasca. A three-page rider is stapled to the contract, also signed by Joplin, which details ticket prices and advertising requirements, stage and lighting requirements, and grants her exclusive rights to sell souvenirs such as posters and programs. In fine condition, with expected document wear.

This document dates to shortly after Joplin had disbanded from Big Brother and the Holding Company and formed the Kozmic Blues Band with the musicians listed on the reverse of the main contract. Interestingly, Sam Andrew had left the band and returned to Big Brother and the Holding Company by the time the concert took place. The James Cotton Band opened the show, and members of the band Child—led by the 20-year-old Bruce Springsteen—were their guests backstage. Most importantly, however, is the date of the performance—it was exactly one week after her performance at Woodstock on August 16, 1969, and was her first performance following the legendary music festival. A supremely desirable piece of music history.