Remarkable original painting by General Eisenhower of his wartime cottage, the “small house south of London where I lived while planning both Torch (1942) and Overlord (1944)” 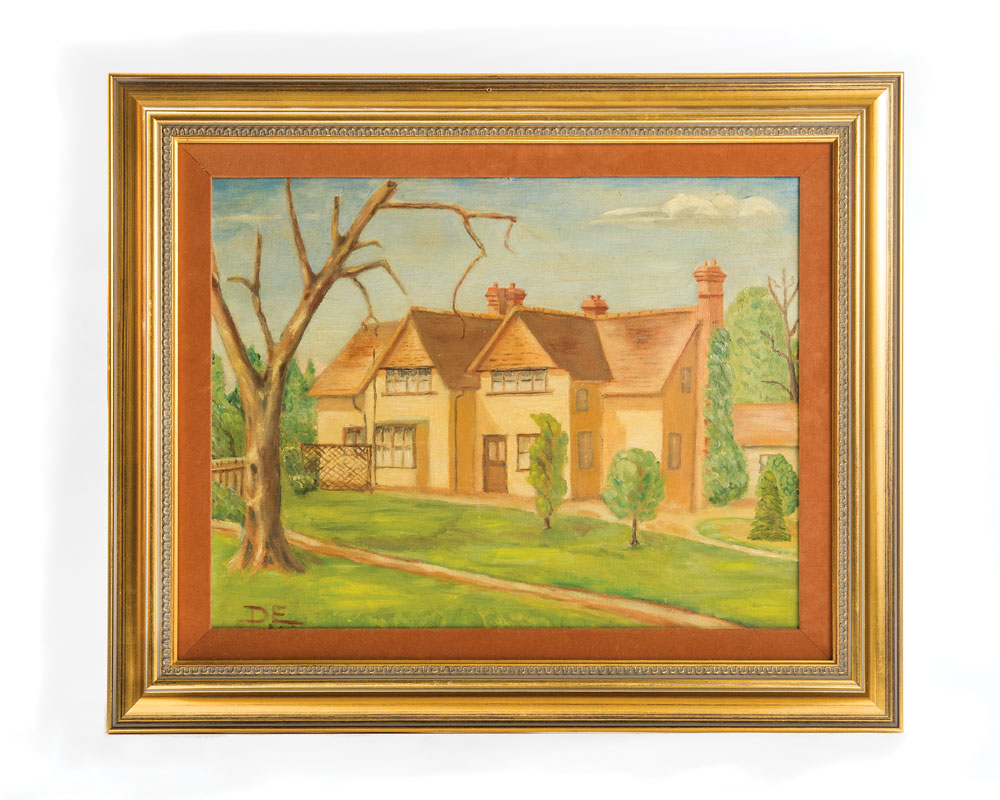 Remarkable original painting by General Eisenhower of his wartime cottage, the “small house south of London where I lived while planning both Torch (1942) and Overlord (1944)”

Extraordinary original oil painting by General Dwight D. Eisenhower, 17.25 x 13.5, depicting his wartime retreat outside of London known as Telegraph Cottage, signed in the lower left in red paint, “DE.” Also signed and historically inscribed on the stretched canvas’s black backing in pencil, “Telegraph Cottage—small house south of London where I lived while planning both Torch (1942) and Overlord (1944). Painted for Master Sgt. Moaney in 1949 from a water color. Dwight D. Eisenhower, Jan. 1, 1950.” Beautifully suede-matted and framed to an overall size of 23.5 x 19.5.

Includes a detailed letter of provenance on White House letterhead signed by Delores Moaney, the Eisenhower family's cook and the widow of Sgt. John Moaney. Her husband had served as Dwight D. Eisenhower’s close personal valet from 1942 until the president's death in 1969. In part: "This is an original oil painting by then General Dwight D. Eisenhower…the painting is of Telegraph Cottage, a small house south of London, where Ike lived while he was the Supreme Commander Allied Forces…My husband, Sgt. John Moaney, met President Eisenhower in 1942 and served as his personal valet and friend until Eisenhower's death in 1969…This original oil painting has been authenticated by him, with his note on the back. We also loaned this painting to the Gallery of Modern Art in N.Y. in 1967, for a temporary Eisenhower exhibition. It was also on loan for a while at the Eisenhower Presidential Library." Also includes two small photos of the painting as it hung in President Eisenhower's pressing room on the third floor of the White House during Sgt. Moaney's service there from 1953 to 1961, a glossy photo and magazine clipping depicting the cottage, a transcript of a 1972 interview with Sgt. Moaney conducted by the Eisenhower Presidential Library in which he mentions Telegraph Cottage over a dozen times along with this very painting, and a modern print of a photo showing Sgt. Moaney with President Eisenhower.

With tremendous significance and magnificent provenance, this is a positively remarkable painting by one of the most influential figures of the 20th century. Dwight D. Eisenhower took up painting as a hobby later in life—a practice suggested by Winston Churchill—as a tool for relaxation, and became quite a skilled artist in his own right. Approximately 260 works by Dwight D. Eisenhower are known, most of which are landscape scenes, with some portraits portraying his family members or notable figures, but few if any have historical importance of the same magnitude as this artwork depicting Telegraph Cottage. We are unaware of any other Eisenhower painting with such an historically detailed holograph on the reverse. As the location of General Eisenhower's main office while commanding the Allied Expeditionary force, Telegraph Cottage was where the general planned two of the war's most important invasions—as he attests to himself on the reverse—in Torch, the invasion of North Africa, and Overlord, the D-Day invasion of Normandy. Also of interest is the association with Sgt. John Moaney; Telegraph Cottage is where the two first met, and this time-consuming, stunning, and thoughtful gift to Sgt. Moaney demonstrates their close relationship. In his informal memoir, At Ease: Stories I Tell My Friends, Dwight D. Eisenhower describes Sgt. John Moaney as someone who was indispensable to him throughout his life. This noteworthy painting is undoubtedly a quintessential piece of history deserving of the most discriminating collector or institution.