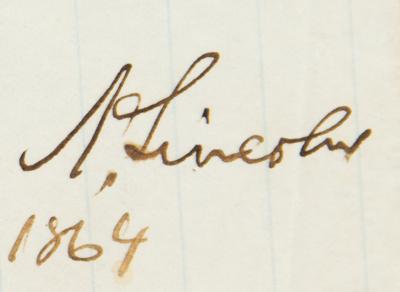 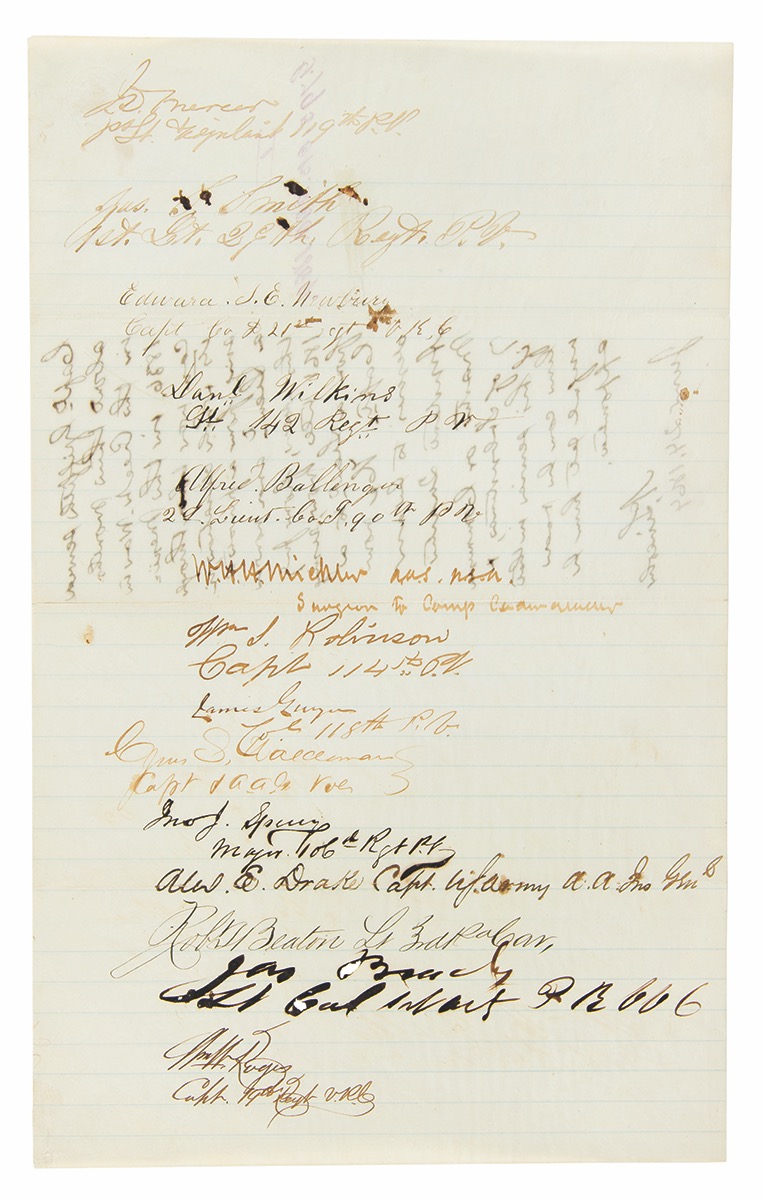 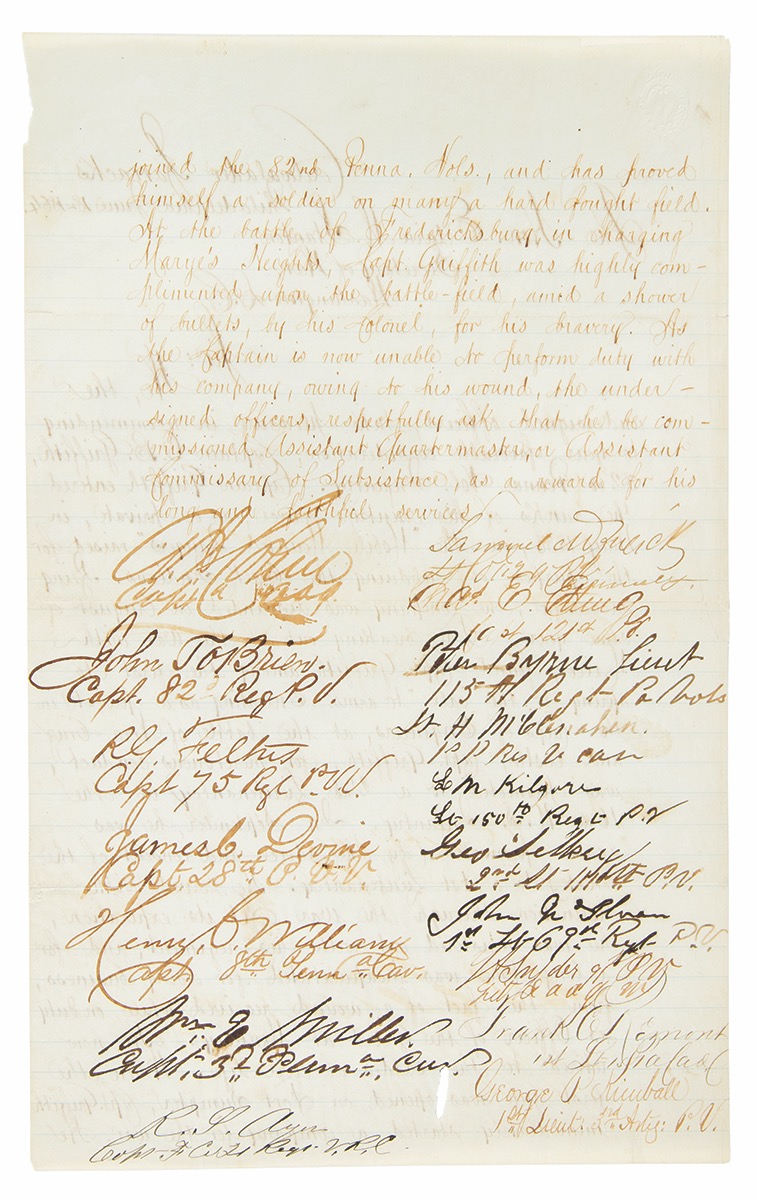 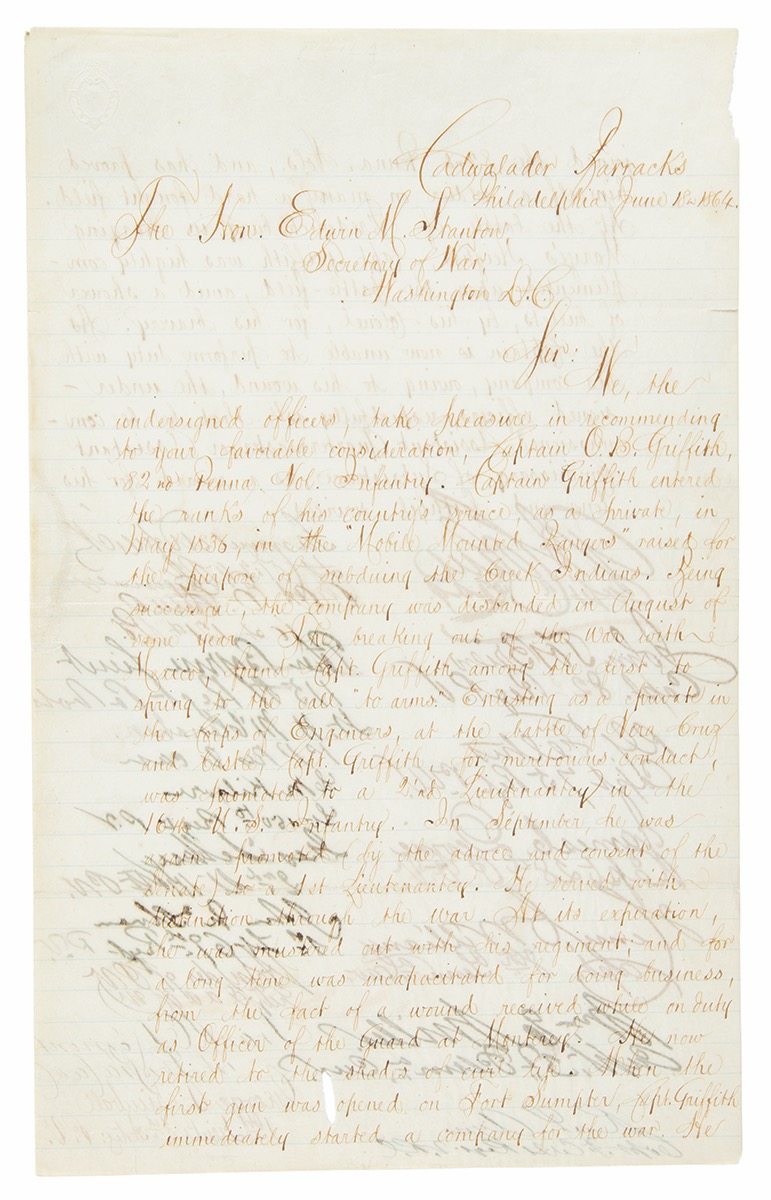 Historic autograph endorsement signed as president, “A. Lincoln,” originally penned on the reverse of a letter written to Secretary of War Edwin Stanton and signed by more than 30 officers of the Pennsylvania Volunteers, two pages both sides, 7.5 x 12, June 24, 1864. President Lincoln endorses the promotion of a captain in the 82nd Pennsylvania Volunteer Infantry. Lincoln writes, in full: "Capt. Griffith served about three months in the Creek War in 1836, in the Mexican War through its whole duration, rising from a private to a Lieut., and now in this war, from July 1861 till now, rising from a Lieut. to a Capt. He now desires to be an Assistant Quarter Master, or Commissary of Subsistence, & if his service in that line can be now useful let him be appointed." The letter to Stanton, written from Cadwalader Barracks in Philadelphia on June 18, 1864, describes Captain O. B. Griffith's career of service and recommends his promotion: "When the first gun was opened on Fort Sumpter, Capt. Griffith immediately started a company for the war. He joined the 82nd Penna. Vols., and has proved himself a soldier on many a hard fought field. At the battle of Fredericksburg, in charging Marye's Heights, Capt. Griffith was highly complimented upon the battle-field, amid a shower of bullets, by his Colonel, for his bravery. As the Captain is now unable to perform duty with his company, owing to his wound, the undersigned officers, respectfully ask that he be commissioned Assistant Quartermaster, or Assistant Commissary of Subsistence, as a reward for his long and faithful services." In fine condition, with a tiny hole at the bottom of the first page. Accompanied by color copies of the reverse of each page. A superb, highly desirable presidential endorsement in support of a Civil War hero.