“You never can tell what the Senate will talk about or what it’ll do after it talks...conversation in the Senate is for publication not for voting purposes” 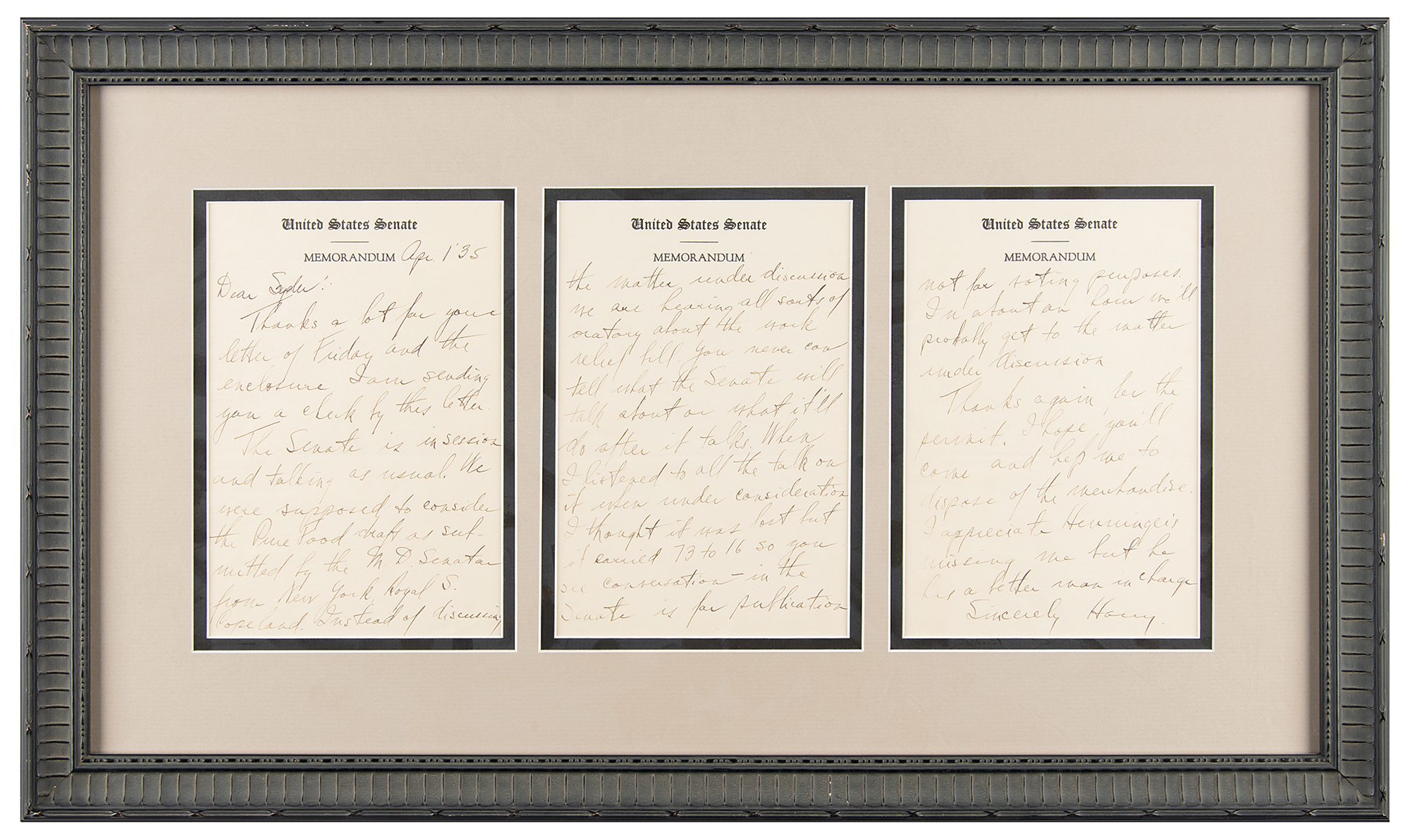 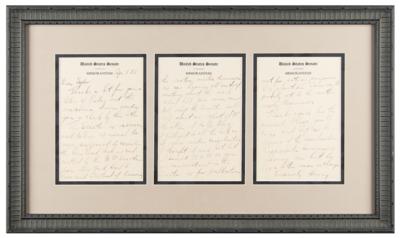 Previous Lot
Next Lot
Login or Register To Bid Add to BidTracker
Estimate: $1500+

“You never can tell what the Senate will talk about or what it’ll do after it talks...conversation in the Senate is for publication not for voting purposes”

Rare ALS signed "Harry," three pages, 5 x 7.5, United States Senate letterhead, April 1, 1935. Handwritten letter to John Snyder, later his Secretary of the Treasury. In full: "Thanks a lot for your letter of Friday and the enclosure. I am sending you a check by this letter. The Senate is in session and talking as usual. We were supposed to consider the Pure Food draft as submitted by the M.D. Senator from New York, Royal S. Copeland. Instead of discussing the matter under discussion we are hearing all sorts of oratory about the work relief bill. You never can tell what the Senate will talk about or what it'll do after it talks. When I listened to all the talk on it when under consideration I thought it was lost but it carried 73 to 16 so you see conversation in the Senate is for publication not for voting purposes. In about an hour we'll probably get to the matter under discussion. Thanks again for the permit. I hope you'll come and help me to dispose of the merchandise. I appreciate Henninger's missing me but he has a better man in charge." Beautifully double-matted and framed to an overall size of 23.5 x 14. In fine condition.

After Truman was sworn in as US senator in January 1935, his regiment command was given to his friend, Lieutenant Colonel John W. Snyder, this letter's recipient. Truman writes that although he appreciates being missed by Lieutenant Henninger, he now "has a better man in charge." Barely three months into his senatorial duties, Truman has realized that "you never can tell what the Senate will talk about or what it'll do after it talks." He observes that a work relief bill passed 73 to 16 in spite of "all the talk on it when under consideration."

He also refers to a fellow Democrat, Senator Royal S. Copeland, who would later show the assembled senators what he called a 'chamber of horrors' to demonstrate the need for revision of the Pure Food and Drug Laws. According to an Associated Press article recounting that day's senatorial debates, 'Senator Copeland, a physician, talking informally as if he were in a classroom, exhibited to the Senators bottles and packages of foods and drugs which he said were either fakes or dangerous.' Copeland's presentation evidently took place after Truman dispatched this letter, based on Truman's lament that they "were supposed to consider the Pure Food draft," but were instead consumed by more talk on the work relief bill. Ten years later, Truman would be in the White House and Snyder would be a member of his Cabinet.

Provenance: from the estate of Senator Carl Levin. A lifelong Democrat, ardent advocate for civil rights, and staple of the United States Senate from 1979 to 2015, Senator Levin was also a longtime client of RR Auction. As a collector, he favored his political heroes—Harry S. Truman, Franklin and Eleanor Roosevelt, and Martin Luther King, Jr.—as well as those figures emblematic of the American spirit, like Robert Frost, Joe Louis, and Helen Keller.