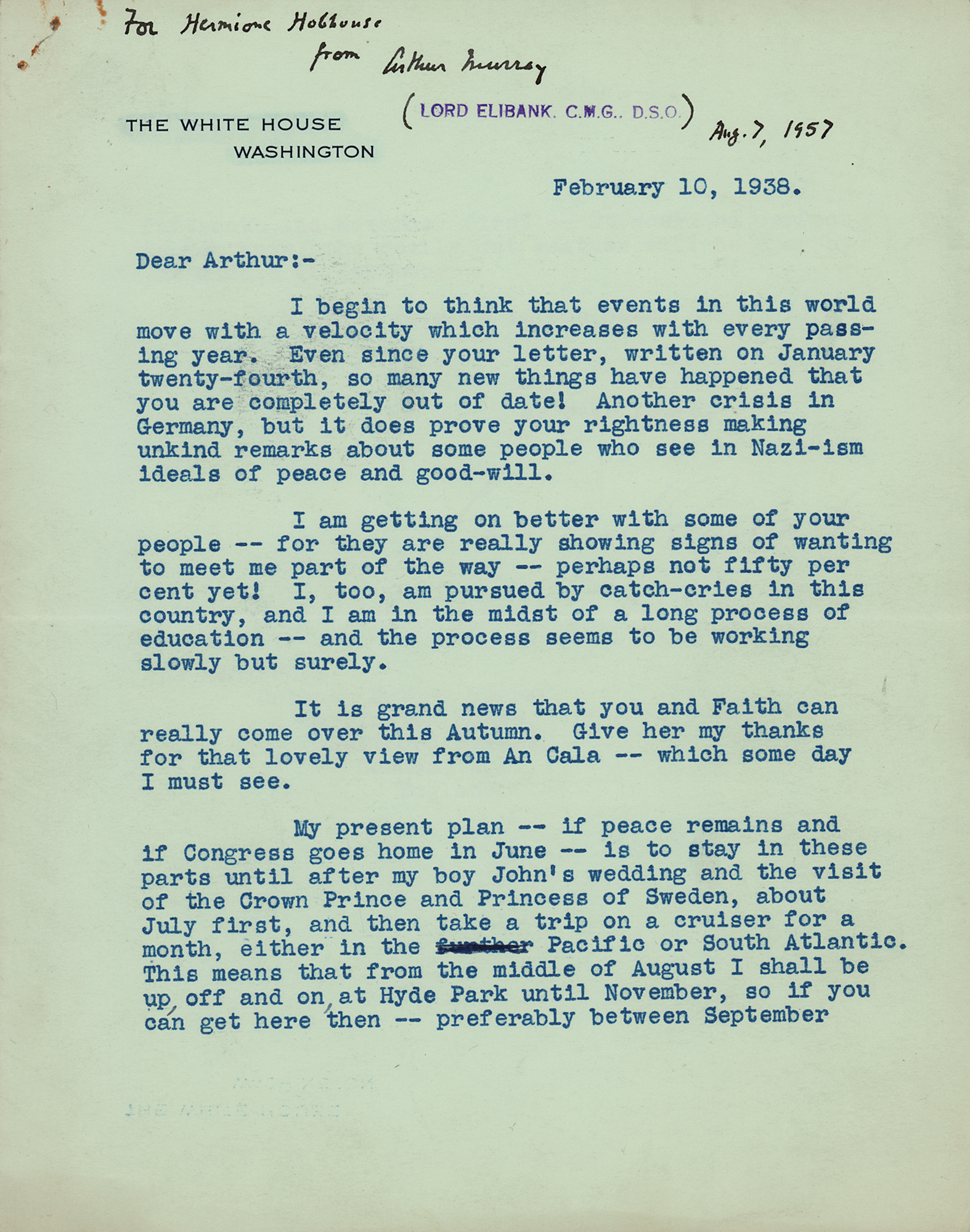 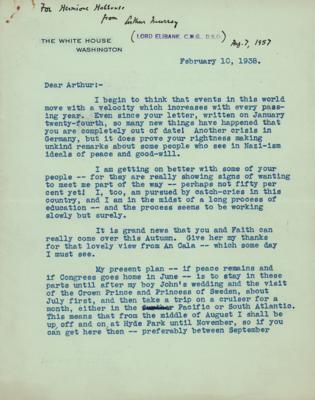 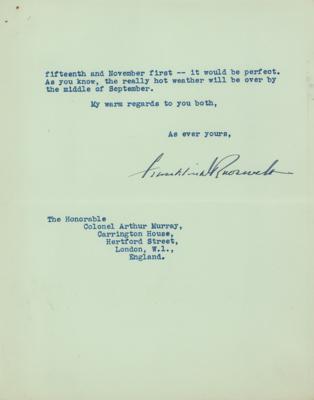 Previous Lot
Next Lot
Login or Register To Bid Add to BidTracker
Estimate: $6000+

TLS as president, two pages on two adjoining sheets, 7 x 9, February 10, 1938. A letter from Roosevelt to Colonel Arthur Murray, in full: “I begin to think that events in this world move with a velocity which increases with every passing year. Even since your letter, written on January twenty-fourth, so many new things have happened that you are completely out of date! Another crisis in Germany, but it does prove your rightness making unkind remarks about some people who see in Nazi-ism ideals of peace and good-will.

I am getting on better with some of your people—for they are really showing signs of wanting to meet me part of the way—perhaps not fifty percent yet! I, too, am pursued by catch-cries in this country, and I am in the midst of a long process of education—and the process seems to be working slowly but surely.

It is grand news that you and Faith can really come over this Autumn. Give her thanks for that lovely view from An Cala—which some day I must see.

My present plan—if peace remains and if Congress goes home in June—is to stay in these parts until after my boy John’s wedding and the visit of the Crown Prince and Princess of Sweden, about July first, and then take a trip on a cruiser for a month, either in the Pacific of South Atlantic. This means that from the middle of August I shall be up off and on at Hyde Park until November, so if you can get here then—preferably between September fifteenth and November first—it would be perfect. As you know, the really hot weather will be over by the middle of September.” In fine condition, with rusty staple holes to the upper left corner.

Accompanied by two TLS replies from Murray. The earlier two-page letter from February 20, 1938, in part: “The ‘velocity’ (to which you refer in your letter of Feb. 10), with which world events move, is increasing almost hourly! All the more reason that our statesmen here should take long views on the European situation, or they will never catch up—much less keep pace with—the changes that confront them as the days pass. But after all there was no reason why they should have been surprised at the latest turn of events, unless indeed they did not believe—as some of us have always believed—that Hitler’s eyes had a fixed stare in an easterly and south easterly direction, and that nothing would divert him from his objective.”

The later four-page letter from March 26, 1938, in part: “It may be well that the chickens which have been wandering through the tangled jungle of mistaken policies are now coming home to roost. Failure to read aright from the beginning the ambitions and aspirations of the Nazi regierung—of which failure, I trust, I am absolved by the tenor of my letters to you during the past year!—have caused the situation with which we stand confronted to-day to be infinitely more complex than it might otherwise have been…In the course of our daily tasks in life there is often set before us—with no other alternatives—a choice of evils. So far as the problem of Italy is concerned, I conceive the greater evil to be that as Germany grew stronger Italy, if left completely within her orbit, would inevitably become an obedient tentacle of the German octopus, and that a German ‘bloc’ from the Baltic to the Baltic to the Mediterranean (and possibly to the Bosphorus and the Black Sea) with all its probabilities of a world-hegemony-seeking conflict, would become an accomplished fact.”

In 1917, Arthur C. Murray was appointed as the Assistant Military Attache to the British Embassy in Washington, D.C. There, he met Franklin D. Roosevelt, who at that time was Assistant Secretary of the Navy in Woodrow Wilson's Democratic Administration. The two men struck up a close friendship that continued on and off until Roosevelt's death in 1945. Throughout the 1930s and the Second World War, the two men were engaged in an illuminating correspondence, of which this letter was part, that revealed the evolution of President Roosevelt’s foreign policy in the era of American isolationism and British appeasement.

President Roosevelt’s early tolerance of Adolf Hitler and the rise of Nazi Germany remains one of his legacy’s most controversial and dismaying chapters. Roosevelt didn’t approve of Hitler’s anti-Jewish policies, but because he feared that any U.S. criticism of the Nazi regime would harm American-German relations, FDR remained appreciably impartial to Hitler and his party; of the 430 press conferences that Roosevelt held between January 1933 and September 1938, never once did he outwardly criticize Hitler’s persecution of German Jews. Only once did the American public condemn Hitler’s Germany—this occurring after the fraudulent Munich Agreement and the horrific ‘Night of Broken Glass’ pogrom—was Roosevelt forced to ready America for a war with Germany. Whereas FDR remained impartial in his language to Murray—a month before the German annexation of Austria—Murray was anything but with FDR, making clear his opinion of the German threat. A fascinating if not unsettling letter from President Roosevelt.