Revolutionary traitor Benedict Arnold writes out and certifies an oath of allegiance for a fellow officer: "I will to the Utmost of my Power, support, maintain & defend the said United States against the said George the third" 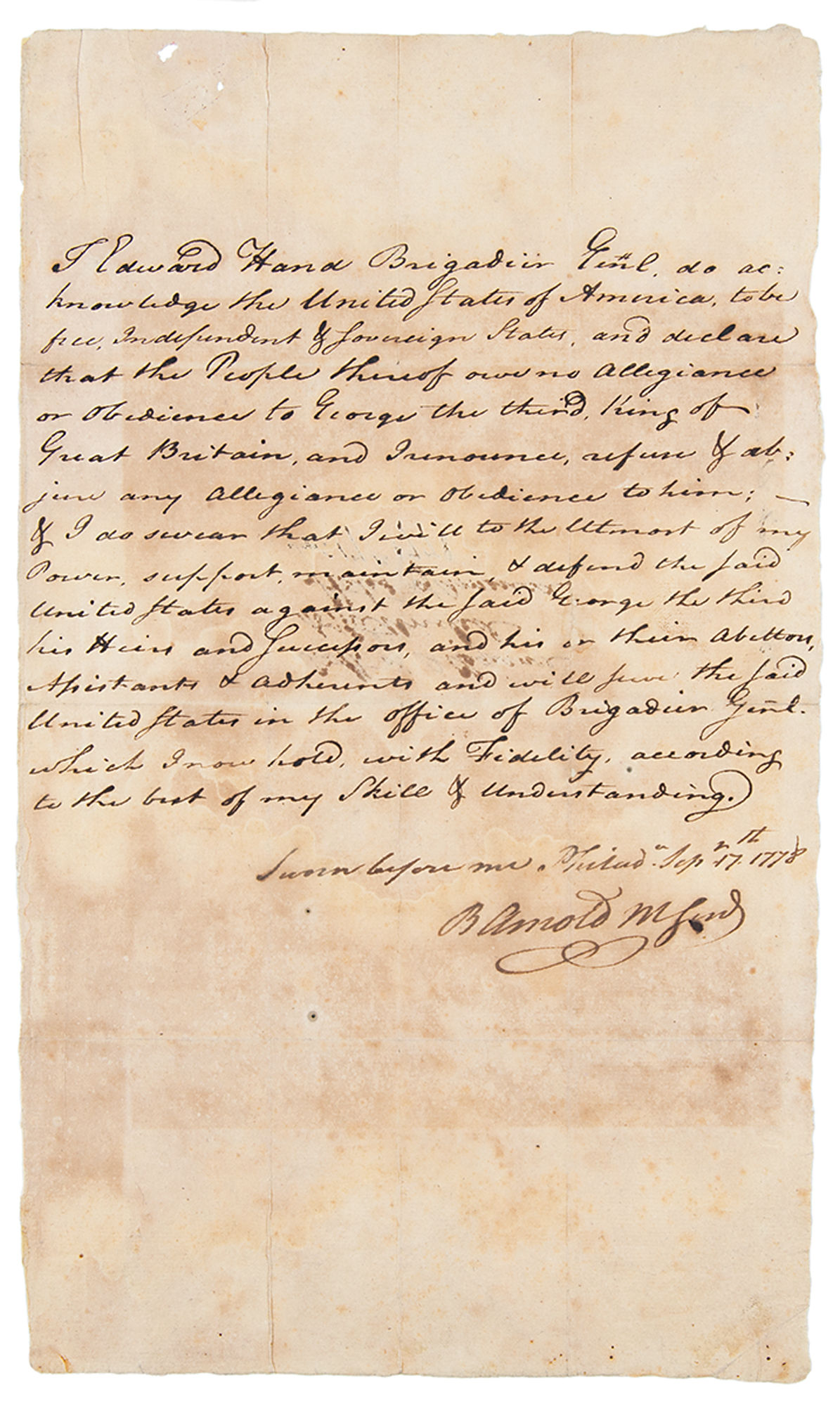 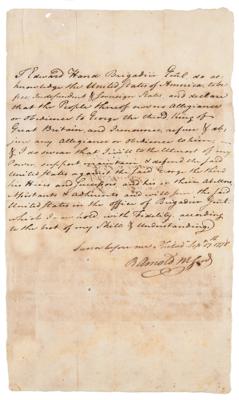 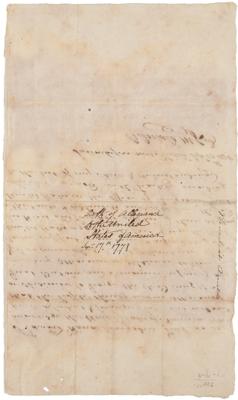 Revolutionary traitor Benedict Arnold writes out and certifies an oath of allegiance for a fellow officer: "I will to the Utmost of my Power, support, maintain & defend the said United States against the said George the third"

Revolutionary War-dated ADS, signed “B. Arnold, M. Genl.,” one page, 7.25 x 12.25, September 17, 1778. As senior officer in command at Philadelphia, Arnold writes and certifies an oath of allegiance for his fellow officer, Brig. Gen. Edward Hand, an Irish-born Pennsylvanian physician remembered for his service during the siege of Yorktown, and who would be appointed adjutant general to Gen. George Washington in 1781. In full: "I Edward Hand Brigadier Genl. do acknowledge the United States, to be free, Independent & Sovereign States, and declare that the People thereof owe no Allegiance or Obedience to George the third, King of Great Britain, and I renounce, refuse & abjure any Allegiance or Obedience to him;—& I do swear that I will to the Utmost of my Power, support, maintain & defend the said United States against the said George the third, his Heirs and Successors, and his or their Abettors, Assistants & Adherents and will serve the said United States in the Office of Brigadier Genl. which I now hold, with Fidelity, according to the best of my Skill & Understanding." At the bottom, Arnold, commanding the American garrison at Philadelphia, certifies his handwritten document: "Sworn before me, Philad'a, Sep'r 17th 1778, B. Arnold, M. Genl." In very good to fine condition, with two tiny areas of paper loss to the upper left corner, and irregular toning and staining affecting only appearance.

On February 3, 1778, the Continental Congress resolved that all civil and military officers should affirm an oath 'of allegiance and abjuration,' worded as in the present example. Arnold had sworn his own oath of allegiance on May 30, 1778, using a partly-printed form with the same text; as evinced by this document, handwritten manuscripts were substituted in cases where the form was not available. When the British withdrew from Philadelphia in June 1778, George Washington appointed Arnold as military commander of the city. While in Philadelphia, he met and married Peggy Shippen, a socialite from a Loyalist family, who would serve as a go-between in his correspondence with British intelligence officer John André. In September 1780, Arnold's plot to surrender the key Continental Army outpost at West Point was exposed and he fled to New York, where he received a commission as a brigadier general in the British Army. A remarkable handwritten oath of allegiance from the pen of America's most infamous traitor.

Past sales history: Christie's, Printed Books and Manuscripts, May 29, 1998.