Poe solicits a donation for the Southern Literary Messenger, his shortlived employer and his formal entrance into the publishing realm 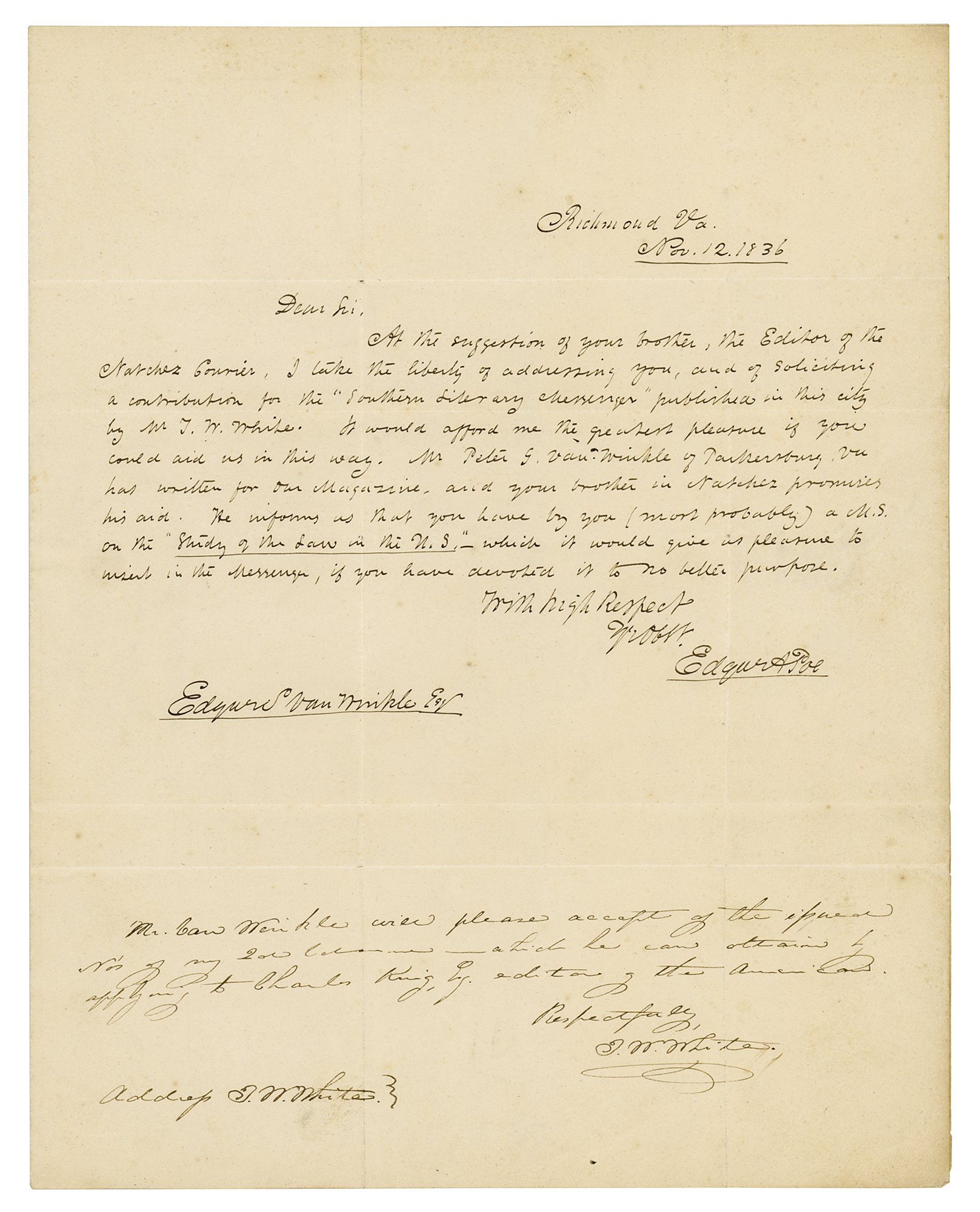 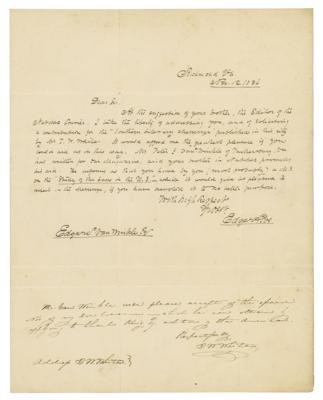 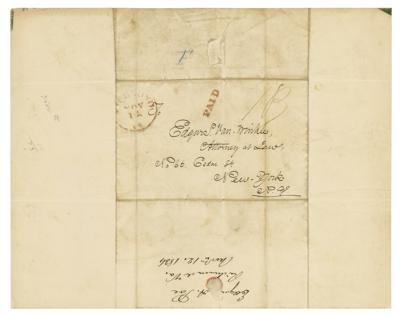 Previous Lot
Next Lot
Login or Register To Bid Add to BidTracker
Estimate: $125000+

Poe solicits a donation for the Southern Literary Messenger, his shortlived employer and his formal entrance into the publishing realm

Rare ALS signed “Edgar A. Poe,” one page, 8 x 10, November 12, 1836. As editor of the Southern Literary Messenger in Richmond, Virginia, Poe neatly pens a handwritten letter to lawyer Edgar Simeon Van Winkle, in full: “At the suggestion of your brother, the editor of The Natchez Courier, I take the liberty of addressing you, and of soliciting a contribution for the Southern Literary Messenger published in this city by Mr. T. W. White. It would afford me the greatest pleasure if you could aid us in this way. Mr Peter G. Van Winkle of Parkersburg, Va. has written for our Magazine, and your brother in Natchez promises his aid. He informs us that you have by you (most probably) a M.S. on the ‘Study of the Law in the U.S.’—which it would give us pleasure to insert in the Messenger, if you have devoted it to no better purpose.” Below Poe’s letter is a signed message from Thomas Willis White, publisher and founder of The Southern Literary Messenger, who writes: “Mr. Van Winkle will please accept of the issued No’s of my 2d Volume—which he can attain by applying to Charles King, Esq., editor of the American.”The central address panel on the reverse is annotated by Poe, with another hand docketing Poe’s name and address below. In fine condition. Accompanied by an export certificate from the French Ministry of Culture.

After marrying his young cousin Virginia in May of 1836, Poe returned to Richmond with his new bride and her mother (his aunt) to once again work as a staff writer and critic of the Southern Literary Messenger. His first stint with the magazine ended after a few weeks when White fired Poe for drinking on the job; however, with the promise of good behavior, Poe was welcomed back and, within a couple of months, was promoted to editor. Regularly publishing his own writing, including criticism, poetry, and short stories, Poe made himself a fixture in the literary world during his two-year tenure with the periodical, though he did not achieve measurable success until years later. Struggling to make a living as a writer, Poe hit additional financial stress when he suffered from an unknown illness in September of 1836, causing that month's issue of the Messenger to be delayed and his employment temporarily dissolved. He remained with the company until January 1837, when he was again released for his drinking habits. A beautifully penned letter from the 27-year-old scribe, written during a formative period in his life.