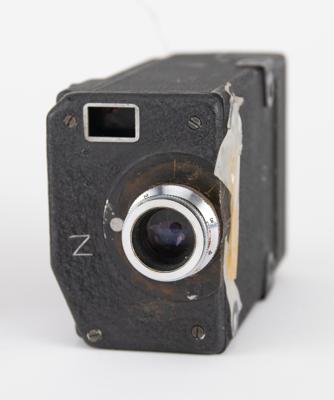 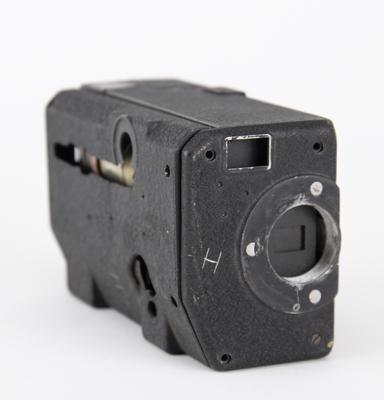 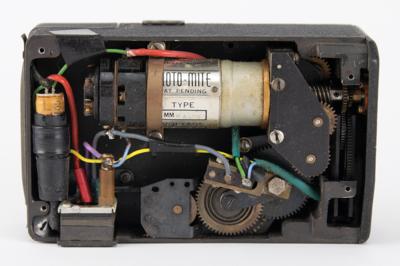 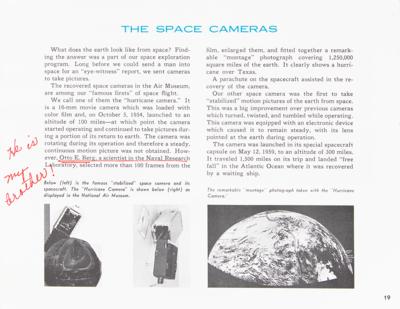 Two original 16mm motion picture cameras modified for use on Aerobee rockets from the collection of Otto Berg, described in his notes as flight spares of the camera he designed and flew aboard an Aerobee-hi rocket on October 5, 1954, which captured the imagery used for his famous photomosaic of Earth. These are evidently modified Bell & Howell Co. Model N6A gun sight aim point (GSAP) cameras, traditionally used by the US Navy for gunnery training. One unit, marked "N," retains its lens and has power wires exposed; the other camera, marked "H," is missing the lens and screws used for a housing plate, and has a port for power. In overall very good condition.

Berg discusses the camera's modifications in his notes: "The very unique design included in this camera is a triple co-rotating disc shutter which had to replace the normal shutter because the normal shutter in a gun camera would jam or even collapse under the 15 G acceleration of this rocket. Unfortunately, I never did apply for a patent on this unique shutter designed until it was too late—it is now often used in military/space operations. It took photos at 1/1200 second. The three discs rotate at three different speeds and each has a pie shaped opening so only when then the three pie shaped openings are in register does the film get exposure. I was the sole experimenter on this experiment, because I was in charge of determining the attitude of the rocket after it rose above eye-ball view. I used cameras equipped with infra red film to record the positions of the Sun and the horizon except in this case I proposed to use color film."

Accompanied by a booklet entitled "Masters of Space," published by the Smithsonian Institution, discussing Berg's work with space cameras. The 16mm movie camera was loaded with color film and shot into space aboard a US Navy Aerobee-Hi sounding rocket from White Sands, New Mexico, on October 5, 1954. At about 100 miles high, the rocket's cameras captured the first natural-color images of the Earth successfully taken from a high-altitude rocket. Using this imagery, Otto Berg, then a scientist with the Naval Research Laboratory, selected more than 100 frames from the film, enlarged them, and fitted together a remarkable 'montage' photograph. The resulting photomosaic, which clearly shows a hurricane over the state of Texas, became a popular and enduring image of this early era of space exploration.


From the collection of Dr. Otto Berg.