From the collection of LMP Buzz Aldrin, a flown Apollo 11 Flight Plan timeline listing “some of the final checks and work we did before becoming the first humans to walk on another world” 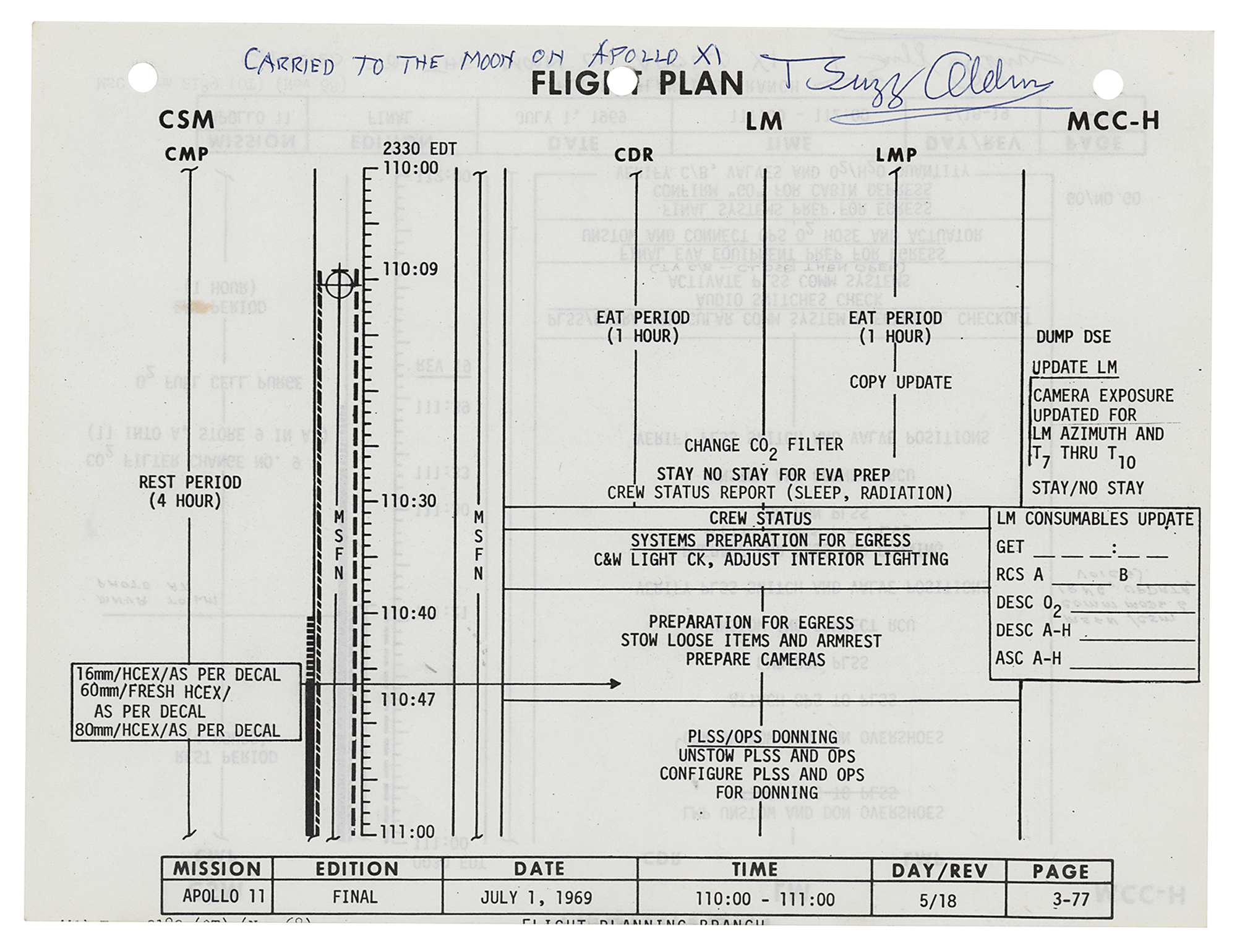 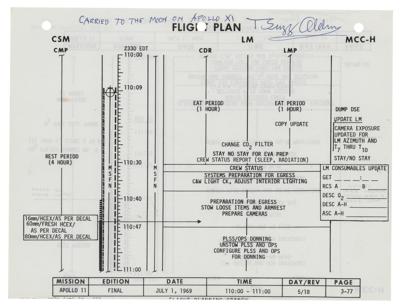 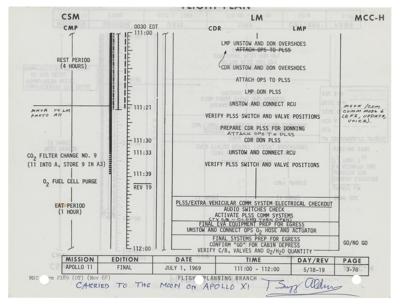 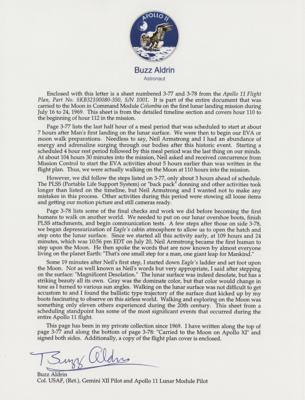 From the collection of LMP Buzz Aldrin, a flown Apollo 11 Flight Plan timeline listing “some of the final checks and work we did before becoming the first humans to walk on another world”

Tremendous flown 10.5 x 8 double-sided page from the final Apollo 11 Flight Plan carried into lunar orbit aboard the Command Module 'Columbia' during the first lunar landing mission. Boldly signed with a clean and precisely written flight-certification inscription of "Carried to the moon aboard Apollo XI, Buzz Aldrin" on each side in blue ballpoint. The page’s front and back, numbered “3-77” and “3-78,” show the last half-hour of the crew’s scheduled meal period and the start of CDR Neil Armstrong and LMP Aldrin’s critical moonwalk preparations, such as “Stow Loose Items and Armrest,” “LMP Don PLSS,” and “CDR Unstow and Don Overshoes,” with the last section listed as “Final Systems Prep for Egress.” Notably, there are some hand-notated amendments to the plan, including “Attach OPS to PLSS” and “(TV C/B—Close then open)” under the "LM" column at 111:29 and 111:52, “MNVR to LM, Photo ATI” under the “CSM” column at 111:21, and “MSFN/CSM, Comm Mode 6 (RNG, Updata, Voice)” under the “MCC-H” column. This is only one of eleven sheets in the flight plan to detail the lunar surface activities for Apollo 11. In fine condition.

Accompanied by a detailed letter of provenance signed by Buzz Aldrin, in part: "Enclosed with this letter is a sheet numbered 3-77 and 3-78 from the Apollo 11 Flight Plan, Part No. SKB32100080-350, S/N 1001. It is part of the entire document that was carried to the Moon in Command Module Columbia on the first lunar landing mission during July 16 to 24, 1969. This sheet is from the detailed timeline section and covers hour 110 to the beginning of hour 112 in the mission.

Page 3-77 lists the last half hour of a meal period that was scheduled to start at about 7 hours after Man’s first landing on the lunar surface. We were then to begin our EVA or moon walk preparations. Needless to say, Neil and I had an abundance of energy surging through our bodies after this historic event. Starting a scheduled 4 hour rest period followed by this meal period was the last thing on our minds. At about 104 hours 30 minutes into the mission, Neil asked and received concurrence from Mission Control to start the EVA activities about 5 hours earlier than written in the flight plan. Thus, we were actually walking on the Moon at 110 hours into the mission.

However, we did follow the steps listed on 3-77, only about 3 hours ahead of schedule. The PLSS (Portable Life Support System) or ‘back pack’ donning and other activities too longer than listed on the timeline, but Neil Armstrong and I wanted not to make any mistakes in the process. Other activities during this period were stowing all loose items and getting our motion picture and still cameras ready.

Page 3-78 lists some of the final checks and work we did before becoming the first humans to walk on another world. We needed to put on our lunar overshoe boots, finish PLSS attachments, and begin communication tests. A few steps after those on side 3-78, we began depressurization of Eagle’s cabin atmosphere to allow us to open the hatch and step on the lunar surface…This sheet from a scheduling standpoint has some of the most significant events that occurred during the entire Apollo 11 flight.”