Rare first French edition of ‘Constitutions of the Thirteen United States of America,’ signed by Benjamin Franklin and published in the year of America’s independence 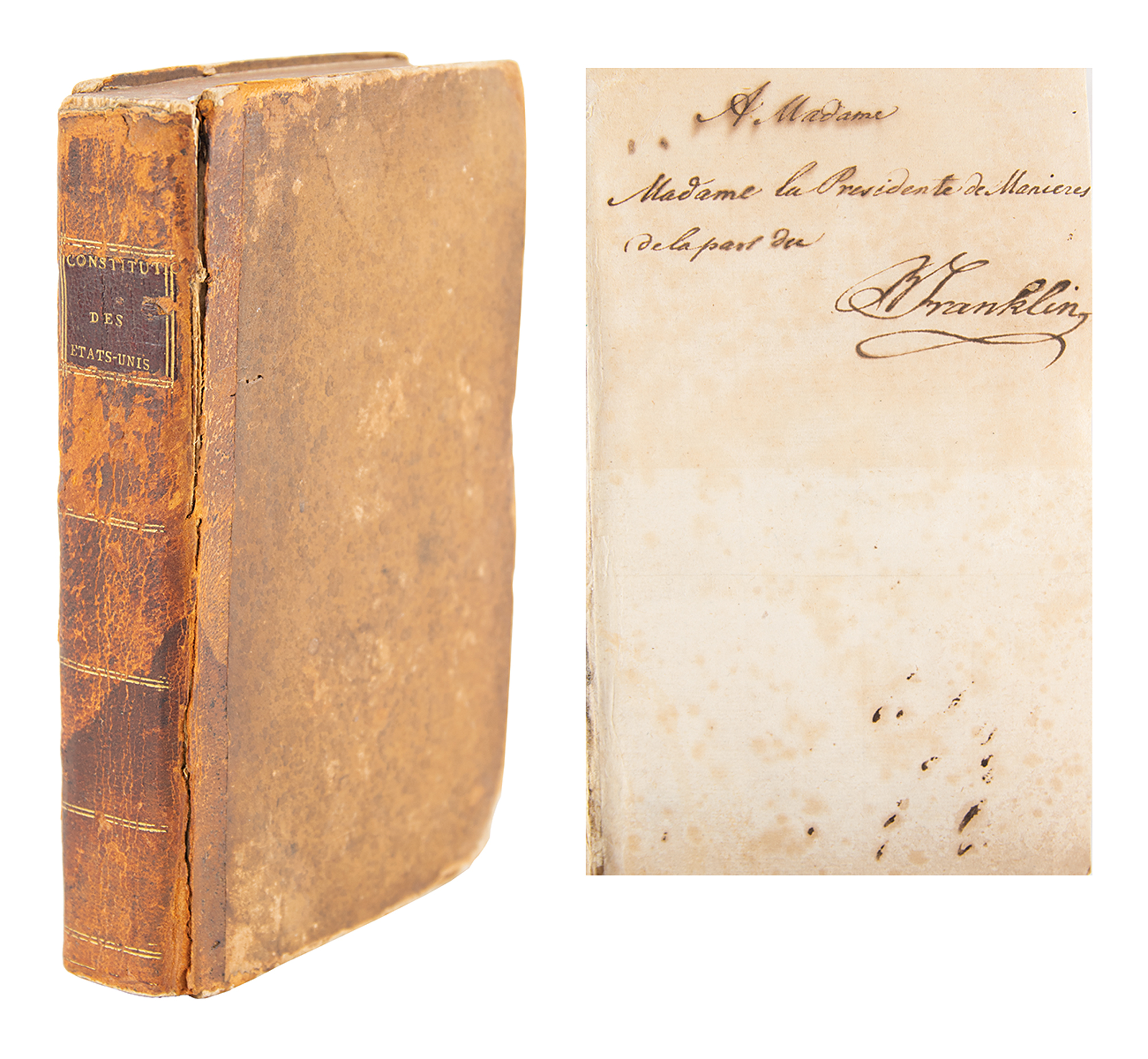 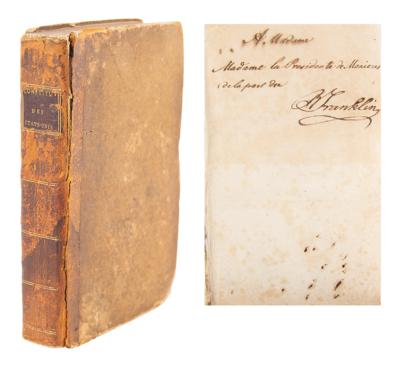 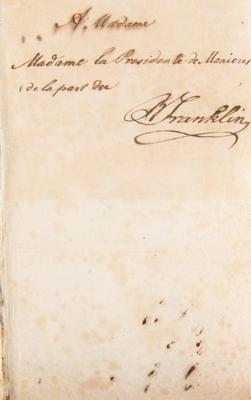 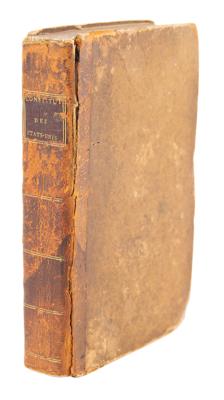 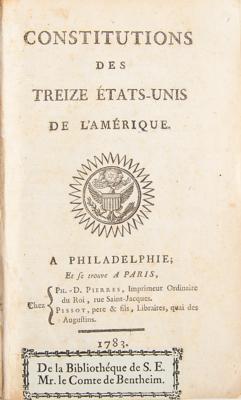 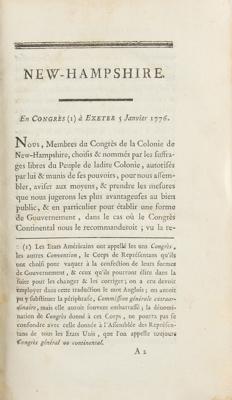 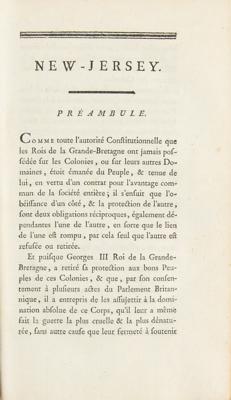 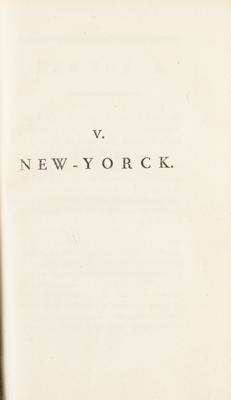 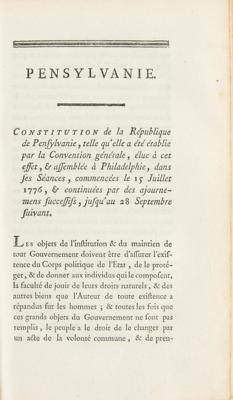 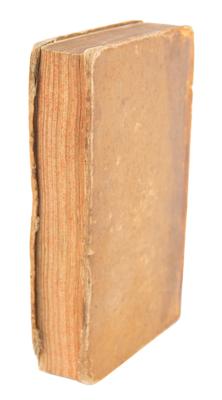 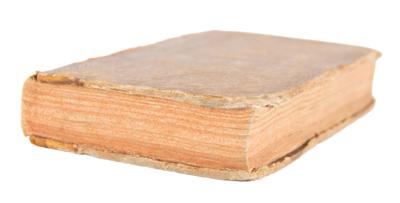 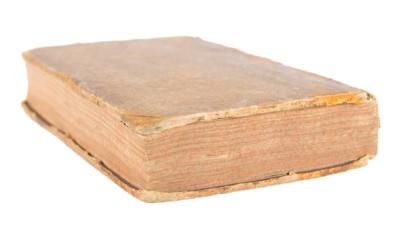 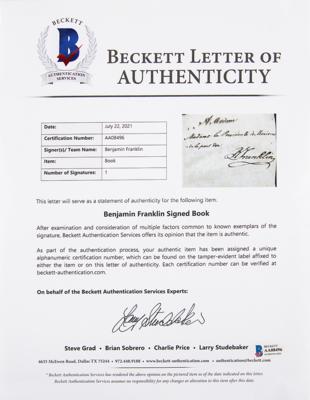 Rare first French edition of ‘Constitutions of the Thirteen United States of America,’ signed by Benjamin Franklin and published in the year of America’s independence

Extremely rare signed book: Constitutions des Treize Etats-Unis de l'Amérique [Constitutions of the Thirteen United States of America]. First French edition. Paris: D. Pierres / Pissot, Pere & Fils, Libraires, 1783. Hardcover bound in brown calf, spine with gilt upper label, 5 x 8, 540 pages. Signed and inscribed on the flyleaf in ink, "A Madame, Madame la Presidente de Manieres de la part du, B. Franklin." This signed page was previously sold as a loose flyleaf by Charles Hamilton in 1959, and it has since been professionally tipped into an edition of the book with which it was originally sent; this restorative procedure was expertly done and is hardly evident. Autographic condition: very good to fine, with staining and foxing to the signed page. Book condition: G+/None, with rubbing to boards, heavy wear to corners, and well-done professional repairs to joints. Accompanied by a letter of authenticity from Beckett Authentication Services.

On March 24th, 1783, Franklin wrote to the Comte de Vergennes: ‘I am desirous of printing a translation of the Constitutions of the United States of America, published at Philadelphia, by Order of Congress. Several of these Constitutions have already appeared in the English and American newspapers but there has never yet been a complete translation of them.’

At Benjamin Franklin’s suggestion, the French translation was made by the Duc de La Rochefoucault, and Franklin is believed to have contributed the fifty-plus footnotes. Franklin had 600 copies of Constitutions des Treize Etats-Unis de l'Amérique privately printed by Philippe-Denis Pierres, first printer ordinary of Louis XVI, which were not available for sale—Franklin distributed himself, and happily fulfilled the request of Madame Durey de Meinières, a French writer best known for her translations of Samuel Johnson, David Hume, and Sarah Fielding.

On August 31, 1783, Benjamin Franklin sent a copy of the newly published volume to Madame Durey de Meinières, along with a letter: 'I send with great Pleasure the Constitutions of America to my dear & much respected Neighbour, being happy to have any thing in my Power to give that she will do me the honour to accept, and that may be agreeable to her.'

The book contains the constitution of each of the thirteen States of America, the Declaration of Independence of the 4th of July 1776, the Friendship and Commerce Treaty, the Alliance Treaty between France and the United States, as well as the treaties between the United States and the Netherlands and Sweden. The title page boasts the the imprint of the United States seal, its first appearance in a book. Franklin’s grand gesture in publishing and distributing these constitutions—about which there was intense interest and curiosity among statesmen—was one of his chief achievements as a propagandist for the new American republic.

In a letter addressed to Thomas Mifflin, president of the American Congress, Franklin explains the reasons that pushed him to publish this book: ‘The extravagant Misrepresentations of our Political State in foreign Countries made it appear necessary to give them better Information, which I thought could not be more effectually and authentically done, than by publishing a Translation into French, now the most general Language in Europe, of the Book of Constitutions…This I got well done, and present two copies to every foreign minister here, one for himself, the other for his Sovereign. It has been well taken, and has afforded Matter of Surprise to many, who had conceived mean Ideas of the State of Civilization in America, and could not have expected so much political Knowledge and Sagacity had existed in our Wilderness. And from all Parts I have the satisfaction to hear, that our Constitutions in general are much admired.’