Handwritten from Paris during negotiations to end the Revolution, an incredibly rare letter from John Adams to John Hancock 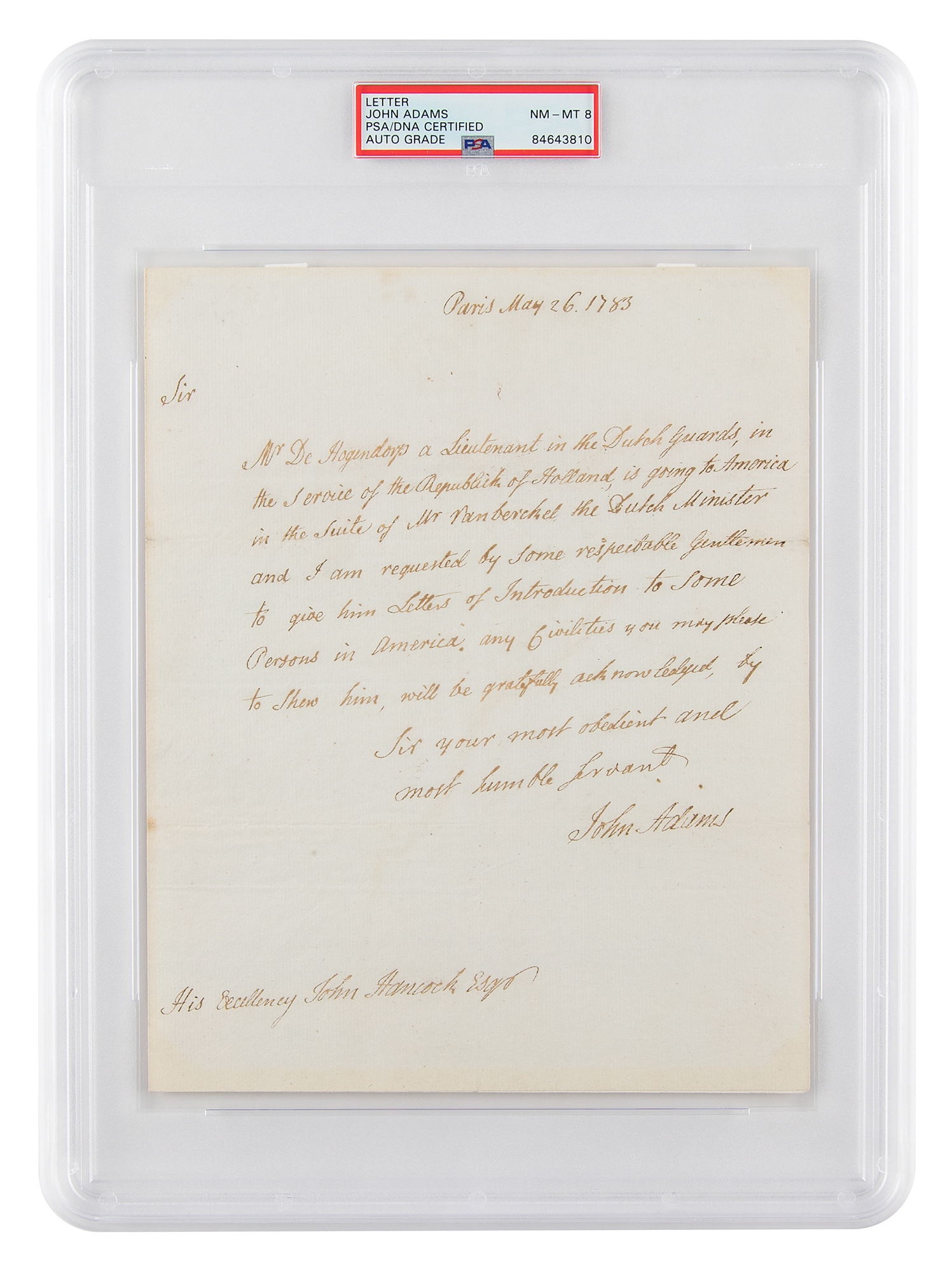 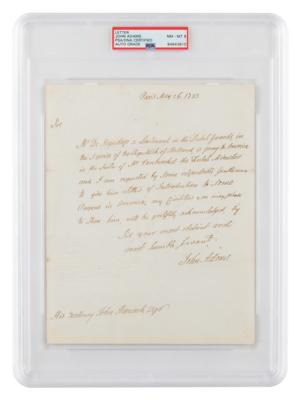 Handwritten from Paris during negotiations to end the Revolution, an incredibly rare letter from John Adams to John Hancock

Revolutionary War-dated ALS signed “John Adams,” one page, 7.25 x 9.25, May 26, 1783. Significant handwritten letter to "His Excellency John Hancock," sent from Paris while awaiting the final signing of the Treaty of Paris. In full: "Mr. De Hogendorp, a Lieutenant in the Dutch Guards, in the Service of the Republick of Holland, is going to America in the Suite of Mr. Vanberkel the Dutch Minister and I am requested by some respectable Gentlemen to give him Letters of Introduction to some persons in America. Any civilities you may please to show him will be gratefully acknowledged." In fine to very fine condition. Encapsulated and graded by PSA/DNA as "NM-MT 8."

John Adams traveled to the Dutch Republic and settled in Amsterdam in mid-1780, where he hoped to transform a pro-American sentiment into a substantial loan, thereby lessening American reliance on France. However, fearing reprisal from the British, the Dutch government refused to even meet with him for more than eight months. In spite of these political difficulties, Adams never relented. When news of America's triumph at Yorktown reached Europe, Adams petitioned at The Hague for official recognition of American independence, and continued to badger them for a loan. As a result of these efforts, on April 19, 1782, the Netherlands became the second nation in Europe, after France, to recognize the sovereignty of the United States. Adams was then able to negotiate a loan of five million guilders, a treaty of amity and commerce, and establish the first American embassy on foreign soil.

On March 4, 1783, Dutch politician Pieter Johan van Berckel was made the first minister plenipotentiary to the United States of America. In writing to congratulate him on the appointment, Adams offered some guidance: 'My Advice would be to land at Boston, & take the Journey to Philadelphia, while you send your Frigate round by Sea to that City—This will give you an Opportunity of seeing a great part of the United States, and of becoming acquainted with many principal Characters. I will be answerable for your cordial Reception every where. His Excellency the Governor of Massachusetts, Mr. Hancock, and his Honor the President of the Senate, Mr. Samuel Adams, will receive You at Boston—Governor Trumbull at Connecticut—General Washington and Governor Clinton at New York—Governor Livingston at New Jersey. I would by all means advise You to pass through New York and New Jersey, where You will find Multitudes charmed at the Sight of a Dutch Minister more than any other in the World.'

With this letter, he introduces Gijsbert Karel van Hogendorp, a member of van Berckel's delegation, to his old friend, Governor John Hancock. During his travels in America, van Hogendorp would befriend Thomas Jefferson and spend time in the company of the Washingtons at Mount Vernon. Van Hogendorp would return to the Netherlands and hold several offices as an influential liberal statesman.

At the same time he was connecting his Dutch friends to their American counterparts, Adams was hard at work negotiating the Treaty of Paris as part of a delegation that included Benjamin Franklin and John Jay. The treaty to officially end the Revolutionary War was drafted on November 30, 1782, and finally signed at the Hôtel d'York in Paris on September 3, 1783, by Adams, Franklin, Jay, and British negotiator David Hartley.