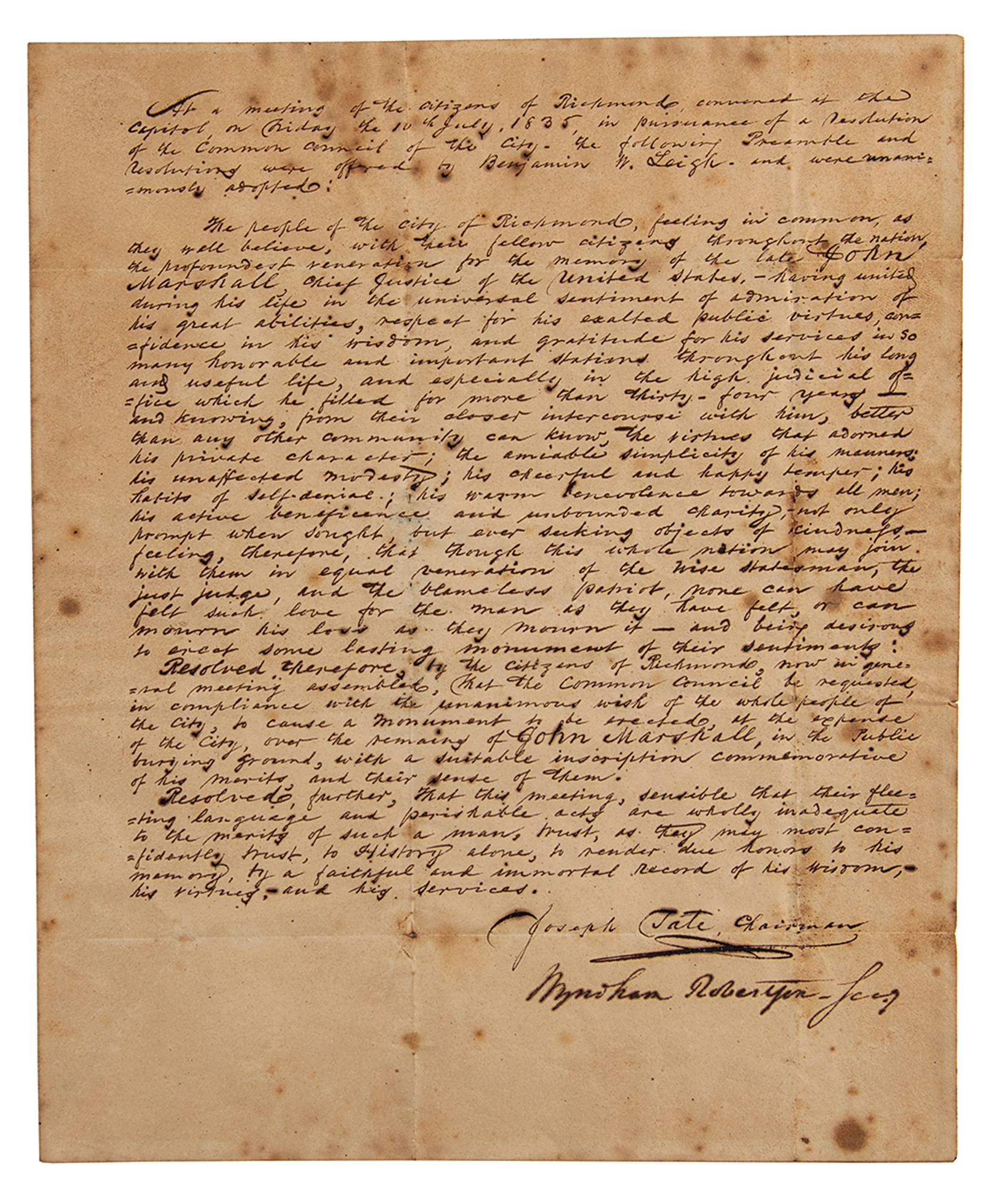 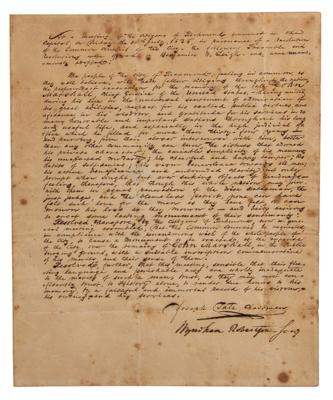 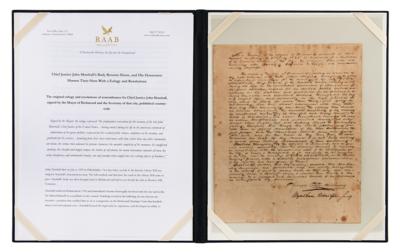 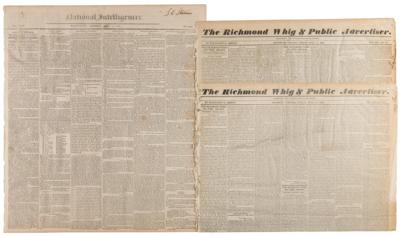 Original manuscript eulogy and resolutions of remembrance for Chief Justice John Marshall, signed by the Mayor of Richmond, "Joseph Tate, Chairman," and "Wyndham Robertson, Sec'y," one page, 7.25 x 8.75, July 10, 1835. The eulogy was published country-wide, and the manuscript descended within the Marshall family until 2018. The historic eulogy expresses "the profoundest veneration for the memory of the late John Marshall, Chief Justice of the United States—having united during his life in the universal sentiment of admiration of his great abilities, respected for his exalted public virtues, confidence in his wisdom, and gratitude for his services…knowing from their closer intercourse with him, better than any other community can know, the virtues that adorned his private character, the amiable simplicity of his manners, his unaffected modesty, his cheerful and happy temper, his habits of self-denial, his warm benevolence towards all men, his active beneficence and unbounded charity, not only prompt when sought but ever seeking objects of kindness." In very good to fine condition, with toning and some scattered staining. Accompanied by four original newspapers honoring Chief Justice Marshall on the occasion of his death, including: Niles' Weekly Register (July 18, 1835), National Intelligencer (July 11, 1835), The Richmond Whig & Public Advertiser (July 10, 1935), and The Richmond Whig & Public Advertiser (July 17, 1835).

John Marshall died on July 6, 1835, in Philadelphia. Two days later, on July 8, the historic Liberty Bell was rung for Marshall’s funeral procession. The bell cracked, and that's how the crack in the Liberty Bell came to pass. Marshall’s body was then brought back to Richmond and laid to rest beside his wife in Shockoe Hill Cemetery.

Marshall settled in Richmond in 1785 and immediately became thoroughly involved with the city and its life. He offered himself as a candidate to the city council. Finishing second in the balloting, he was chosen city recorder, a position that enabled him to sit as a magistrate on the Richmond Hustings Court that handled minor civil and criminal cases. Marshall learned the legal trade by experience and developed an ability to focus on and address the issues in clear language. He gained a reputation for adherence to a strict republican ideal of subordinating self- interest to the public good, controlling oneself by reason, and maintaining a sense of duty. He was appointed Chief Justice in 1801. Despite his elevated office, Richmond residents recalled Marshall carrying a basket to do the family marketing, and he was a frequent visitor to Richmond’s theaters and entertainments. Marshall was renowned among the gentlemen of the city as a genial and sociable man, and as a member of the Richmond Sociable Club and the Barbecue Club, where he was known for imbibing the punch laced with brandy, rum, and Madeira. He was named to the city commission to survey the James River, and in 1829-1830 joined James Monroe and James Madison as delegates to the Virginia constitutional convention.

His hometown was quick to eulogize Marshall. On July 9 the City Council ordered, at the request of the Mayor, Joseph Tate, that the citizens gather at the Capitol the next day at 5pm. At the July 10 event, the Mayor was chairman of the ceremony and Wyndham Robertson was Secretary. Virginia’s U.S. Senator, Benjamin W. Leigh, addressed the group, and after paying a tribute to Marshall offered a preamble and resolutions that were unanimously adopted.

This is the original eulogy and resolutions of Richmond to Marshall, signed by Mayor Tate and Secretary Robertson. It praises Marshall the public servant and Marshall the man, stresses his personal association with Richmond, and resolves to build a monument to him. The complete eulogy reads, in full:

“At a meeting of the citizens of Richmond convened in the Capitol on Friday the 10th of July 1835, in pursuance of a resolution of the Common Council of the city - the following preamble and resolutions were offered by Benjamin W. Leigh, and were unanimously adopted:

“The people of the City of Richmond, feeling in common, as they well believe with their fellow citizens throughout the nation, the profoundest veneration for the memory of the late John Marshall, Chief Justice of the United States - having united during his life in the universal sentiment of admiration of his great abilities, respected for his exalted public virtues, confidence in his wisdom, and gratitude for his services in so many honorable and important stations throughout his long and useful life, and especially in the high judicial office which he filled for more than thirty-four years - and knowing from their closer intercourse with him, better than any other community can know, the virtues that adorned his private character, the amiable simplicity of his manners, his unaffected modesty, his cheerful and happy temper, his habits of self-denial, his warm benevolence towards all men, his active beneficence and unbounded charity, not only prompt when sought but ever seeking objects of kindness. Feeling, therefore, that though this whole nation may join with them in equal veneration of this wise statesman, the just Judge, and the blameless patriot, none can have felt such love for the man as they have felt, or can mourn his loss as they mourn it, — and being desirous to erect some lasting monument of their sentiments —

“Resolved, therefore, by the citizens of Richmond, now in general meeting assembled. That the Common Council be requested, in compliance with the unanimous wish of the whole people of the city, to cause a monument to be erected, at the expense of the city, over the remains of John Marshall, in the public burying-ground, with a suitable inscription commemorative of his merits and their sense of them.

“Resolved, further. That this meeting, sensible that their fleeting language and perishable acts are wholly inadequate to the merits of such a man, trust, as they may most confidently trust, to history alone to render due honors to his memory, by a faithful and immortal record of his wisdom, his virtues and his services.”

Accompanied by original newspapers from across the nation honoring Chief Justice Marshall upon the occasion of his death: (i) Niles’ Weekly Register, Baltimore, July 18, 1835 - HONORS TO JUDGE MARSHALL with solemn remembrances in New York and Richmond, including the publication of the text of Mr. Leigh’s preamble and resolutions as detailed in the manuscript; (ii) National Intelligencer, Washington, D.C., July 11, 1835. Front page report announcing the death of the venerated and venerable Chief Justice of the United States, JOHN MARSHALL, with lengthy biography; front page reports of Funeral Honors to the late Chief Justice Marshall. Page 3 includes Honors to the Memory of the late John Marshall, with reports from Philadelphia, Baltimore (newspaper delivered to subscriber, John Cox Stevens, first commodore of the NY Yacht Club); (iii) The Richmond Whig & Public Advertiser, Richmond, Virginia, July 10, 1835, internal pages black borders with exceptionally detailed reports upon the Death of Chief Justice Marshall (with early report from the Pennsylvania Enquirer of July 7, 1835) and Funeral Honors to John Marshall, with the order of the funeral procession and detailed reports about memorial for Chief Justice Marshall (rough margins); (iv) The Richmond Whig & Public Advertiser, Richmond, Virginia, July 17, 1835, Front page “Tribute of Respect to the Late Chief Justice Marshall” of the Bar of Norfolk, Virginia; internal report of honors for Chief Justice Marshall in the Town of Alexandria, Virginia. Report that the new Chief Justice will be Justice Roger Taney (rough margins).