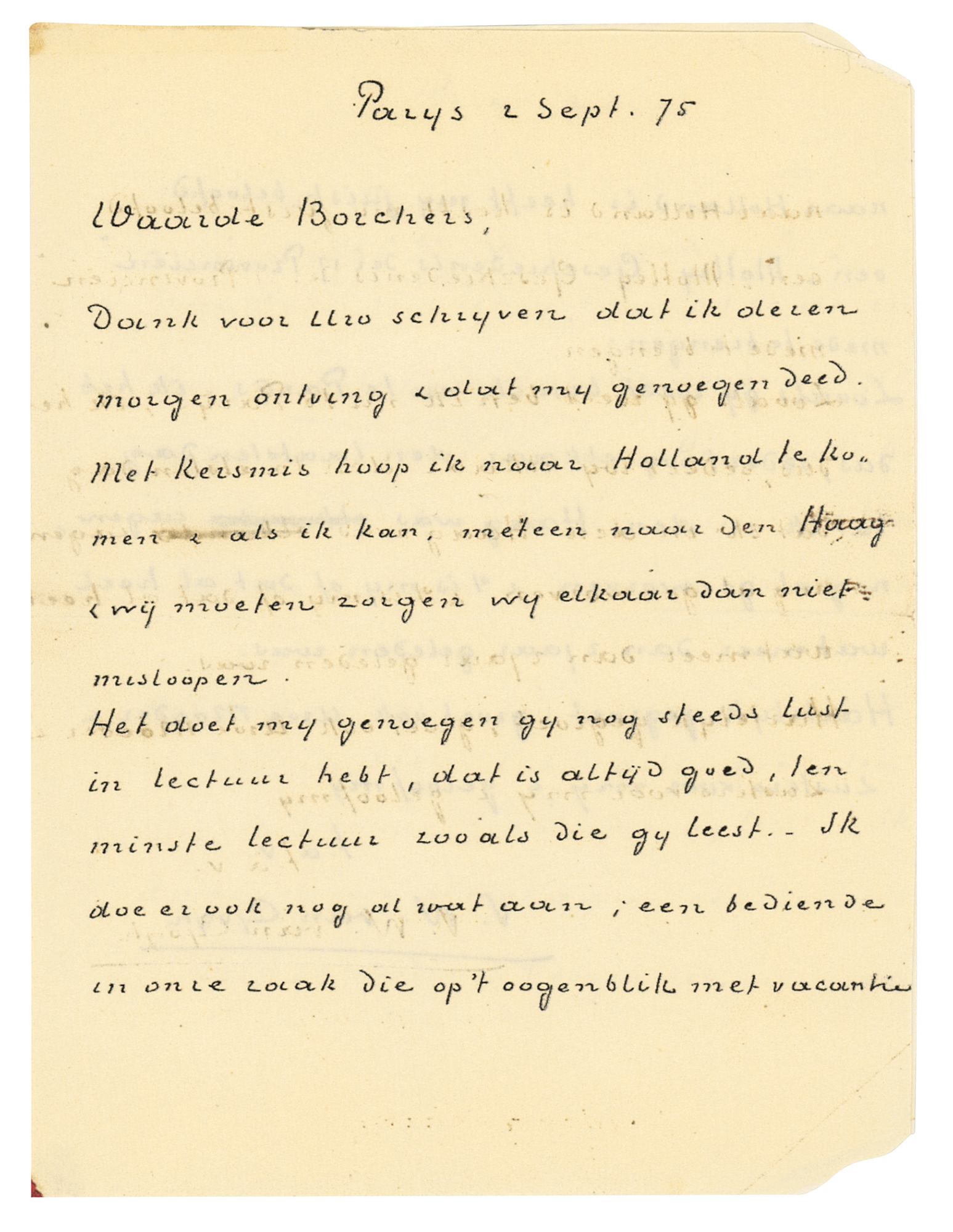 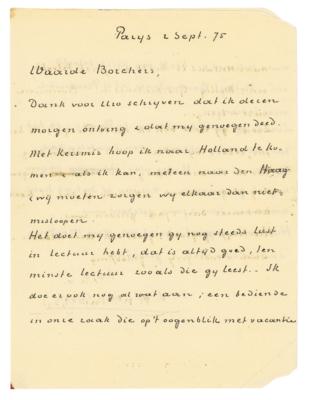 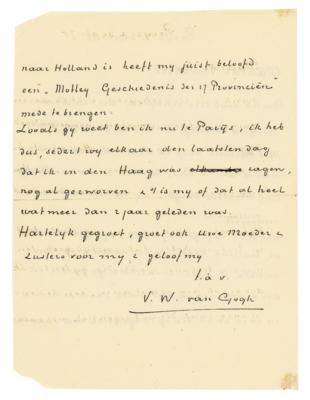 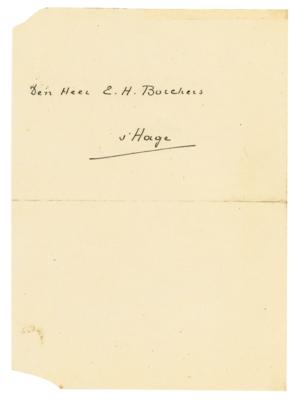 Rare ALS in Dutch, signed “V. W. van Gogh,” one page both sides, 4 x 5.25, September 2, 1875. Handwritten letter to Egbert Borchers, his friend in The Hague. In part (translated): "Thank you for your letter which I received this morning & which pleased me. At Christmas I hope to come to Holland & if I can, straight to The Hague & we must make sure we don't miss each other. I'm glad you still enjoy reading, that's always good, at least reading such books as you read. I'm keeping it up, too; an employee in our business who is currently on vacation to Holland has just promised me to bring me a copy of 'Motley, History of the 17 Provinces.' As you know, I'm in Paris now, so I've been wandering quite a bit since we saw each other on my last day in The Hague & it's as if that was quite a bit more than two years ago." Addressed on the reverse in van Gogh's hand. In fine condition, with minor clipping to two corner tips, affecting nothing. A rare and unusual variation of van Gogh's signature, as most of his letters are signed with just his first name.

Van Gogh worked for the art dealers Goupil & Cie in The Hague from July 1869 to May 1873, when he was transferred to London after completing his apprenticeship. Goupil was one of Europe's most renowned fine art dealers, and also a publisher of prints and engravings. At the young age of twenty, Vincent was earning a fine living with a salary higher than his father's. During this period, he learned a great deal about the art market, the old masters, and contemporary art. When his younger brother Theo took a position with Goupil, Vincent excitedly wrote to him: 'I am very happy that you work in the same firm. It is such a splendid house; the more one works there, the more ambition it gives you.'

At the time he wrote this letter, Vincent had been transferred to Goupil's Paris branch. There, he became increasingly religiously fervent and grew resentful of issues such as the degree to which the firm commodified art. His increasingly poor performance resulted in his dismissal in January 1876, just four months after the present letter. Stricken by poverty in the ensuing years, van Gogh finally picked up a paintbrush in 1880, some five years after he penned this epistle.

A primary topic in this letter is van Gogh's love of literature—an insatiable reader, he counted Dickens, Zola, Shakespeare, and Maupassant among his favorite authors. He often commented on his reading in letters to his brother Theo, providing insight into his bookish diversions. Vincent's favorite books guided his thoughts, defined his worldview, and influenced his art. A recent study of his reading, Vincent's Books: Van Gogh and the Writers Who Inspired Him by Mariella Guzzoni, was published in 2020.