Amid his own troubles, Poe extends his condolences to a fellow writer: "For sorrows such as this there is no consolation but in unrestrained grief" 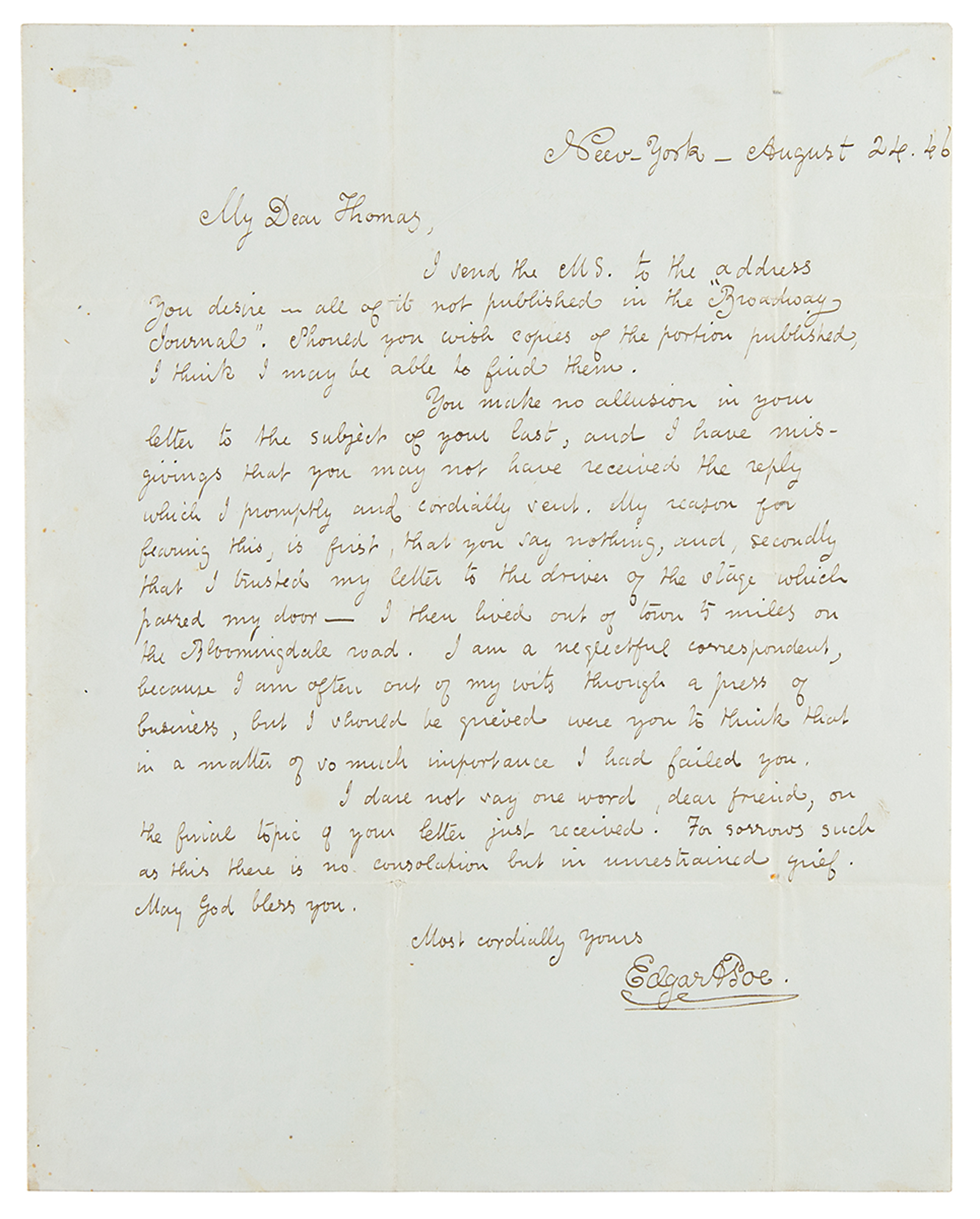 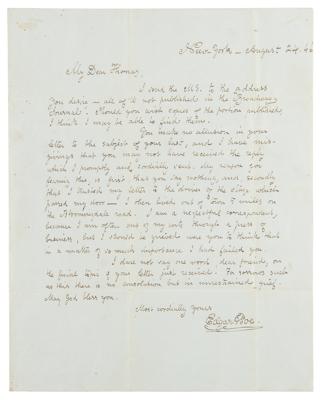 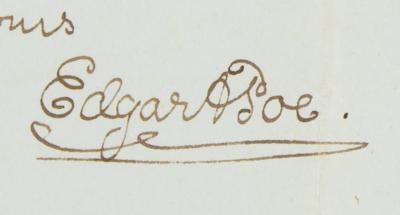 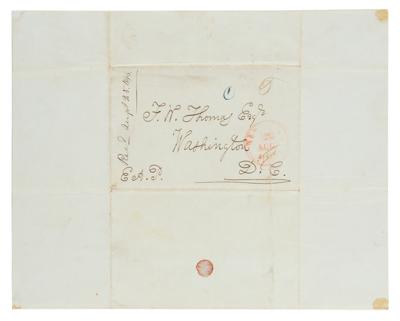 Amid his own troubles, Poe extends his condolences to a fellow writer: "For sorrows such as this there is no consolation but in unrestrained grief"

Rare ALS signed “Edgar A. Poe,” one page, 7.75 x 9.75, August 24, 1846. Addressed from New York, a handwritten letter to writer Frederick William Thomas, who, from 1841 until 1850, worked as a clerk in the United States Department of the Treasury in Washington, D.C., for which he selected a library. The letter, in full: “I send the MS. to the address you desire—all of it not published in the ‘Broadway Journal.’ Should you wish copies of the portion published, I think I may be able to find them. You make no allusion in your letter to the subject of your last, and I have misgivings that you may not have received the reply which I promptly and cordially sent. My reason for fearing this is first, that you say nothing, and, secondly that I trusted my letter to the driver of the stage which passed my door—I then lived out of town 5 miles on the Bloomingdale road. I am a neglectful correspondent, because I am often out of my wits through a press of business, but I should be grieved were you to think that in a matter of so much importance I had failed you. I dare not say one word, dear friend, on the final topic of your letter just received. For sorrows such as this there is no consolation but in unrestrained grief. May God bless you.” The “final topic” to which Poe refers is the tragic death of Thomas’s sister and her two children, who were all killed in an accident on their return home from India. In his letter, Thomas deemed the event ‘the most awful affliction of my life.’ The reverse of the second integral page is hand-addressed by Poe, who adds his initials to the lower left, "E. A. P." In fine condition. Accompanied by an export certificate from the French Ministry of Culture.

Poe's own life is in a sorrowful state as he writes this. A failed effort to buy control of the dying Broadway Journal buried him even deeper in debt. Destitute, in poor health, isolated in his Bronx cottage from the downtown literary scene, and with his wife Virginia slowly dying from tuberculosis, Poe was also a plaintiff in a libel suit that summer of 1846. Thomas Dunn English, whom Poe lampooned in The Literati of New York City, had retaliated in the New York Mirror, describing Poe as 'thoroughly unprincipled, base and depraved, silly, vain and ignorant, not alone an assassin in morals, but a quack in literature.' The $225 he won in damages in February 1847 was small consolation. Virginia died in January, and Poe then began his own long, miserable slide to the grave, a process punctuated by only brief periods of creativity and sobriety, and which ended in Baltimore in 1849.