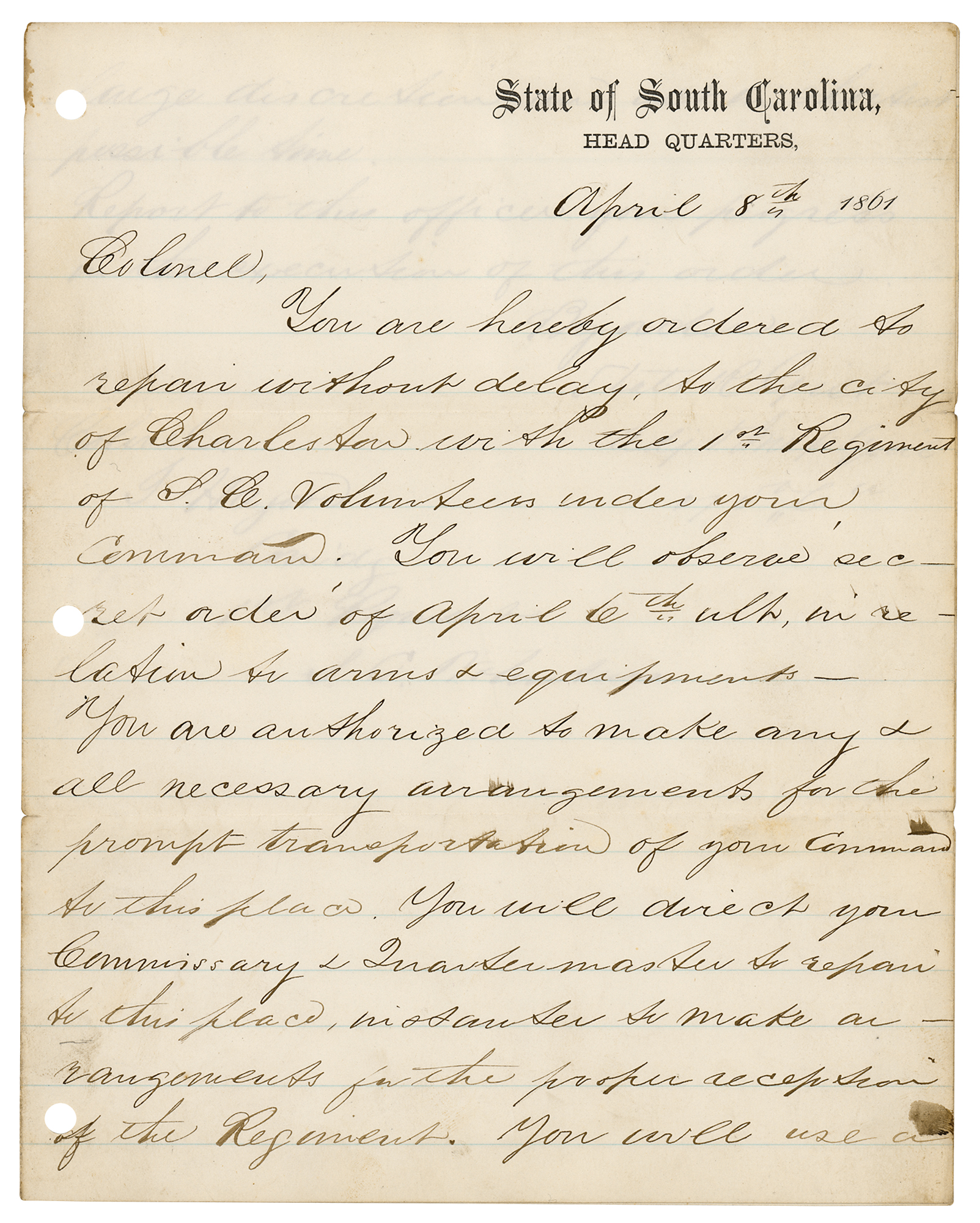 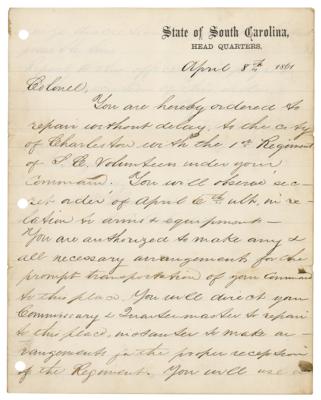 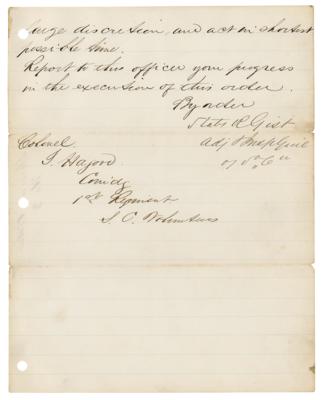 Confederate officer named for his family's ardent political views (1831-1864) who served under W.H.T. Walker at Vicksburg, Chickamauga, and Atlanta, and was killed in action after being shot at the Battle of Franklin. LS signed “States R. Gist, Adj. & Insp. Gen'l of So. Ca.,” two pages on two adjoining sheets, 7.75 x 9.75, State of South Carolina Head Quarters letterhead, April 8, 1861. Sent just four days before the attack on Fort Sumter, an order to Colonel Johnson Hagood, commander of the 1st Regiment of South Carolina Volunteers. In full: "You are hereby ordered to repair without delay to the city of Charleston with the 1st Regiment of S.C. Volunteers under your command. You will observe secret order of April 6th ult. in relation to arms & equipment—You are authorized to make any & all necessary arrangements for the prompt transportation of you command to this place. You will direct your Commissary & Quartermaster to repair to this place, to make arrangements for the proper reception of the Regiment. You will use a large discretion and act in shortest possible time. Report to the officer your progress in the execution of this order." In fine condition, with three file holes to the left edge.

This is an amazing manuscript from the start of the Civil War—the Confederacy, in its infancy, moves troops into place as their attack of Fort Sumter looms just days away. It is the first full name Gist signature we have encountered—he typically signed as "S. R. Gist"—and it appears on a most important document. In January 1861, after South Carolina had seceded from the Union on December 20, 1860, the new governor Francis Pickens appointed Gist as state adjutant and inspector general. In this capacity, Gist acquired weapons and mobilized military manpower throughout the state. He also briefly oversaw operations in preparation for the state’s occupation of the harbor of Charleston and the federal Fort Sumter.

The new Confederate government took over this operation in February 1861 and appointed General P. G. T. Beauregard to command it. Gist accompanied Pickens and Beauregard for the raising of state and Confederate flags over Fort Sumter after its surrender on April 14, 1861.

The recipient, Colonel Johnson Hagood, enlisted in the South Carolina troops as a thirty-two-year-old lawyer from Barnwell County. He was commissioned colonel of the 1st South Carolina Infantry, earned a promotion to Brigadier General in July 1862, and was present at the surrender of the Confederate Army at Appomattox Court House. In light of this significant association, this document represents both the beginning and end of the Civil War.