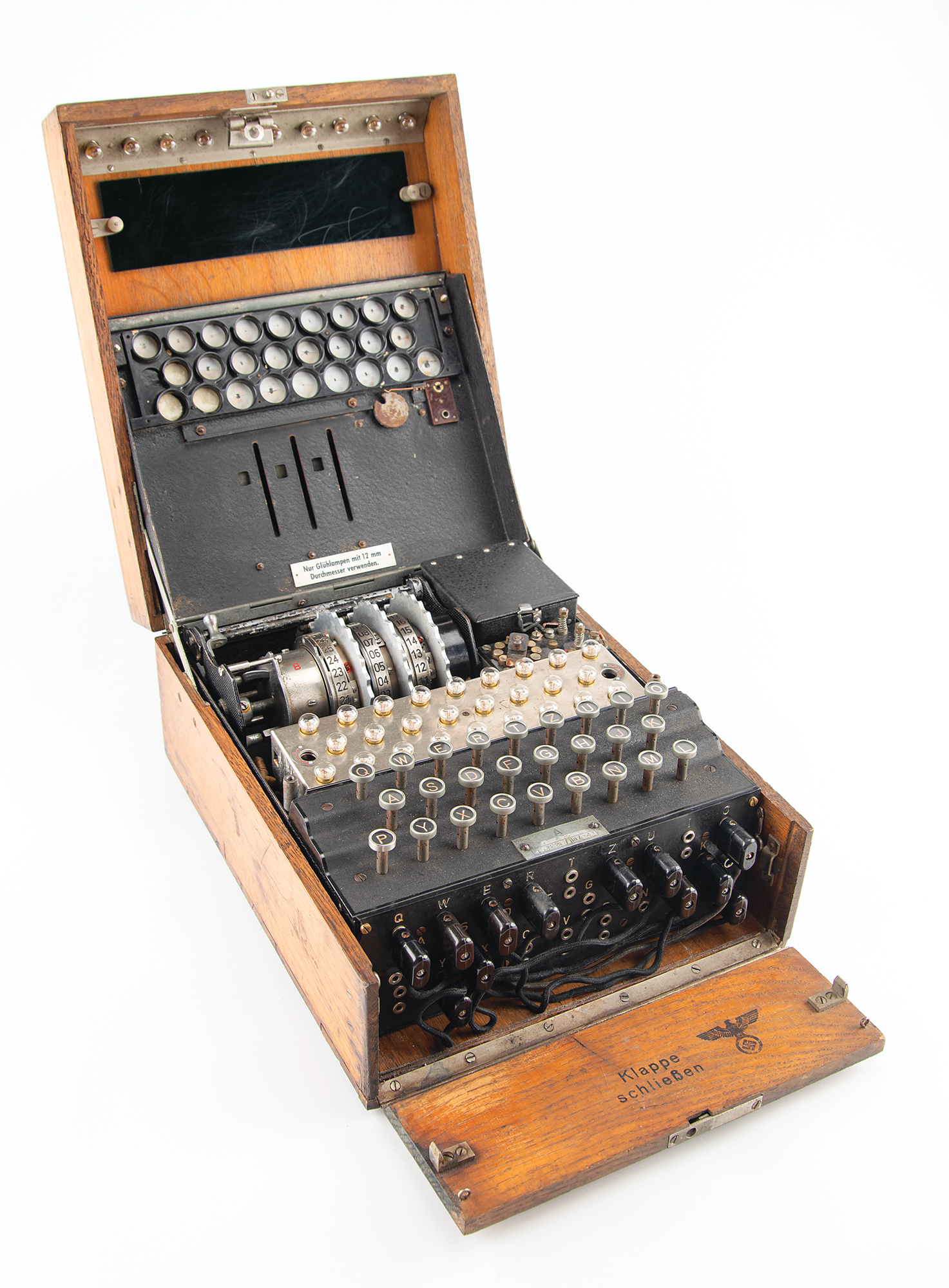 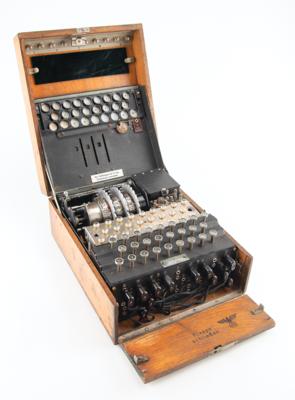 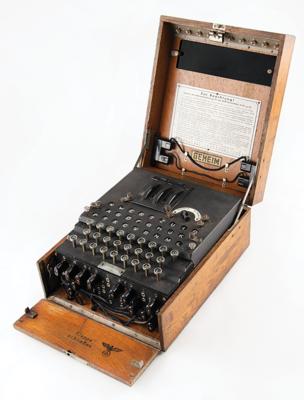 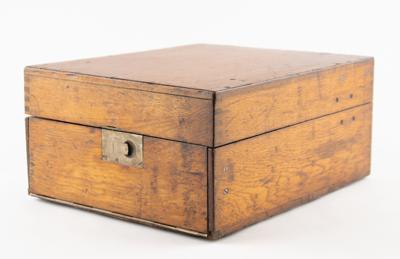 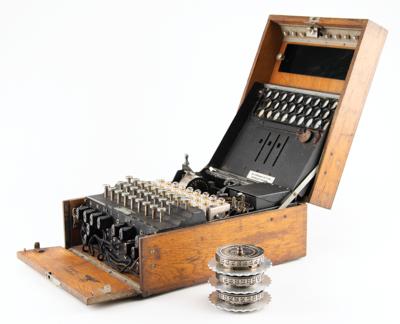 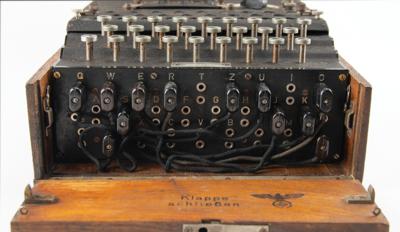 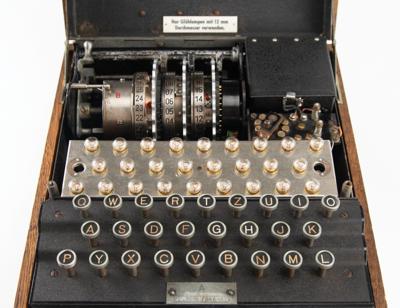 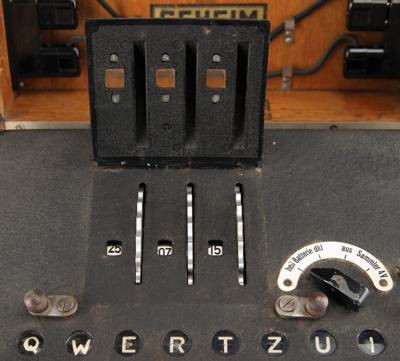 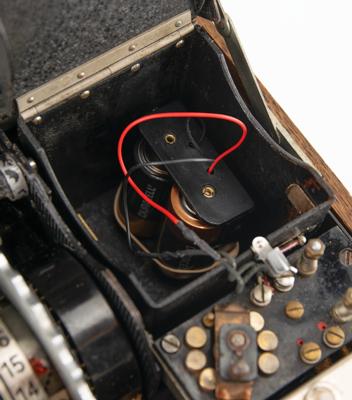 Previous Lot
Next Lot
Login or Register To Bid Add to BidTracker
Estimate: $200000+

Ultra-desirable, fully functional World War II-era three-rotor Enigma I electromechanical cipher machine built for the German military by Heimsoeth and Rinke in Berlin in 1943. Based on the chassis of the commercial Enigma D, the Enigma I machine was the standard Enigma machine used by the German military throughout the war. It features an ebonite Steckerbrett [plugboard] on the front, which was exclusive to the German armed forces and exponentially increased the complexity of the code. This version of the Enigma is sometimes referred to as the Heeres [Army] Enigma, Wehrmacht Enigma, or Luftwaffe Enigma due to its military-specific application.

The Enigma machine is housed in its original oak case with hinged lid and hinged front panel, with serial number plate "A15788/jla/43" on the keyboard. Stored inside the lid are two spare Stecker cables, nine spare light bulbs, a replica contrast screen, "Geheim [Secret!]" label, and original "Zur Beachtung" instructions for cleaning, use, and troubleshooting. The lid also retains its uncommon metal-clip message holder at the top. The inner front panel is stamped "Klappe Schliessen [Keep Closed]" and boasts a rare Reichsadler military eagle stamp, rarely seen on surviving Enigma cases. The case also retains its fragile brown leather carrying handle on the back. The finish on the oak box has been lightly restored to stabilize the wood and a few areas of wood delamination on the box have been expertly repaired. The machine and case are in excellent condition and show wear characteristic of use during the war.

The three included rotors—marked as "I," "II," and "III"—match each other with serial no. "A5094," indicating that they were manufactured in Berlin in 1938. Though the serial numbers of the Enigma machines and their rotors matched when issued, mismatches are typical of field-used machines. Rotors were often swapped out at German communication outposts as they were interchangeable and not dedicated to specific machines. Rotor I appears to be in original condition. Rotors II and III contain original Enigma rotor parts and appear to have been refurbished.

The present rotors demonstrate a progression in design, which evolved as resources became scarce over the course of the war. The earliest rotors featured an all-metal construction, while later examples had Bakelite thumbwheels and ratchet wheels. With aluminum thumbwheels and Bakelite ratchet wheels, these rotors represent an in-between step in this progression. Each rotor can display one of its 26 numerals through the three windows in the machine's cover. They have spring-loaded brass contacts on the sides corresponding to each of the 26 numbers, and they may be arranged in any order on the internal shaft. The specific settings of the rotors and plugboard were determined on a daily basis via a secret codebook that allowed the German forces to synchronize their Enigma machines.

The Enigma machine has a standard German "QWERTZ" keyboard with 26 white-on-black keys, with matching "QWERTZ" lighted display. When a key is pressed, the corresponding encoded letter—as determined by the specific arrangement of the rotor wheels and plugboard—is illuminated. The rightmost rotor steps once each time a key is pressed. At an adjustable point it triggers the middle rotor to step, and so on. Through this mechanism, an easily crackable simple substitution cipher is avoided—letters are not encoded the same way twice. An encoded message would be written down and transmitted, usually via radio telegraph (a standard World War II-era German Wehrmacht Baumuster T1 telegraph key is included with this machine). In order to decode a message, the Enigma machine on the receiving end would have to be set up with the plugboard and rotor wheels in the same pattern as the sending Enigma: when the encoded message was typed in, the decoded letters would light up, revealing the secret message one character at a time. Since no original batteries have survived, this machine has been modified to accept two modern C batteries. Also includes two reprints of the Enigma operator manuals.

First patented in 1918 by Arthur Scherbius, the Enigma machine was developed for use in the transmission of confidential information: in addition to its obvious military and diplomatic applications, the machine found commercial use for the encryption of sensitive financial data. The German military adopted the Enigma as its primary cipher in 1926, after learning that the British had intercepted and interpreted coded German naval messages during World War I. Amidst the subsequent buildup of German forces, Poland felt particularly vulnerable—having been ceded disputed border territories by the Treaty of Versailles—and sought to crack the Enigma. Genius Polish codebreakers—led by Marian Rejewski, Jerzy Rozycki, and Henryk Zygalski—developed techniques for the decryption of Enigma code, and turned over their research to Allied counterparts after Germany's 1939 invasion of Poland. Alan Turing and the other brilliant code breakers at Bletchley Park continued their important work, speeding up the time it took to decode Enigma messages. The codebreaking efforts at Bletchley Park led to the development of the world's first computers as technology was pushed to defeat German cipher machines. Historians agree that these decoded messages shortened World War II by about two years, perhaps denying Nazi Germany the time needed to develop nuclear weapons. As a functional, war-dated example of the German military's Enigma machine, this piece is truly a marvel of technological and WWII history.

Condition and provenance: the consignor notes that this was purchased from a German collector in the early 2000s, who had acquired it in the 1970s from a dealer known to trade in Enigma machines that were used by West Germany in the decades after WWII. During the Cold War, the British encouraged a few countries, including West Germany, Norway, Austria, and Israel, to use Enigma machines for sending secret messages—without disclosing that the code had been cracked. The last of the few in-service post-war Enigma machines were either destroyed or sold in the 1970s after the public release of information detailing the Allied codebreaking successes against Enigma codes during WWII.

During the process of restoring this Enigma machine to working condition, the interior of the machine was accessed to allow for the cleaning of all electrical contacts and the inspection of all moving parts. During this process it was discovered that the machine had either been dropped or intentionally damaged at some point over the last 70 years. Professional restorations were also made to damaged mounting plates and metal under the battery box. Any missing or non-functional light bulbs have been replaced with exact replica light bulbs to restore full functionality of the machine. Full operation of the machine was restored.