"The Faulty Bagnose"—a playful handwritten poem by John Lennon, published in 1965's A Spaniard in the Works 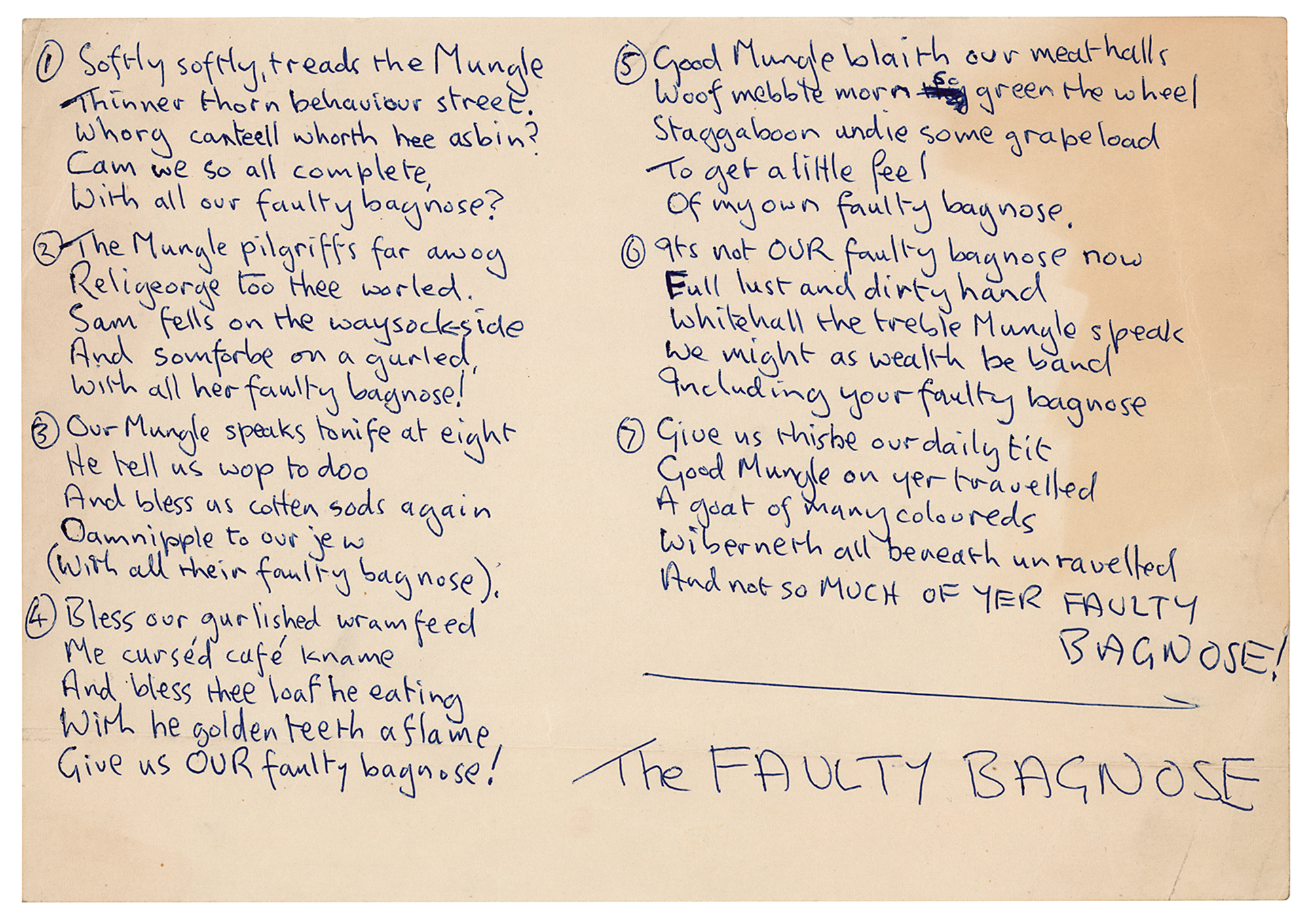 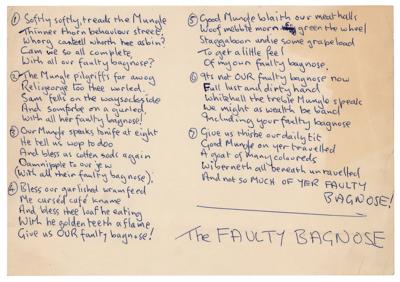 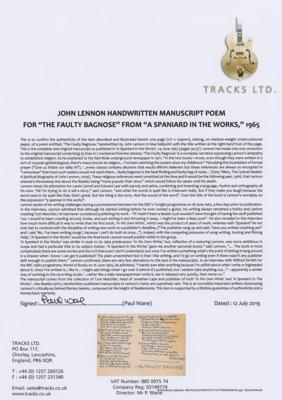 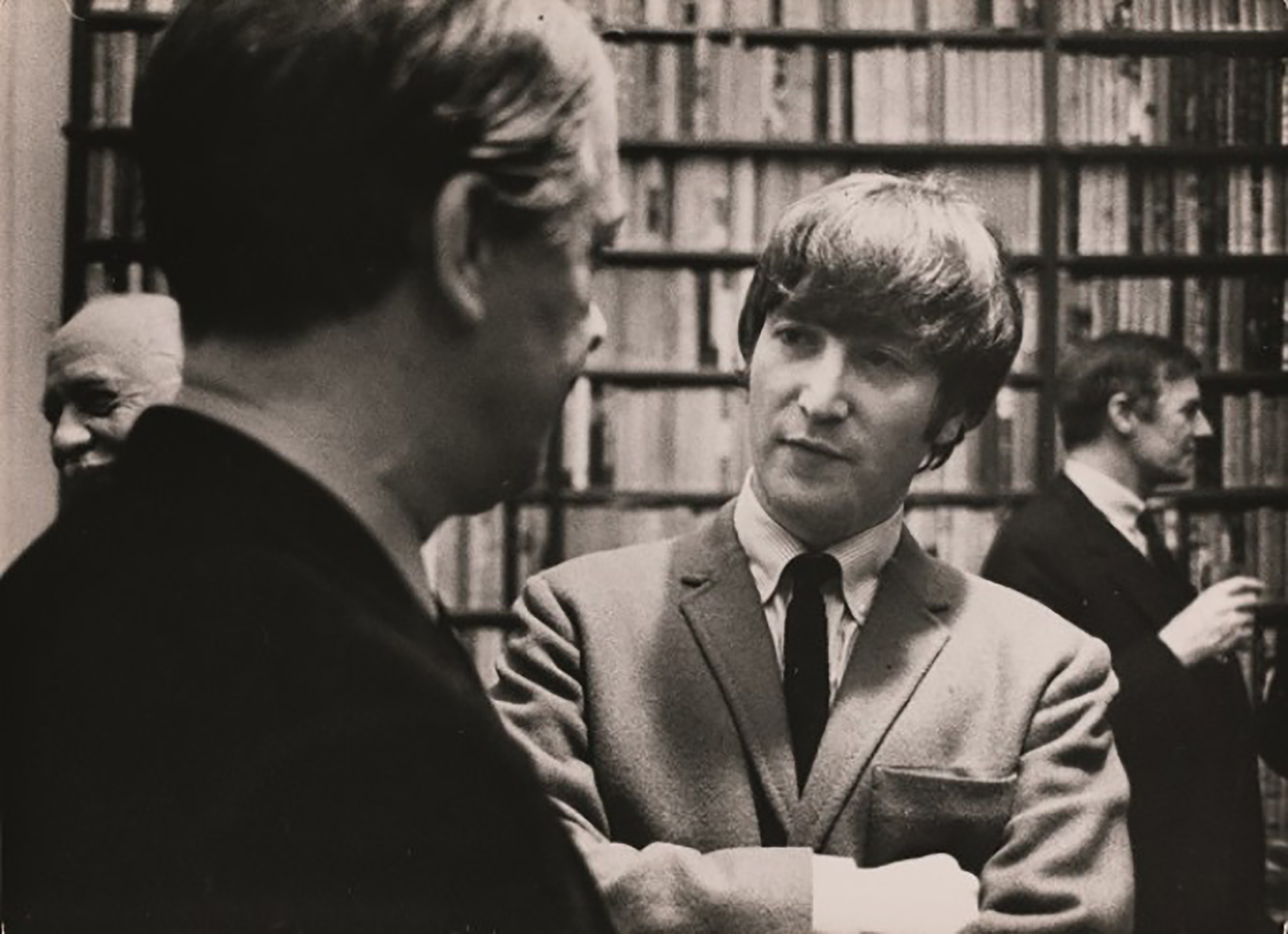 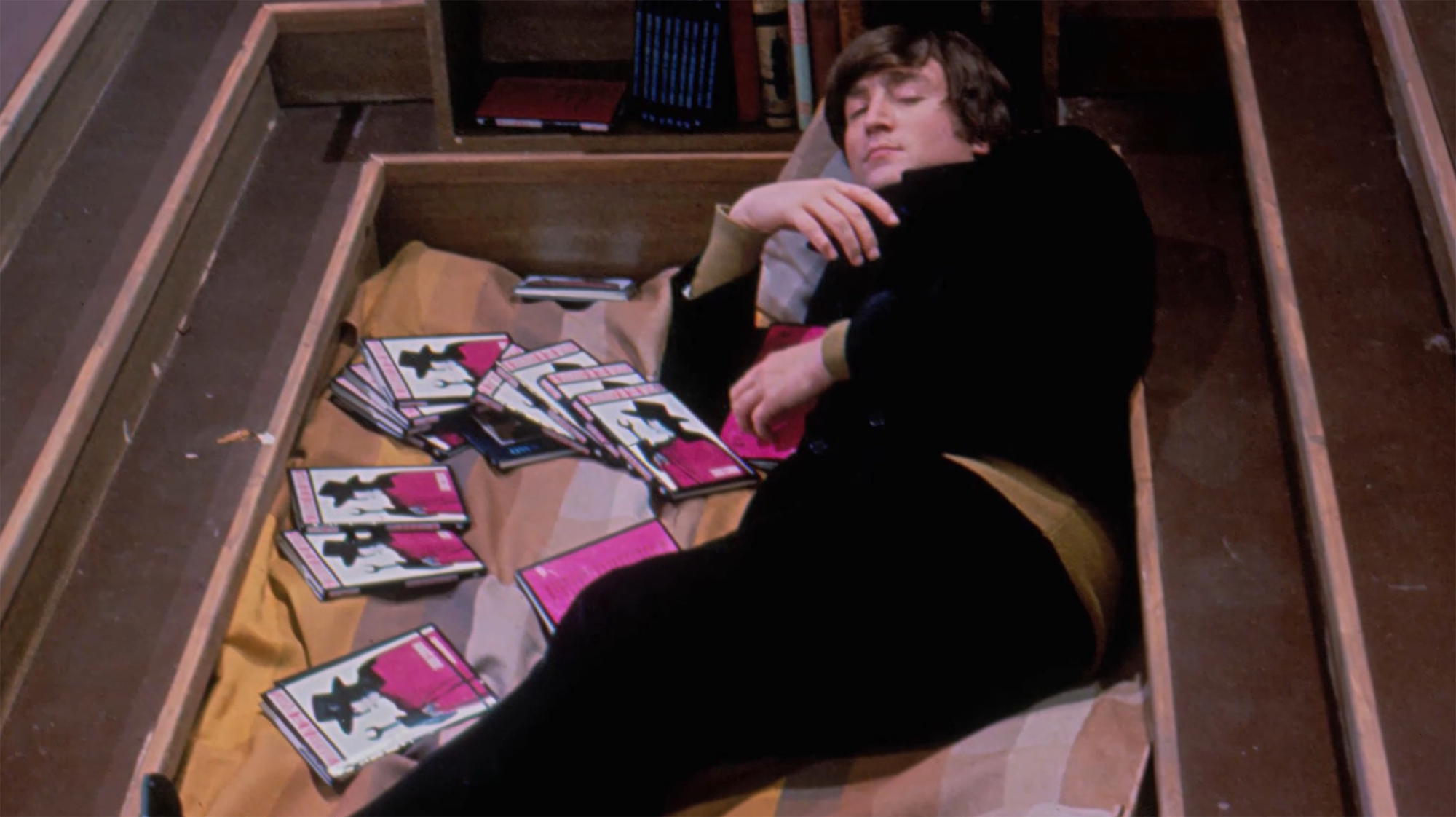 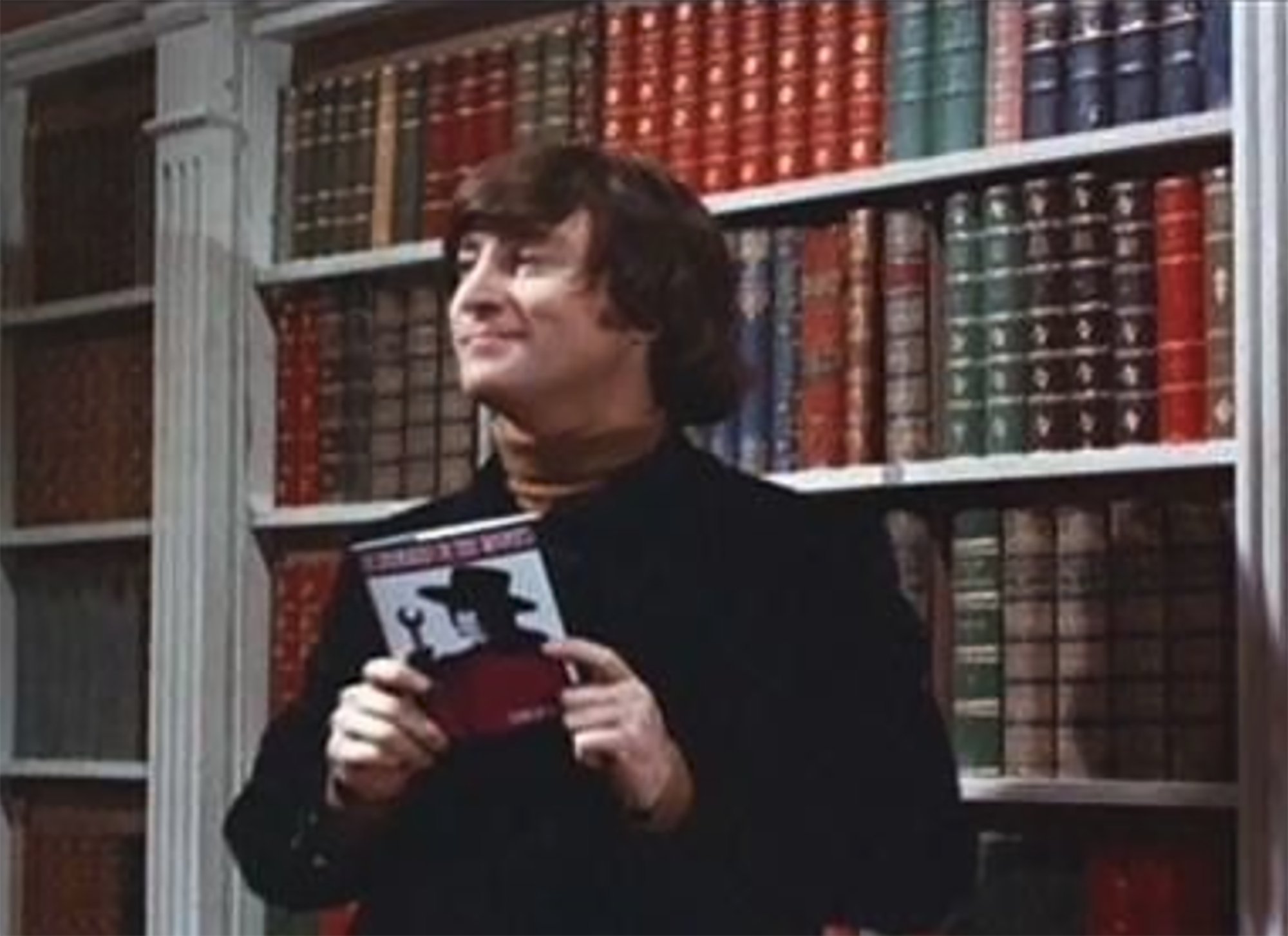 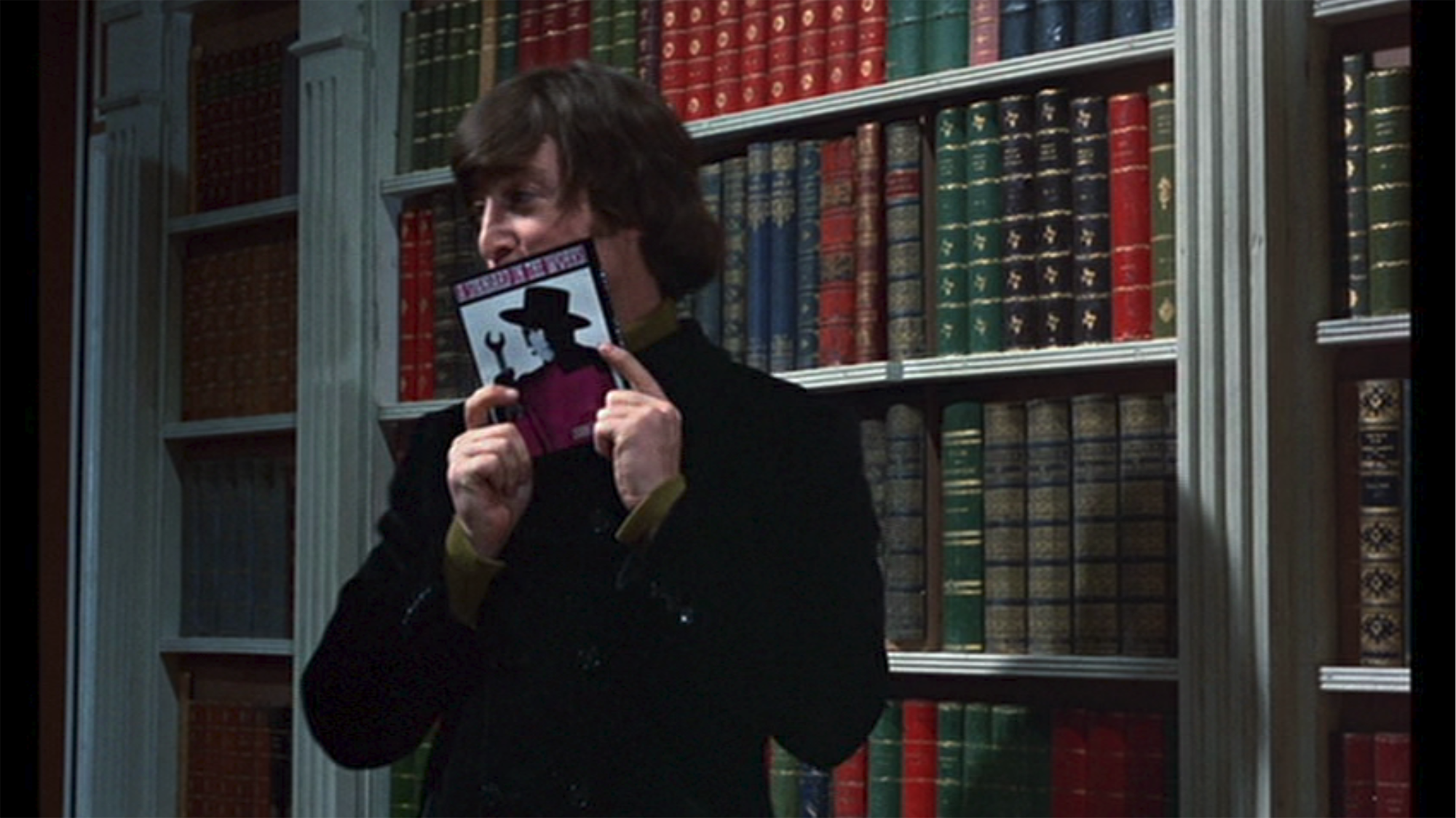 "The Faulty Bagnose"—a playful handwritten poem by John Lennon, published in 1965's A Spaniard in the Works

Supremely rare circa 1965 handwritten poem by John Lennon entitled "The Faulty Bagnose," one page, 10 x 7, published in his second book of nonsense poetry and prose, A Spaniard in the Works. This is the complete and original manuscript as published by Jonathan Cape on June 24, 1965, on pages 34-37, beginning: "Softly softly, treads the Mungle, / Thinner thorn behaviour street. / Whorg canteell whorth hee asbin? / Cam we so all complete, / With all our faulty bagnose?" Lennon has made only one correction to the original manuscript, which comprises 35 lines in seven numbered five-line stanzas. In very good to fine condition, with creasing to the corners, and toning to the right edge.

"The Faulty Bagnose" is a wordplay narrative expressing Lennon's antipathy to established religion. As he explained to the Red Mole underground newspaper in 1971, 'In the two books I wrote, even though they were written in a sort of Joycean gobbledegook, there's many knocks at religion… I've been satirising the system since my childhood.' Parodying the incantation of formal prayer ("Give us thisbe our daily tit"), '…every stanza contains allusions that would affront believers but these references are always so encrypted in 'Lennonese' that most such readers would not catch them… faulty bagnose is the fault finding and faulty bag of noise…' (Gary Tillery, The Lyrical Idealist: A Spiritual Biography of John Lennon, 2009). These religious references went unnoticed at the time and it would be the following year, 1966, that Lennon uttered a throwaway line about the Beatles being 'more popular than Jesus' which would follow his career until his death.

Lennon mixes his admiration for Lewis Carroll and Edward Lear with parody and satire, combining and inventing a language, rhythm and orthography all his own. 'All I'm trying to do is tell a story,' said Lennon, 'and what the words is spelt like is irrelevant really. But if they make you laugh because the word used to be spelt like that, that's great. But the thing is the story. And the sound of the word.' Even the title of the book is Lennon’s wordplay on the expression 'a spanner in the works.'

Lennon spoke of his writing challenges during a promotional interview for the BBC's Tonight programme on 18 June 1965, a few days prior to publication. In the interview, Lennon admitted that although he started writing before he even owned a guitar, his writing always remained a hobby and, before meeting Tom Maschler, he had never considered publishing his work—'If I hadn't been a Beatle I just wouldn't have thought of having the stuff published 'cuz I would've been crawling around, broke, and just writing it and throwing it away. I might've been a Beat poet.' He also revealed in this interview how much more difficult it was to write than his first book, ‘In His Own Write’, which was the product of years of work, whereas with ‘Spaniard’ he not only had to contend with the discipline of writing new work to a publisher's deadline: 'The publisher rang up and said, 'Have you written anything yet?' and I said 'No, I've been writing songs', because I can't do both at once.' Indeed, with the competing pressures of song writing, touring and filming Help!, ‘A Spaniard in the Works’ would be the final book Lennon would publish whilst in the group.

‘A Spaniard in the Works’ was similar in style to its 1964 predecessor ‘In His Own Write,’ but, reflective of a maturing Lennon, was more ambitious in scope and had a particular bite to its subject matter. ’'A Spaniard in the Works’ gave me another personal boost,' said Lennon, 'The book is more complicated; there are some stories and bits in it that even I don't understand, but once I've written something what's the point of letting it hang around in a drawer when I know I can get it published? The plain unvarnished fact is that I like writing, and I'd go on writing even if there wasn't any publisher daft enough to publish them.' Lennon confirmed, there are very few alterations to the text in his manuscripts. In an interview with Wilfred De'Ath for the BBC radio programme, World of Books on June 16, 1965, he admitted, 'I hardly ever alter anything because I'm selfish about what I write or bigheaded about it. Once I've written it, I like it… I might add things when I go over it before it's published, but I seldom take anything out…'—apparently a similar way of working to the recording studio '…rather like a daily newspaperman: write it, see it released very quickly, then move on.'

The manuscript comes from the collection of Tom Maschler and is accompanied by a certificate of authenticity from Tracks Ltd. Like Beatles lyrics, handwritten published manuscripts in Lennon’s hand, are supremely rare and highly sought by collectors. This is an incredibly important artifact showcasing Lennon’s critically-acclaimed literary talents, composed at the height of Beatlemania.