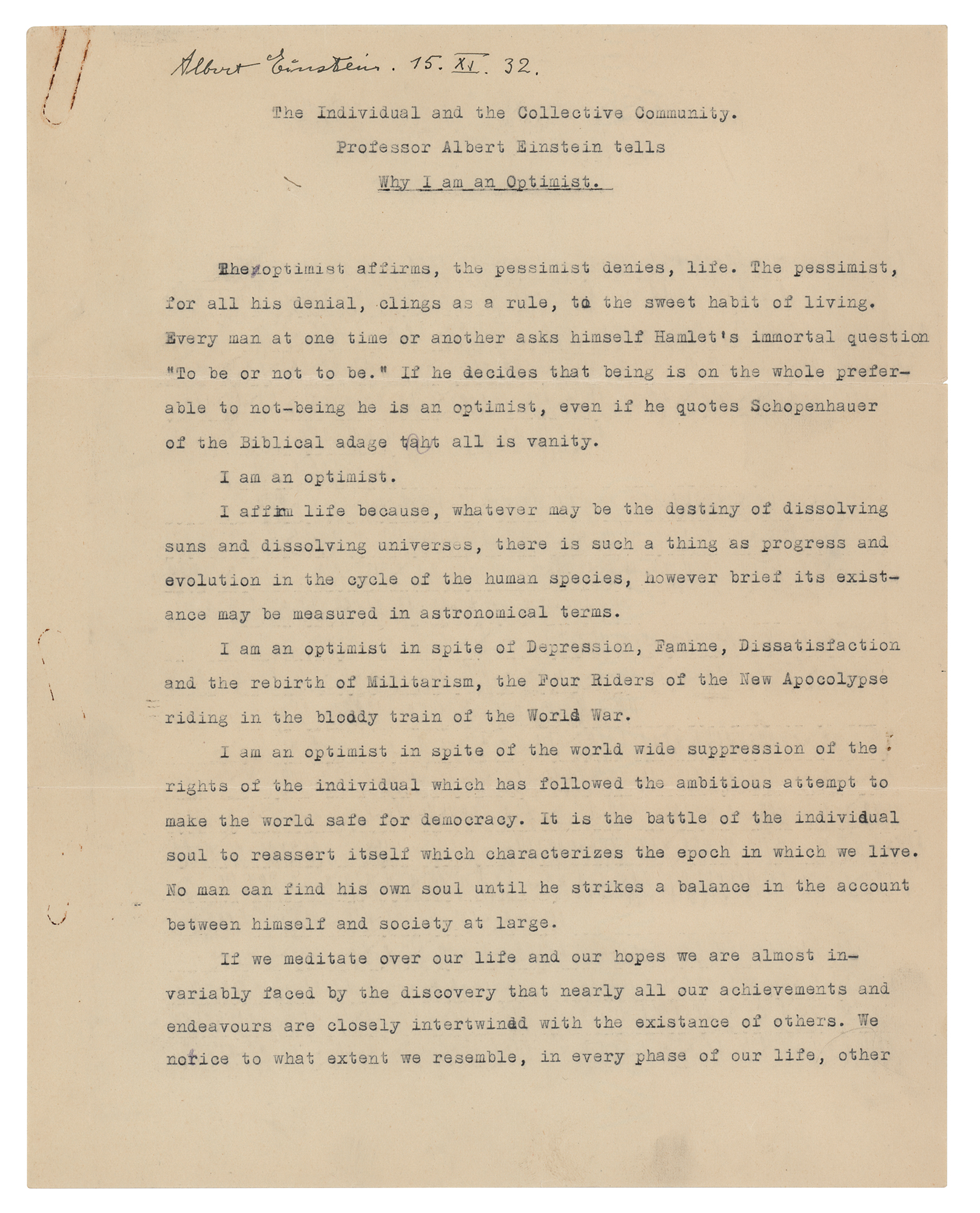 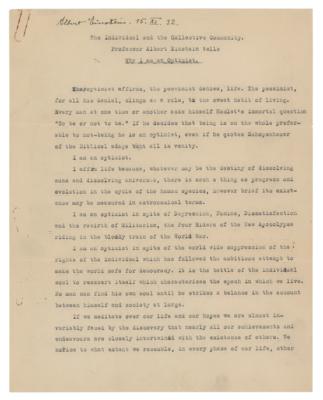 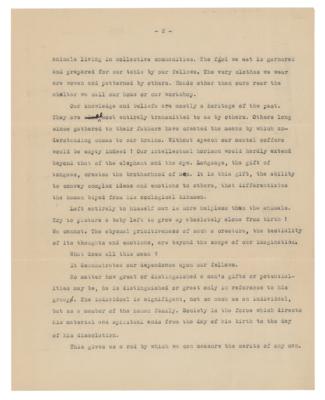 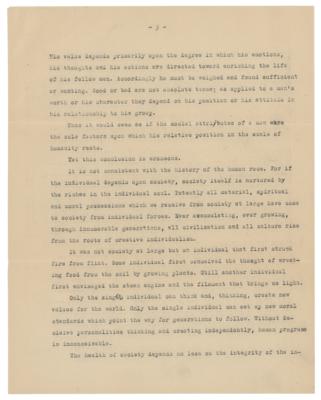 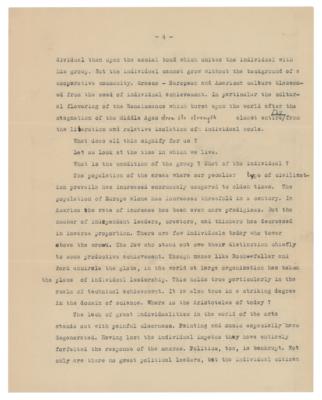 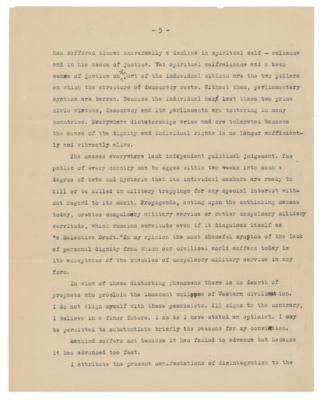 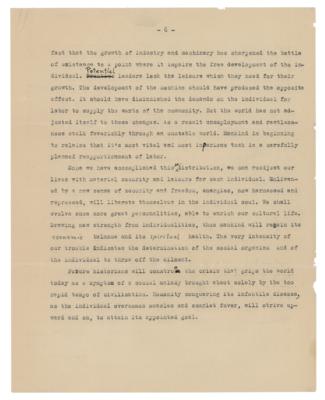 Typed draft of an article entitled “The Individual and the Collective Community. Professor Albert Einstein tells Why I am an Optimist,” signed at the top of the first page in black ink, “Albert Einstein. 15. XI. 32,” six pages, 8.75 x 11.25. The content of this manuscript was later published as the article, ‘Why Civilization Will Not Crash,’ which was featured in the August 12, 1933 issue of Liberty Magazine.

In this important article, Einstein presents a detailed sociological outlook while further confirming that his intellectual abilities extended well beyond scientific borders. Across six pages Professor Einstein stresses the importance of both society and the individual, and the inability of either to function alone. He laments the demise of individualism and the dearth of ‘great’ individuals, whether it be in politics or the arts. Einstein conveys deep concern by the ease in which the masses can be manipulated into serving special, often dictatorial, interests; and he provides evidence of his pacifist tendencies, describing “the most shameful symptom of the lack of personal dignity from which our civilized world suffers today is its acceptance of the shackles of compulsory military service in any form.” The text, which bears some corrections in an editorial hand, in full:

“The optimist affirms, the pessimist denies, life. The pessimist, for all his denial, clings as a rule, to the sweet habit of living. Every man at one time or another asks himself Hamlet’s immortal question ‘To be or not to be.’ If he decides that being is on the whole preferable to not-being he is an optimist, even if he quotes Schopenhauer of the Biblical adage that all is vanity.

I am an optimist.

I affirm life because, whatever may be the destiny of dissolving suns and dissolving universes, there is such a thing as progress and evolution in the cycle of the human species, however brief its existence may be measured in astronomical terms.

I am an optimist in spite of Depression, Famine, Dissatisfaction and the rebirth of Militarism, the Four Riders of the New Apocalypse riding in the bloody train of the World War.

I am an optimist in spite of the worldwide suppression of the rights of the individual which has followed the ambitious attempt to make the world safe for democracy. It is the battle of the individual soul to reassert itself which characterizes the epoch in which we live. No man can find his own soul until he strikes a balance in the account between himself and society at large.

If we meditate over our life and our hopes we are almost invariably faced by the discovery that nearly all our achievements and endeavours are closely intertwined with the existence of others. We notice to what extent we resemble, in every phase of our life, other animals living in collective communities. The food we eat is garnered and prepared for our table by our fellows. The very clothes we wear are woven and patterned by others. Hands other than ours rear the shelter we call our home or our workshop.

Our knowledge and beliefs are mostly a heritage of the past. They are almost entirely transmitted to us by others. Others long since gathered to their fathers have created the means by which understanding comes to our brains. Without speech or mental coffers would be empty indeed! Our intellectual horizon would hardly extend beyond that of the elephant and the ape. Language, the gift of tongues, creates the brotherhood of men. It is this gift, the ability to convey complex ideas and emotions to others, the differentiates the human biped from his zoological kinsmen.

Left entirely to himself man is more helpless than the animals. Try to picture a baby left to grow up absolutely alone from birth! We cannot. The abysmal primitiveness of such a creature, the bestiality of his thoughts and emotions, are beyond the scope of our imagination.

What does all this mean?

It demonstrates our dependence upon our fellows.

No matter how great or distinguished a man's gifts or potentialities may be, he is distinguished or great only in reference to his group. The individual is significant, not so much as an individual, but as a member of the human family. Society is the force which directs his material and spiritual ends from the day of his birth to the day of his dissolution.

This gives us a rod by which we can measure the merits of any man. His value depends primarily upon the degree in which his emotions, his thoughts and his actions are directed toward enriching the life of his fellow men. Accordingly he must be weighed and found sufficient or wanting. Good or bad or not absolute terms; as applied to a man's worth or his character they depend on his position or his attitude in his relationship to his group.

Thus it would seem as if the social attributes of a man were the soul factors upon which his relative position in the scale of humanity rests.

Yet this conclusion is erroneous.

It is not consistent with the history of the human race. For if the individual depends upon society, society itself is nurtured by the riches in the individual soul. Patently all material, spiritual and moral possessions which we receive from society at large have come to society from individual forces. Ever accumulating, ever growing, through innumerable generations, all civilization and all culture rise from the roots of creative individualism.

It was not society at large but an individual that first struck fire from flint. Some individual first conceived the thought of wresting food from the soil by growing plants. Still another individual first envisaged the steam engine and the filament that brings us light.

The health of society depends no less on the integrity of the individual than upon the social bond which unites the individual with his group. But the individual cannot grow without the background of a cooperative community. Graeco-European and American culture blossomed from the seed of individual achievement. In particular the cultural flowering of the Renaissance which burst upon the world after the stagnation of the Middle Ages drew its strength almost entirely from the liberation and relative isolation of individual souls.

What does all this signify for us?

Let us look at the time in which we live.

What is the condition of the group? What of the individual?

The population of the areas where our peculiar type of civilization prevails has increased enormously compared to olden times. The population of Europe alone has increased threefold in a century. In America the rate of increase has been even more prodigious. But the number of independent leaders, creators, and thinkers has decreased in inverse proportion. There are a few individuals today who tower above the crowd. The few who stand out owe their distinction chiefly to some productive achievement. Though names like Rockefeller and Ford encircle the globe, in the world at large organization has taken the place of individual leadership. This holds true particularly in the realm of technical achievement. It is also true in a striking degree in the domain of science. Where is the Aristoteles of today?

The lack of great individualities in the world of the arts stands out with painful clearness. Painting and music especially have degenerated. Having lost the individual impetus they have entirely forfeited the response of the masses. Politics, too, is bankrupt. Not only are there no great political leaders, but the individual citizen has suffered almost universally a decline in spiritual self-reliance and in his sense of justice. Yet spiritual self-reliance and a keen sense of justice on the part of the individual citizen are the two pillars on which the structure of democracy rests. Without them, parliamentary systems are barren. Because the individual has lost these two prime civic virtues, democracy and its parliaments are tottering in many countries. Everywhere dictatorships arise and are tolerated because the sense of dignity and individual rights is no longer sufficiently and vibrantly alive.

The masses everywhere lack independent political judgment. The public of every country can be egged within two weeks into such a degree of heat and hysteria that its individual members are ready to kill or be killed in military trappings for any special interest without regard to its merit. Propaganda, acting upon the unthinking masses today, creates compulsory military service or rather compulsory military servitude, which remains servitude even if it disguises itself as ‘a Selective Draft.’ In my opinion the most shameful symptom of the lack of personal dignity from which our civilized world suffers today is its acceptance of the shackles of compulsory military service in any form.

In view of these disturbing phenomena there is no dearth of prophets who proclaim the imminent collapse of Western civilization. I do not align myself with these pessimists. All signs to the contrary, I believe in a finer future. I am as I have stated an optimist. I may be permitted to substantiate briefly the reason for my conviction.

I attribute the present manifestations of disintegration to the fact that the growth of industry and machinery has sharpened the battle of existence to a point where it impairs the free development of the individual. Potential leaders lack the leisure which they need for their growth. The development of the machine should have produced the opposite effect. It should have diminished the demands of the individual for labor to supply the wants of the community. But the world has not adjusted itself to these changes. As a result unemployment and restlessness stalk feverishly through an unstable world. Mankind is beginning to realize that its most vital and most imperious task is a carefully planned reapportionment of labor.

Once we have accomplished this redistribution, we can readjust our lives with material security and leisure for each individual. Enlivened by a new sense of security and freedom, energies, now harnessed and repressed, will liberate themselves in the individual soul. We shall evolve once more great personalities, able to enrich our cultural life. Drawing new strength from individualities, thus mankind will regain its economic balance and its spiritual health. The very intensity of our trouble indicates the determination of the social organism and of the individual to throw off the ailment.

Future historians will construe the crisis that grips the world today as a symptom of a social malady brought about solely by the too rapid tempo of civilization. Humanity conquering its infantile disease, as the individual overcomes measles and scarlet fever, will strive upward and on, to attain its appointed goal.” In fine condition, with a rusty paperclip impression to the top edge. With the staggering pace of technological change in 21st century society, Einstein’s shrewd assessment that “mankind suffers not because it has failed to advance but because it has advanced too fast” and “is beginning to realize that it’s most vital and most imperious task is a carefully planned reapportionment of labour," is arguably as pertinent today as it was in 1933.