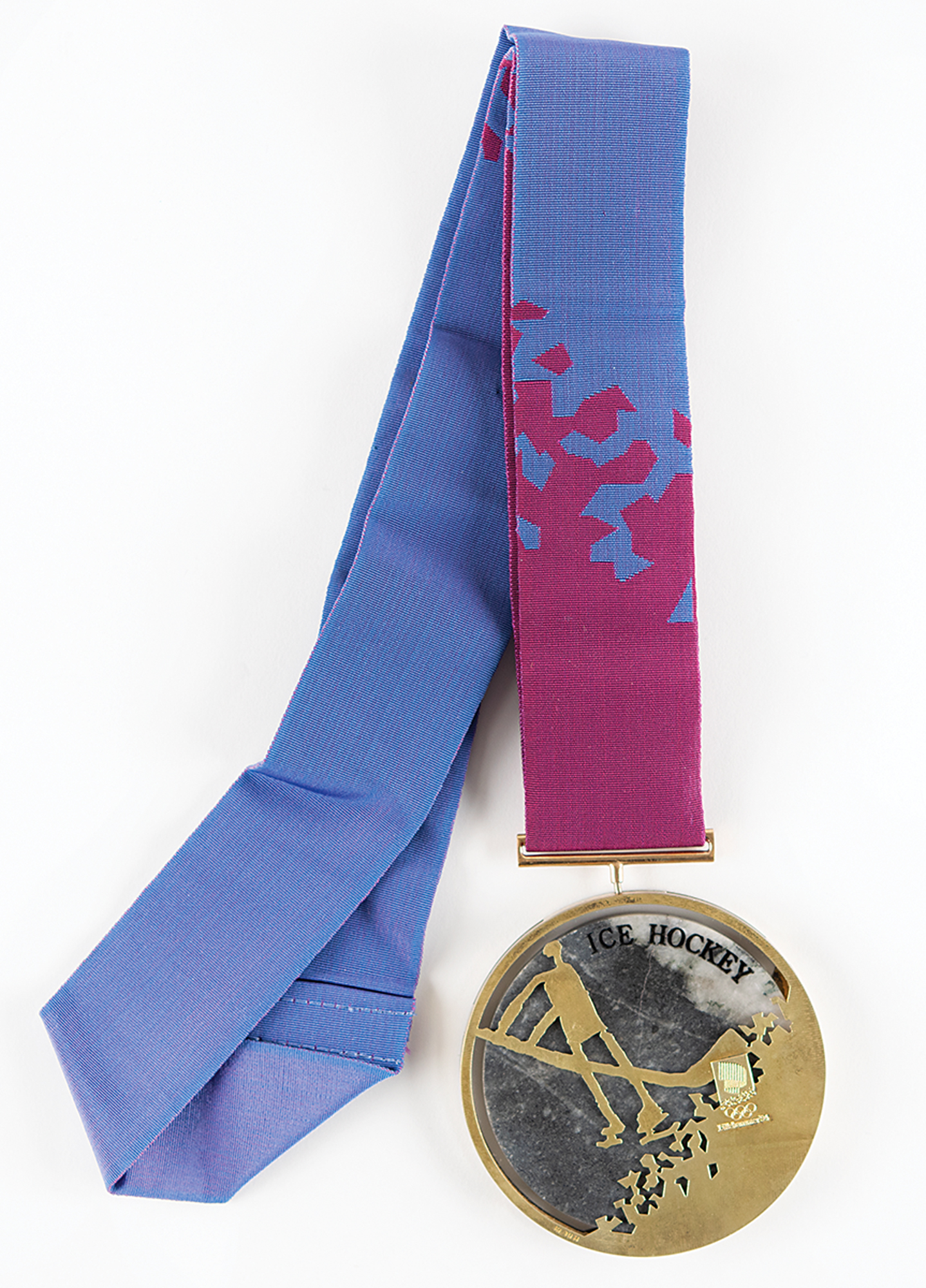 Highly desirable winner's medal issued for the Lillehammer 1994 Winter Olympics. Gilt silver, 82 mm, 142 gm, by Ingjerd Hanevold; manufactured by Th. Marthinsen of Tonsberg. The medal contains a polished circular piece of 600 million-year-old sparagmite that was collected from the Lillehammer Olympic Park during the construction of the Lysgardsbakkene Ski Jumping Arena. The front of the medal features the Olympic rings in gold, with the case’s ice crystal design and the interior stone engraved, “Lillehammer ‘94” and “The XVII Olympic Winter Games”; the reverse retains the ice crystal design and includes the Lillehammer Games emblem with a large pictogram of an ice hockey player, and the inset stone is engraved with the sport: “Ice Hockey.” The rim bears the initials of the designer and mint, and the medal bears slight scuffing, most noticeable to the front side. Includes its original blue and maroon grosgrain ribbon that replicates the ice crystal motif.

According to Hanevold, she designed the medals to be ‘humorous, sober, and recognizable’ and that their design is 'Norwegian through and through.’ Her choice of sparagmite was in keeping with the guiding principles behind the Lillehammer Games as a means of presenting Norway’s genuine natural surroundings and increasing national environmental awareness. ‘The medals symbolize the very essence of Norway, the Norwegian mountain landscape. The stone also serves a symbolic function; it reminds us of how precious our earth and nature are, and how important it is that we protect them.’

Following preliminary action that saw both Canada and Sweden go 3-1, the two teams squared off in the gold medal match after defeating tournament favorites Finland and Russia. As expected the game was tightly contested, with Sweden forcing overtime with less than two minutes to go in regulation. After a scoreless overtime, the winner was determined by a shootout and in dramatic fashion, Peter Forsberg’s seventh round goal on Canadian goaltender Corey Hirsch proved to be the game-clincher. As a result, Sweden’s Tomas Jonsson, Hakan Loob, and Mats Naslund became the first three members of the Triple Gold Club—winners of an Olympic Games gold medal, a World Championship gold medal, and the NHL’s Stanley Cup. A magnificently unique and rare winner’s medal made all the more coveted by its connection to ice hockey, arguably the most storied and competitive of the Winter Olympic sports. Our first winner’s medal from the XVIIth Winter Olympiad.