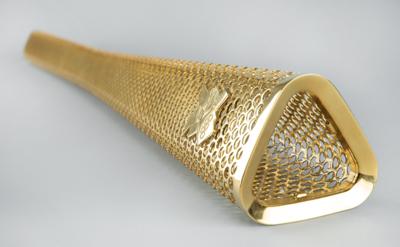 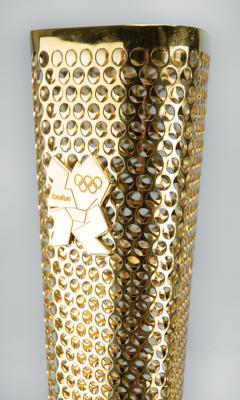 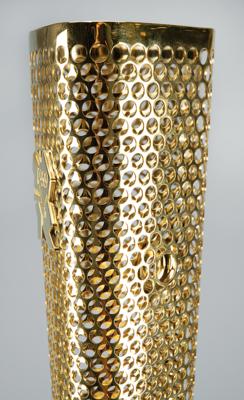 Gorgeous official 2012 London Olympics torch, comprised of metal and aluminum, measuring 31.5″ in length and 4.25″ at its widest point, designed by Edward Barber and Jay Osgerby, and manufactured in collaboration by Tecosim, LPG Gas, Bullfinch and Premier Sheet Metal. The gold-colored torch body consists of two envelopes of aluminum alloy perforated with 8,000 circles, a number which matches with both the amount of torchbearers and the United Kingdom relay miles, and features a golden metal logo of the Games near the top. The triangular shape refers to the multiples of three found in the Olympic movement’s values of excellence, friendship, and respect, the Olympic motto of ‘Citius, Altius, Fortius,’ and London’s hosting of the Games for the third time. The burner and interior ignition parts are absent.

The Olympic flame was lit in Olympia on May 10, 2012, and embarked on an eight-day journey across Greece and Crete before flying over to London. Commencing in Land’s End in Cornwall on May 19, the UK portion of the relay was designed so that 95 percent of the population of the United Kingdom, the Isle of Man, Jersey and Guernsey would be a maximum of one hour from the torch route. After seventy days and 15,775 total km, the massive relay touched down in London’s Olympic Stadium on July 27. A truly regal and highly sought-after example of an Olympic torch, and a work of art that earned the Design of the Year Award at London’s Design Museum.