Handwritten political letter by James Monroe, evaluating his presidential candidacy: "My public life ought to speak for itself" 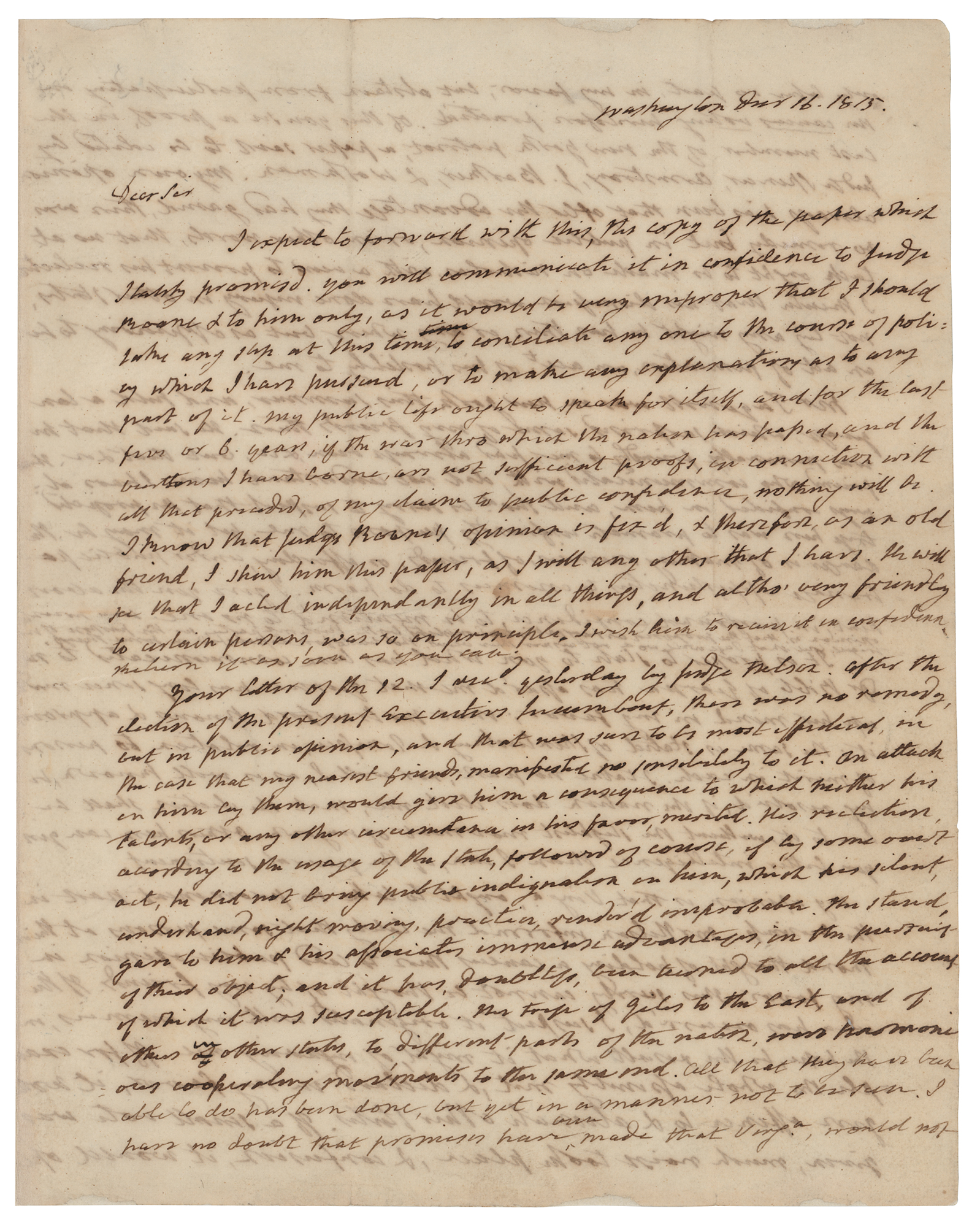 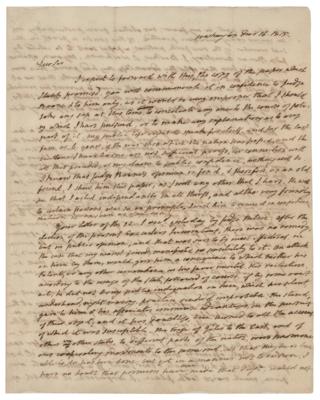 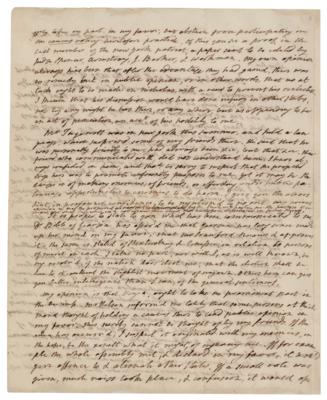 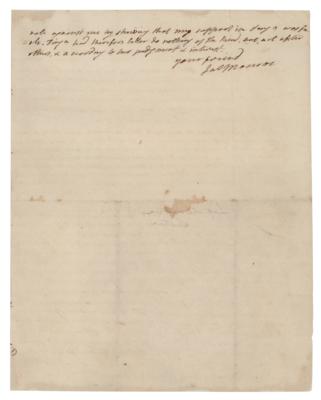 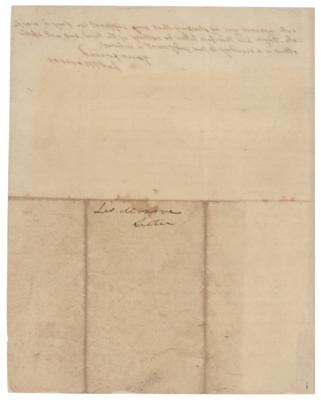 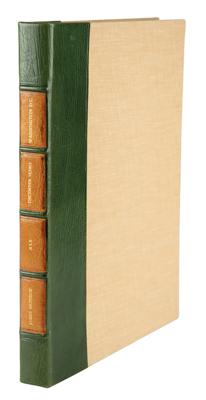 Handwritten political letter by James Monroe, evaluating his presidential candidacy: "My public life ought to speak for itself"

ALS signed "Jas. Monroe," three pages both sides, 8 x 10, December 16, 1815. Handwritten letter to his neighbor, friend, and family physician, Charles Everett, discussing his candidacy for the presidency and the likelihood of his being elected. At the time of his election, Monroe was serving as Secretary of State in President James Madison's administration, and he felt that his public service ought to speak for itself. He writes, in part: "My public life ought to speak for itself, and for the last five or 6 years, if the war thru which the country has passed, and the burdens I have borne, are not sufficient proofs, in connection with all that preceded, of my claim to public confidence, nothing will be."

Monroe goes on to express his doubts about the quality of character of the members of the New York coalition, but indicates that their underhandedness may lend an advantage toward securing the presidential nomination: "After the election of the present Executive Incumbent [Tompkins], there was no remedy but in public opinion, and that was sure to be more effectual, in the case that my nearest friends manifested no sensibility to it. An attack on him by them, would give consequence to which neither his talents or any other circumstance in his favor, merited. His re-election according to the mass of the state, followed of course, if by some overt act, he did not bring public indignation on him, which his silent, underhand, night-moving practice render'd improbable. The stand gave to him & his associates immense advantages in the procuring of their object, and it has, doubtless, been turned to all the account of which it was susceptible. The trip of [William Branch] Giles to the East, and of others in other states to different parts of the nation, were harmonious cooperatory movements to the same end. All that they have been able to do is done, but yet in a manner not to be seen. I have no doubt that promises have been made that Virga. would not only take no part in my favor, but abstain from participation in the coming vote heretofore practic'd….My own opinion always has been that, after the advantage they had gained, there was no remedy but in public opinion, or in other words, that no attack ought to be made on [Wilson Cary] Nicholas, with a view to prevent his re-election. I think that his disposition would have done injury in other states, not by any might he has there, or any where, but as appearing to be an act of persecution, on acct. of his hostility to me. Mr. [Henry] Tazewell [Senator from Virginia and friend of Monroe] was in New York this summer, and held a congress, which comprised some of my friends there. He said that he was personally friendly to me, had always been, &c…I have always confided in him, and shd. be very sorry to suspect that his projected trip was to promote unfriendly purposes to me. Yet it may be. The danger is of making enemies, of friends, or affording, under public patronage, opportunities to enemies to do harm. I give you the above hint, in profound confidence, to be mention'd to no one. My private opinion is that the proposed arrangement is so contemplated by the Richmond parties for the purpose of intrigue, yet that Tazewell wd. not answer their views, that heretofore dissatisfied in some things."

Monroe closes with a restatement of his opinion that he should be elected by his obvious public merits or not at all: "Dr. Bible of Georgia assur'd me that Georgia has long since made up her mind in my favor; that Mr. [William H.] Crawford knows & approves it; the same is stated of Kentucky & Tennessee, in relation to persons of merit in each. I take no part, nor will I, as is well known, being resolv'd, if the nation does elect me, that the election shall be due to it, without the slightest movement of my own. Others here can give you better intelligence than I can, of the general sentiment. My opinion is that Virga. ought to take no prominent part in the business. Mr. Nelson inform'd me lately that some persons at Richmond thought of holding a caucus there to lead public opinion in my favor. This surely can not be thought of by my friends. If the idea has occur'd, I suspect it originated with my enemies, in the hope, be the result what it might, of injuring me. If for example the whole assembly met, & declared in my favor, it would give offence to & alienate other states. If a small vote was given, much noise took place, & confusion, it would operate against me by showing that my support in Virga. was futile. Virga. had therefore better do nothing of the kind, but act after others, & according to her judgment and interest." Expertly silked and in fine condition. Accompanied by an engraved portrait and a handsome custom-made finely bound quarter-leather case.

Monroe was loathe to be seen as the 'Virginia' candidate, as many people felt that the state had theretofore too much influence on the national government under the so-called 'Virginia Dynasty' of Washington, Jefferson, and Madison. New York, then the most populous state in the nation, felt it was their turn to have a candidate in the executive office. Monroe feared that two of his fiercest critics, Senator William Branch Giles and Representative Wilson Cary Nicholas (both Virginians), might conspire with the New York delegation to form an anti-Monroe coalition. His greatest rival for the nomination, however, was Senator William H. Crawford of Georgia. Ultimately, Crawford stepped back from the nomination, clearing the way for Monroe, and served as Monroe's Secretary of the Treasury. Another possible rival was New York Governor Daniel D. Tompkins, who would become Monroe's eventual vice president. Although Monroe says some very unflattering things about his character in the present letter, the political situation made it clear that having the New Yorker on the ticket was a way of placating northern interests. This choice would help to deliver New York's 29 electoral votes to the Monroe-Tompkins ticket, thereby securing a landslide victory over Federalist Rufus King in the 1816 presidential election. A superb, lengthy political letter from the hand of James Monroe.