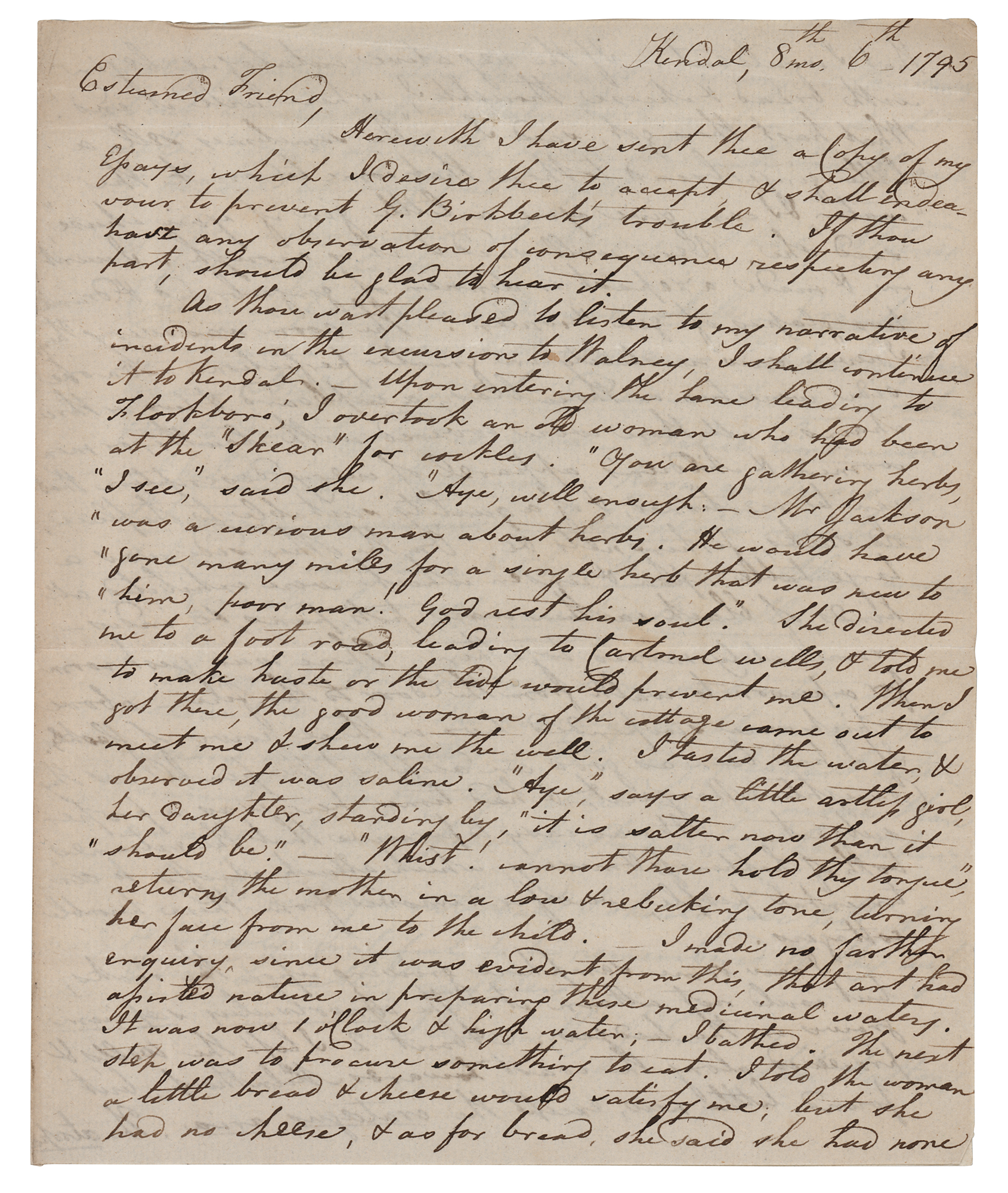 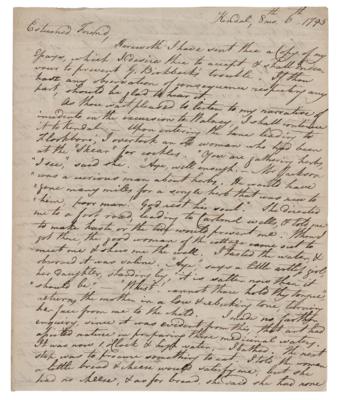 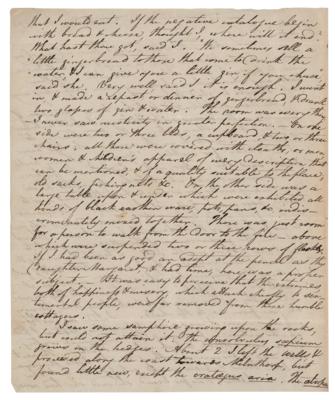 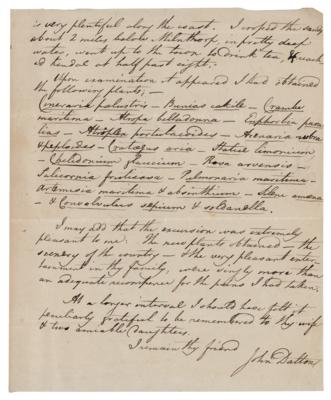 English chemist, meteorologist, and physicist (1766-1844) best known for his pioneering work in the development of modern atomic theory. ALS, three pages on two adjoining sheets, 7.25 x 9, October 6, 1795. Handwritten letter to an "Esteemed Friend," in part: "Herewith I have sent thee a Copy of my Essays, which I desire thee to accept & shall endeavour to prevent G. Birkbeck's trouble…As thou shall want pleased to listen to my narrative of incidents in the excursion to Walney, I shall continue it to Kendal…I overtook an old woman who had been at the 'Skear' for cockles. 'You are gathering herbs, I see,' said she. 'Aye, well enough—Mr. Jackson was a curious man about herbs. He would have gone many miles for a single herb that was new to him, poor man. God rest his soul.' She directed me to a foot road…and told me to make haste or the tide would prevent me. When I got there, the good woman of the cottage came out to meet me & show me the well. I tasted the water, & observed it was saline. 'Aye,' says a little artless girl, her daughter, standing by, 'it is saltier now than it should be.' 'Whist! cannot thou hold thy tongue,' returns the mother in a low & rebuking tone, turning her face from me to the child. I made no farther enquiry, since it was evident from this, that art had assisted nature in preparing these medicinal waters. It was now 1 o'clock & high water;—I bathed. The next step was to procure something to eat. I told the woman a little bread & cheese would satisfy me, but she had no cheese, & as for bread, she said she had none that I would eat. If the negative catalogue begin with bread & cheese, thought I, where will it end? What hast thou got, said I. 'We sometimes sell a little gingerbread to those that come to drink the water, & I can give you a little gin, if you choose,' said she. Very well, said I, it is enough. I went in & made a repast or dinner of gingerbread & drunk two glasses of gin & water. The room was everything—I never saw rusticity in greater perfection. On one side were two or three beds, a cupboard, & two or three chairs; all these were covered with cloaths, or men, women & children's apparel of every description that can be mentioned, & of a quality suitable to the place; old sacks, fishing nets, &c. On the other side was a large table upon & under which were exhibited all kinds of black earthenware, pots, pans &c, indiscriminately mixed together. There was just room for a person to walk from the door to the fire—above which were suspended two or three rows of flasks…It was easy to perceive that the extremes, both of happiness & misery, which attach chiefly to sentimental people, were far removed from these humble cottages.

I saw some samphire growing upon the rocks, but could not attain it; the convolvulus saepinum grows on the hedges. About 2 I left the walls, & proceeded along the coast towards Milnthorpe, but found little new, except the crataegus aria. The atropa is very plentiful upon the coast. I crossed the sands about 2 miles below Milnthorpe, in pretty deep water, went up to the town to drink tea, & reached Kendal at half past eight." He goes on to list the Latin names of several plants that he was able to obtain. In fine condition.