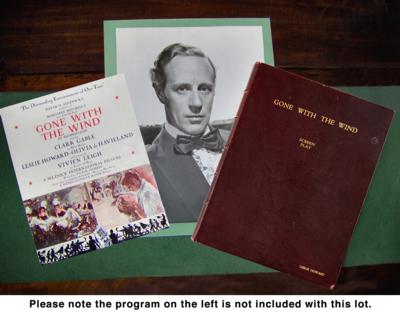 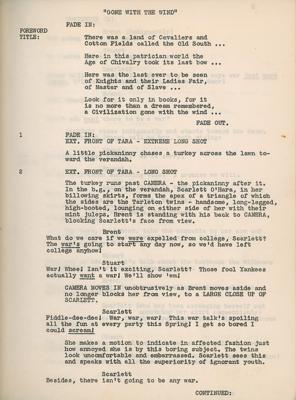 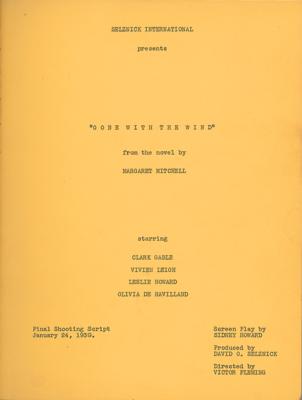 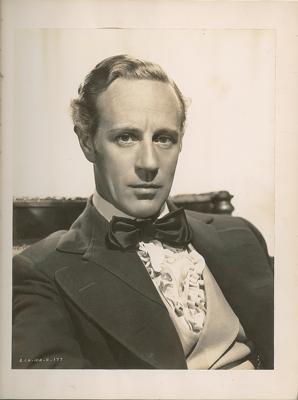 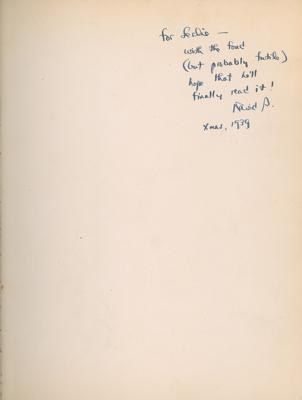 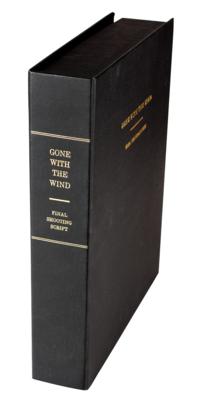 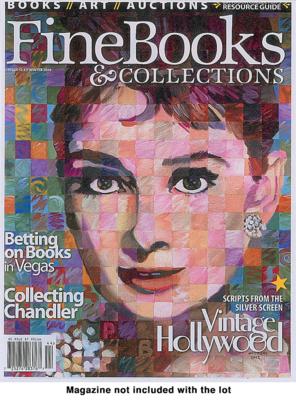 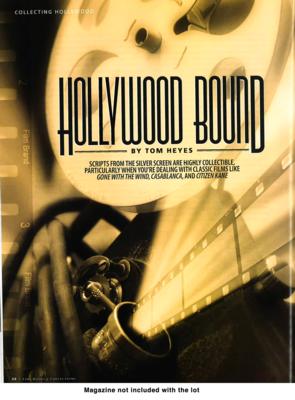 Previous Lot
Next Lot
Login or Register To Bid Add to BidTracker
Estimate: $15000+

Final shooting script for the classic 1939 Selznick International film Gone With the Wind, richly custom-bound in full maroon morocco by producer David O. Selznick and presented to actor Leslie Howard as a Christmas gift following the release of the movie. The front cover and spine are beautifully gilt-stamped, "Gone With the Wind, Screen Play," with the recipient's name stamped at the bottom right of the front cover, "Leslie Howard." Perfectly signed and inscribed on the first free end page in fountain pen, "For Leslie—with the fond (but probably futile) hope that he'll finally read it! David S., Xmas, 1939." The volume totals 273 pages with gilt top edges, comprising the 256-page script, original yellow Selznick International wrappers, actor and staff credit pages, endpapers, and eight pages with affixed glossy stills from the film bound in. In fine condition, with light cover wear. Accompanied by a custom-made clamshell case.

When Gone With the Wind finished filming, and indeed as each person finished their respective employment as production progressed, David O. Selznick collected and destroyed the shooting scripts for reasons of secrecy. Following the film's Atlanta premiere on December 15, 1939—just in time for Christmas—Selznick personally inscribed and signed specially bound copies of the final GWTW shooting script and presented them to a certain number of cast, crew, and associates. His pithy and perfectly in-context inscriptions in these prized scripts add an exceptional dimension—in this instance he refers to the fact that Leslie Howard apparently never read Margaret Mitchell's book or the full script, learning only the lines necessary for his portrayal of the weak-willed Ashley Wilkes. Howard did not want the role, but was persuaded by Selznick to take it when he was also offered the Associate Producer position on Intermezzo in which he starred with Ingrid Bergman, shooting some of that film at the same time as GWTW. Howard also received the highest rate of any of the GWTW stars at $7,500 per week. It was Howard's last American film, and he was the only actor not to attend the Atlanta premiere (director Victor Fleming did not either, due to a falling out with Selznick). Howard instead returned to Britain to help with the effort in World War II, and he was killed when his plane was shot down during a diplomatic mission in 1943.

While most of these scripts were specially bound in maroon cloth and leather, a select handful of recipients—including stars Clark Gable, Vivien Leigh, Leslie Howard, and Olivia de Havilland—received deluxe full leather bindings. The script presented to Olivia de Havilland appeared at auction in 1997, where it achieved a $40,250 result; a year earlier, Clark Gable's deluxe script achieved the remarkable price of $244,500. An exceptional, one-of-a-kind star script from one of Hollywood’s iconic films.

An article that appeared in the Winter 2014 issue of Fine Books & Collections depicts this script and discusses Selznick’s Gone With the Wind presentation scripts in great detail.