Rare handwritten letter by Thomas Paine, interceding with the president of the Bank of North America on behalf of his best friend 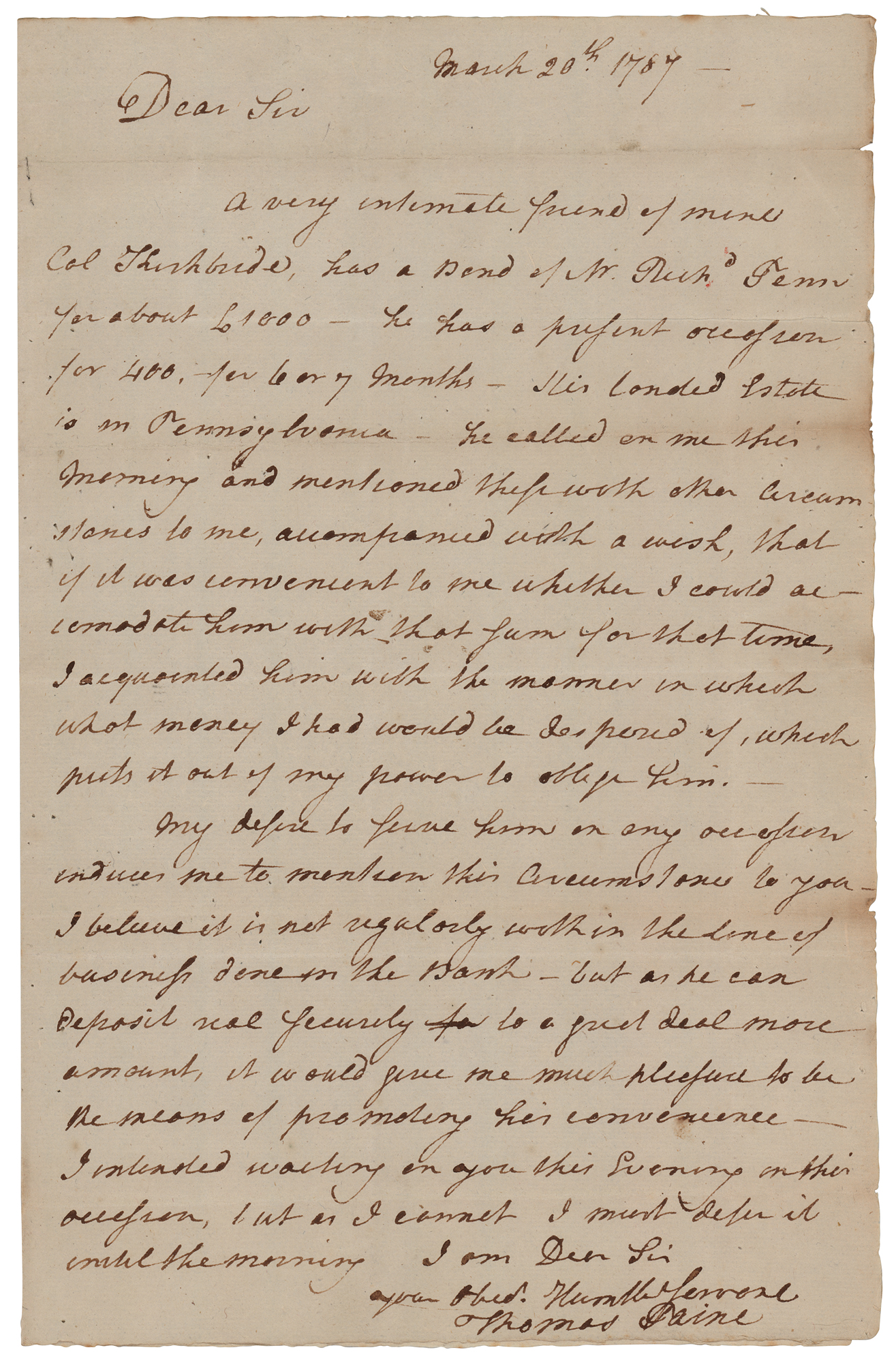 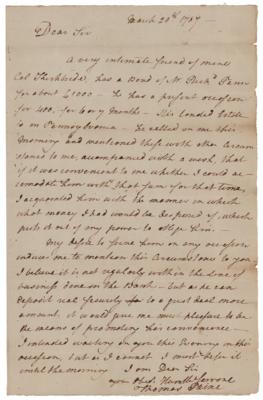 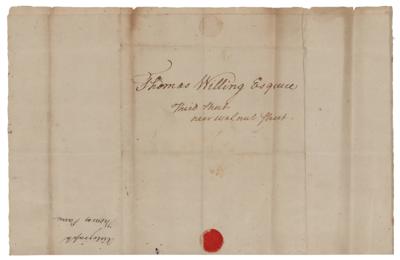 Rare handwritten letter by Thomas Paine, interceding with the president of the Bank of North America on behalf of his best friend

Rare ALS, signed "Thomas Paine," one page, 8.5 x 13, March 20, 1787. Handwritten letter to Thomas Willing, seeking a financial favor for his best friend, Col. Joseph Kirkbride. In full: "A very intimate friend of mine Col. Kirkbride, has a Bond of Mr. Rich'd Penn for about £1000—he has a present occasion for 400, for 6 or 7 months—His landed Estate is in Pennsylvania—he called on me this morning and mentioned these with other circumstances to me, accompanied with a wish, that if it was convenient to me whether I could accommodate him with that sum for that time, I acquainted him with the manner in which what money I had would be dispersed of, which puts it out of my power to oblige him. My desire to serve him on any occasion induces me to mention this circumstance to you—I believe it is not regularly within the line of business done in the Bank—but as he can deposit real security to a great deal more amount, it would give me much pleasure to be the means of promoting his convenience—I intended waiting on you this Evening on this occasion, but as I cannot I must defer it until the morning." In fine condition.

Paine had been forced to flee Philadelphia during Sir William Howe's invasion of 1777, and sought refuge at the home of his friend Joseph Kirkbride in Bucks County, Pennsylvania. When Paine found himself in dire financial circumstances in the next decade, he once again took up residence with Kirkbride, who had moved to Bordentown, New Jersey, after the British burned his Pennsylvania farm. When his finances improved, Paine purchased a nearby home in Bordentown, where a statue of him still stands today.

The recipient of this letter, Thomas Willing, formerly a mayor of Philadelphia, was at this time president of the Bank of North America—the first bank chartered by the Continental Congress, based upon a plan presented by Robert Morris which drew from Alexander Hamilton's recommendations. Paine was an important supporter of the Bank, and stood by Willing during the political struggle over its recharter. In this instance, it seems that Paine's friend faced a misfortune associated with the end of the Revolution: he held a bond with Richard Penn, the Loyalist governor of Pennsylvania, who was then living in London. Financial obligations with American Loyalists were in an ambiguous state after the conclusion of the Treaty of Paris because of disputes over two of its provisions: the clause requiring the British to compensate for slaves who ran away to British lines, and the clause requiring states to compensate for lands and properties confiscated from Loyalists. Ultimately, Penn would be allowed compensation by the US government for the loss of his proprietary rights in Pennsylvania.