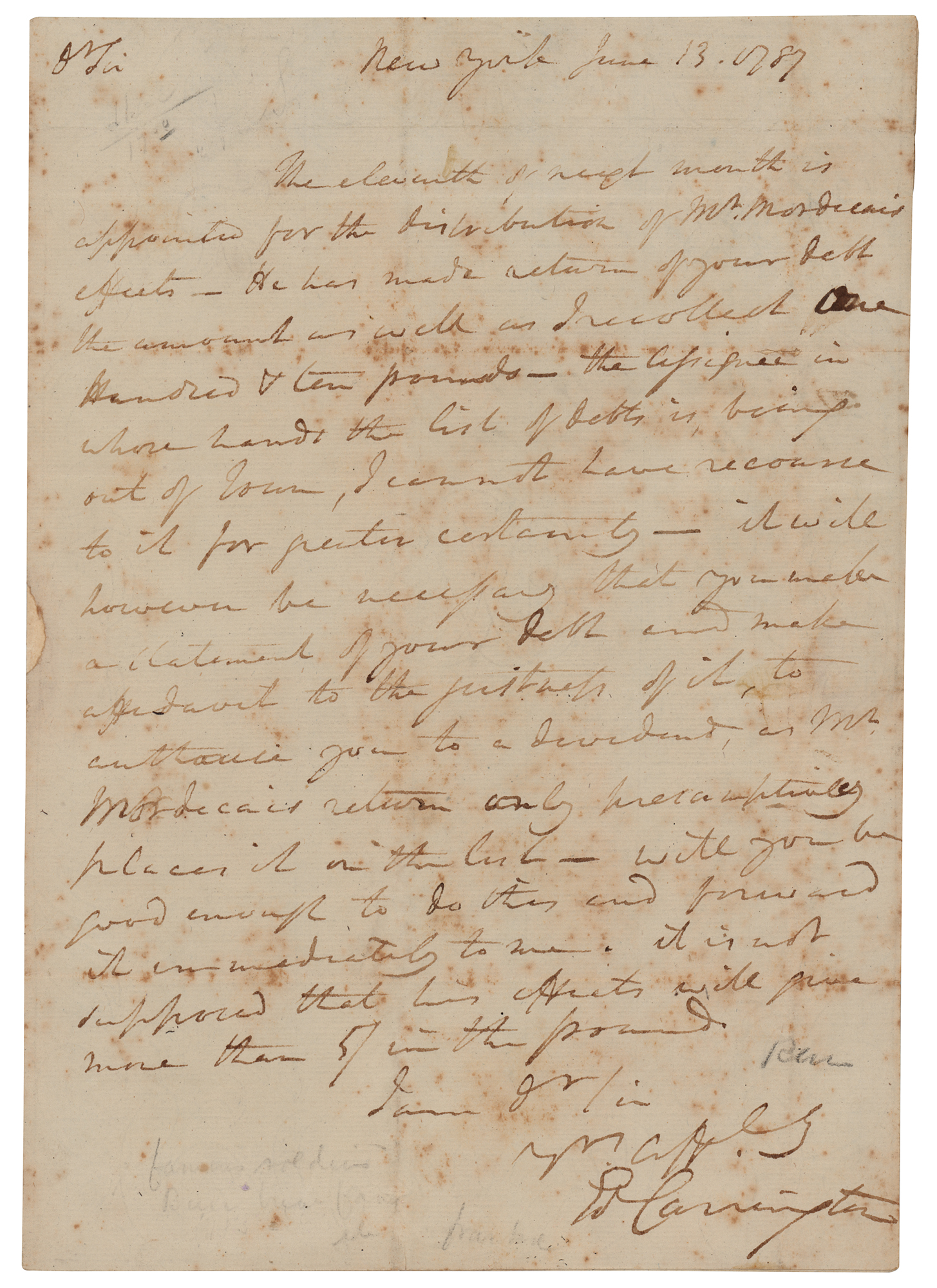 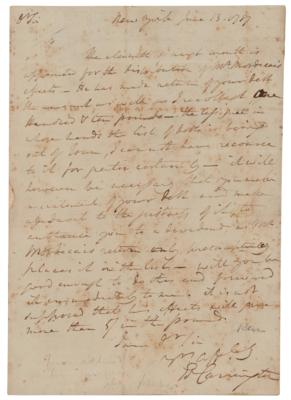 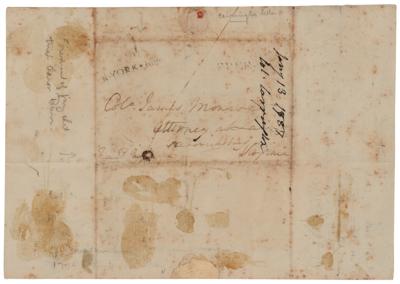 Previous Lot
Next Lot
Login or Register To Bid Add to BidTracker
Estimate: $4000+

ALS signed "Ed. Carrington," one page, 7.25 x 10.5, June 13, 1787. Edward Carrington, a soldier and statesman from Virginia, writes to "Col. James Monroe, Attorney" to inform him of the repayment of a debt owed by the bankrupt Jacob Mordecai, a noteworthy American-born Jewish businessman and partner of financier Haym Salomon. Carrington writes, in part: "The eleventh of next month is appointed for the distribution of Mr. Mordecai’s effects. He has made return of your debt, the amount as well as I recollect one hundred & ten pounds. The assignee in whose hands the list of debts is being out of Town, I cannot have recourse to it for greater certainty—it will however be necessary that you make allotment of your debt and make affidavit for the justness of it, to [entitle] you to a dividend, as Mr. Mordecai’s return only presumptively places it on the list. Will you be good enough to do this and forward it immediately to me?" Addressed on the integral leaf to Monroe by Carrington, and franked "Free, Ed. Carrington" at the bottom; docketed in Monroe's hand, "June 13, 1787, Col. Carrington." In very good condition, with overall foxing, and adhesive residue stains to the integral address leaf, which also display a repair to seal-related paper loss.

Born in Philadelphia, Jacob Mordecai served as a clerk under Col. David Franks during the Revolution; afterwards he resided in New York, where in 1784 he formed a partnership with Haym Salomon, a leading financier of the patriot cause during the Revolution. They maintained an auction house at the corner of Wall and Pearl streets. Mordecai carried on their business at 22 Wall Street after Salomon’s death in 1785, until Mordecai himself went bankrupt in the winter of 1786.

In a financial transaction prior to Mordecai's bankruptcy, James Monroe wrote a promissory note that said his uncle Joseph Jones would pay the amount of $530; Alexander Hamilton signed the note as security. Monroe then gave the note to Mordecai to convert to cash. When Mordecai went bankrupt and was unable to pay the full amount, Monroe was left in an uncomfortable position.

In February, Monroe wrote to James Madison: 'The day before I left New York I experienc’d an unfortunate disaster, particularly upon that occasion. I had drawn a bill on mr. Jones endors’d by Colo. Hamilton for 530. dolrs. & committed it to a broker mr. Mordicai to negotiate for me. He was to have furnish’d the money the day appointed for me to leave the city. On that day he fail’d, having previously recd. & dispos’d of my money. He advanc’d me 90£ however of that currency & assur’d me he wod. certainly indemnify me altogether. I hear from Carrington he hath made a return of my debt & that he will be able to pay a considerable part of it & perhaps the whole.'