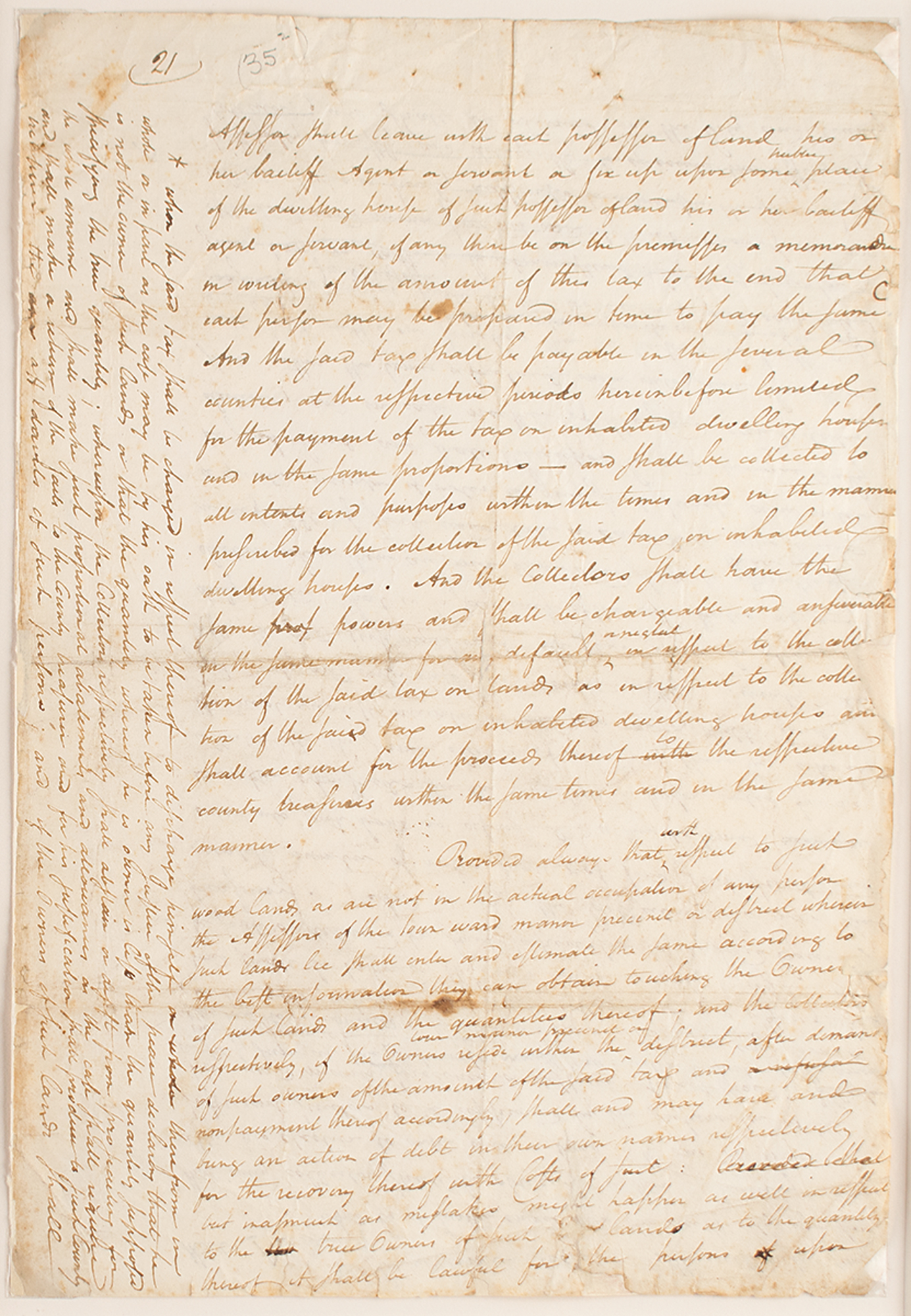 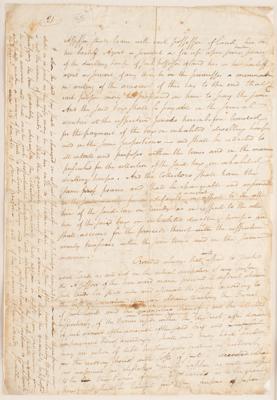 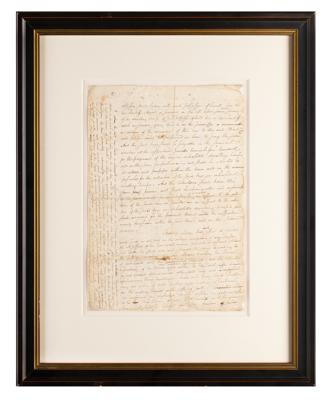 Previous Lot
Next Lot
Login or Register To Bid Add to BidTracker
Estimate: $15000+

Handwritten manuscript by Alexander Hamilton, one page, 8.25 x 12, no date but circa March 1787. The autograph manuscript for pages 21-22 of Hamilton's third draft of a New York State bill for 'An Act Raising Certain Yearly Taxes within This State.' In part: "Assessor shall leave with each possessor of land his or her bailiff Agent or servant or fix up upon some public place of the dwelling house of such possessor of land his or her bailiff agent or servant, if any there be on the premisses a memorandum in writing of the amount of this tax to the end that each person may be prepared in time to pay the same And the said tax shall be payable in the several counties at the respective periods hereinbefore limited for the payment of the tax on inhabited dwelling houses, and in the same proportions, and shall be collected to all intents and purposes within the times and in the manner prescribed for the collection of the said tax on inhabited dwelling houses." Corner-mounted, matted, and framed to an overall size of 16 x 20. In very good to fine condition, with light overall creasing, and professional repairs (and possible complete backing) to repair small areas of paper loss. The balance of Hamilton's draft is held as part of the Hamilton Papers in the Library of Congress; this leaf was attached to an unrelated document decades ago, and retained by his descendants until 2017.

Hamilton served one term in the New York State Assembly from January 12-April 21, 1787. On February 9, a committee introduced a proposal for a new and fairer system of taxation. The New York Daily Advertiser summarized Hamilton’s remarks: 'It was agreed on all hands that the system heretofore in use was full of defects; both in the view of equality among individuals and of revenue to the state. From the legislature to the assessors, all was conjecture and uncertainty.' Hamilton concluded that equality and certainty were the two great objects to be aimed at in a system of taxation, and felt that his new system—though still not perfect—approached greater equality and left nothing to discretion.

Hamilton invited his fellow delegates to contribute—observing that 'any change would be for the better'—and twenty-two members of the New York State Assembly and the New York State Senate obliged, offering amendments to Hamilton’s bill. The 'Act for raising monies by tax,' passed on April 11, 1787, was substantially shorter than the draft and did not include this text. Rather than imposing duties on specific possessions and implementing detailed reforms, the final act levied a quota on each county in the state to raise a total of £50,000, and made the assessors in each county responsible for determining taxable property and the rates of taxation.