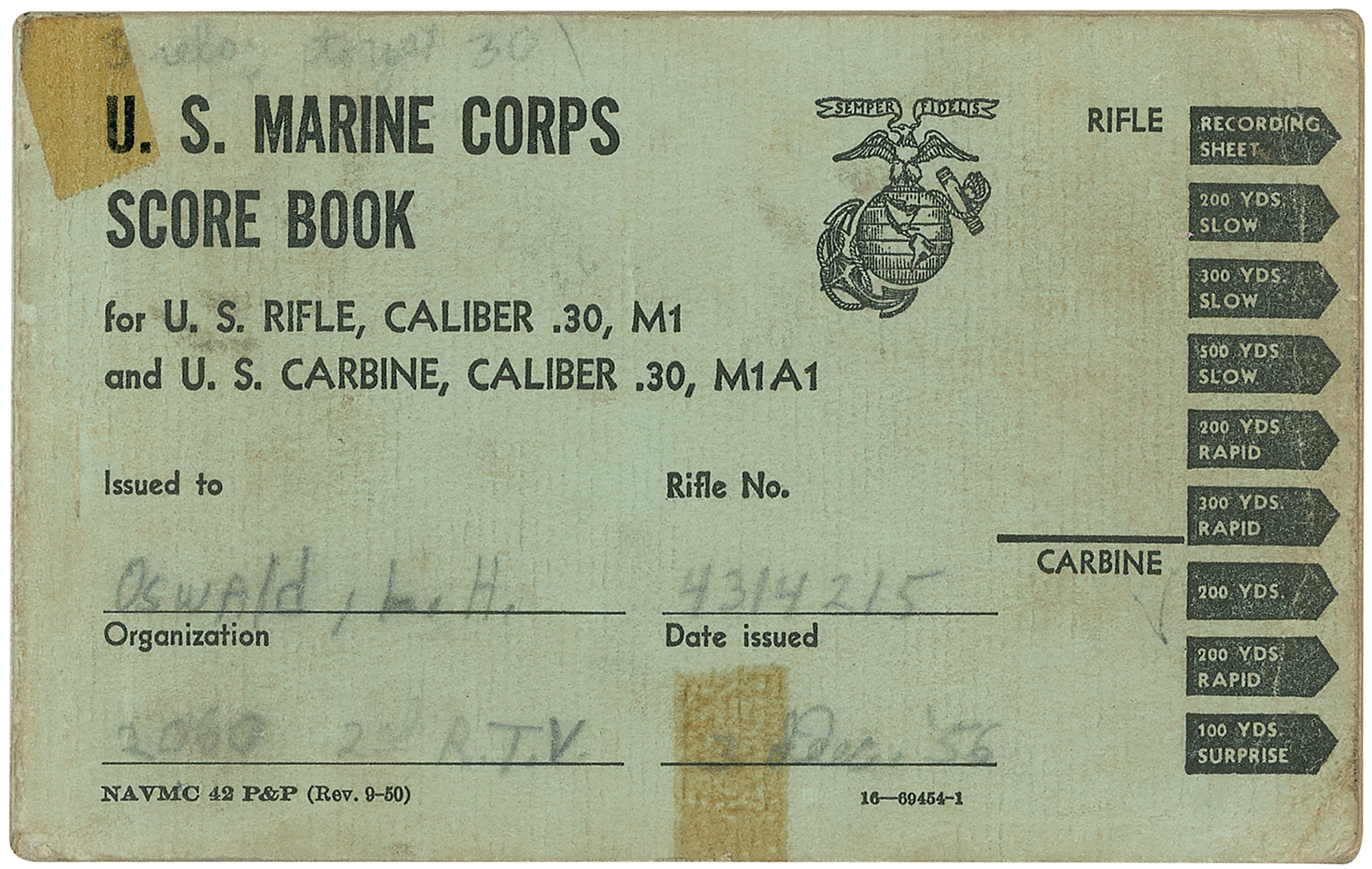 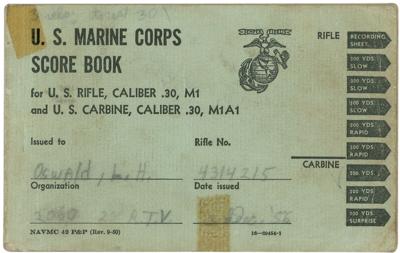 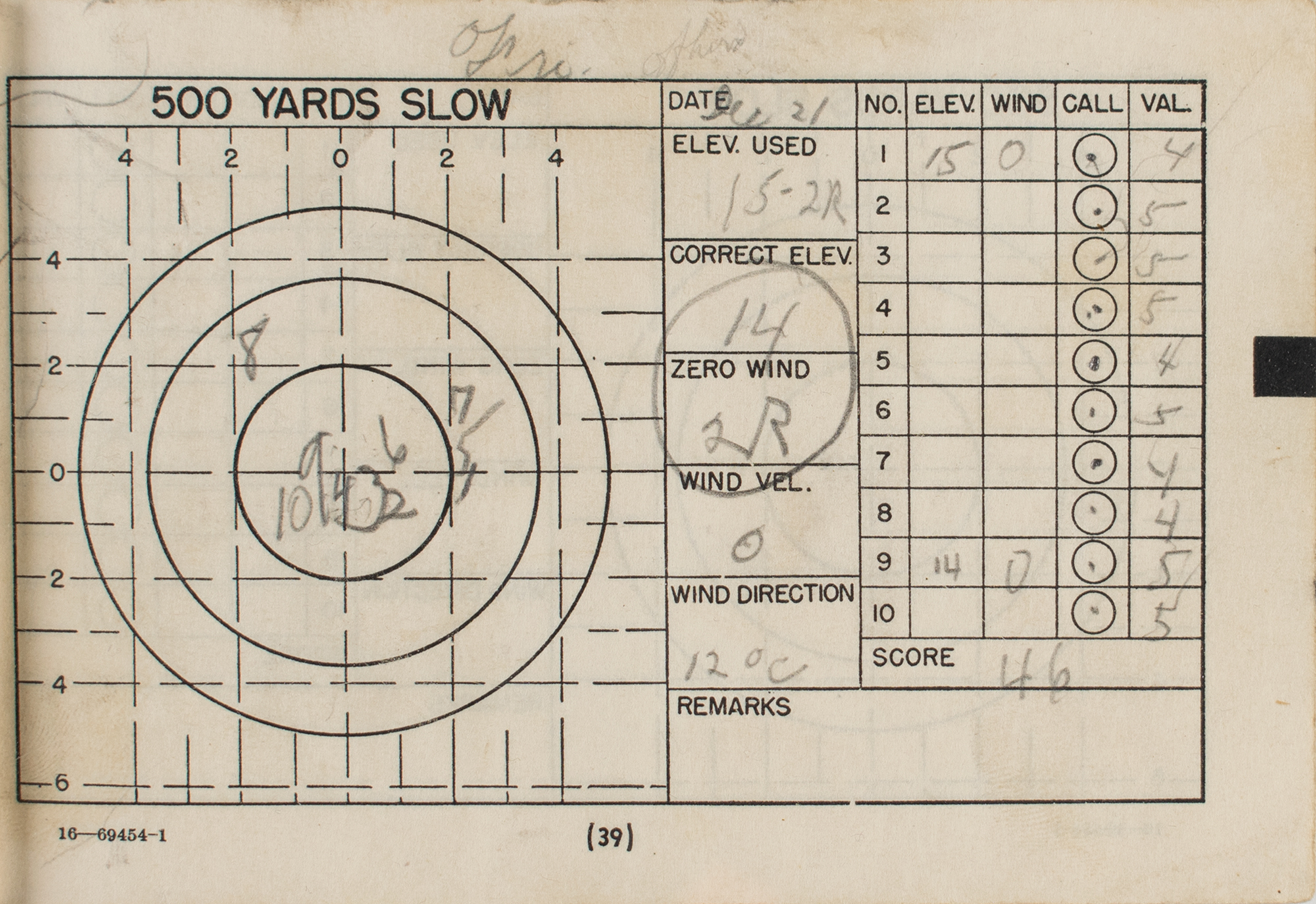 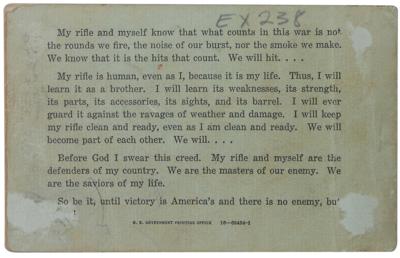 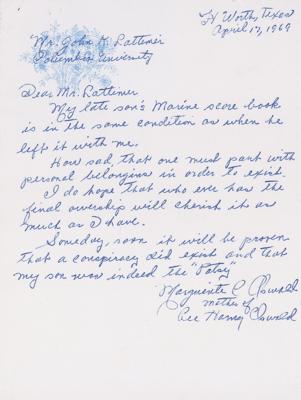 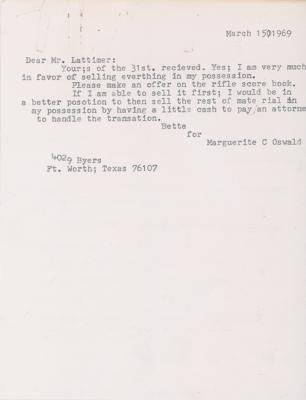 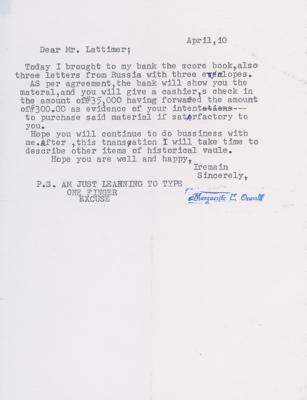 Lee Harvey Oswald's personally-owned and used softcover workbook entitled “U. S. Marine Corps Score Book for U. S. Rifle, Caliber .30, M1 and U. S. Carbine, Caliber .30, M1A1,” 80 pages, 6" x 3.75", filled out by Oswald on the front cover in pencil with his name, “Oswald, L. H.,” rifle number, “4314215,” organization, “2060 2nd R.T.V.,” and date issued, “3 Dec. ’56.” The first few pages contain instructions for shooting and scorekeeping, with pencil notations by Oswald. The majority of the book consists of target diagrams and tables filled out in pencil by Oswald, plotting his shots on the diagrams and recording relevant details like date, elevation and wind speed/direction. Oswald also generally indicates his firing position in the upper margin, such as "kneeling," "sitting," or "prone." In total Oswald completed 32 pages throughout the month of December, with two being practice 'samples' and the rest his actual results. In very good to fine condition, with two toned tape remnants affixed to the front cover, light general soiling, and three small areas of surface loss to the back cover. Accompanied by interesting correspondence from 1969 between Marguerite Oswald and Dr. John Lattimer, a notable researcher of the Kennedy assassination, who originally purchased the score book from her; this includes one handwritten letter from Dr. Lattimer to Marguerite Oswald and four letters and envelopes from Marguerite Oswald to Dr. Lattimer, the most fascinating being one dated April 17, 1969, Ft. Worth, signed "Marguerite C. Oswald, mother of Lee Harvey Oswald," in part: “My late son’s Marine score book is in the same condition as when he left it with me…Someday soon it will be proven that a conspiracy did exist and that my son was indeed the ‘patsy.’”

On December 21, 1956, Oswald was tested for marksmanship with his rifle on five different exercises—from 200, 300 and 500 yards firing slowly and from 200 and 300 yards firing rapidly. Based on these results a Marine would be rated by a defined scoring system: over 190 points was considered a marksman, over 210 was a sharpshooter, and over 220 was considered an expert. Oswald scored 212 and was rated in the middle as a sharpshooter. For the slow test (page 5), the target was 10" tall by 10" wide. For the rapid fire test the target was 26" wide by 19" tall. A closer examination of Oswald's 200 yard rapid fire result shows he hit 8/10 bullseyes and scored 48 out of 50. An expert rating on this test would have required a minimum score of 44 points (44 points x 5 tests = 220 points required). On his next test, 300 yards in rapid fire, Oswald hit 7/10 bullseyes scoring 46 out of 50. Again an expert rating on this test would have required a result of 44. So in both tests that most closely matched the conditions in the Kennedy assassination for rapid fire shooting Oswald scored above an expert level. Additionally on his third test from 500 yards firing slowly, Oswald scored 46 out of a possible 50: again shooting above an expert level.

For the past 57 years many have claimed Oswald was a lousy shot and could not have killed Kennedy. These three test scores show otherwise. His above-expert level in three of five tests shows he was capable of assassinating President Kennedy either alone, or—if chosen by conspirators as a 'patsy'—had the appropriate background and capabilities. The Warren Commission used only one piece of physical evidence to state that Oswald was capable of assassinating President Kennedy—and it was these scorecards from December 21, 1956. These scorecards can be found in Warren Commission Volume 16, pgs. 639-679, as Commission Exhibit 239. These results enabled the Warren Commission, in their single-volume final report (pgs. 18-19), to state: "The Commission has concluded further that Oswald possessed the capability with a rifle which enabled him to commit the assassination."

An extraordinary piece of history used as a major exhibit of evidence in the Warren Commission conclusions implicating Lee Harvey Oswald to the Kennedy assassination.