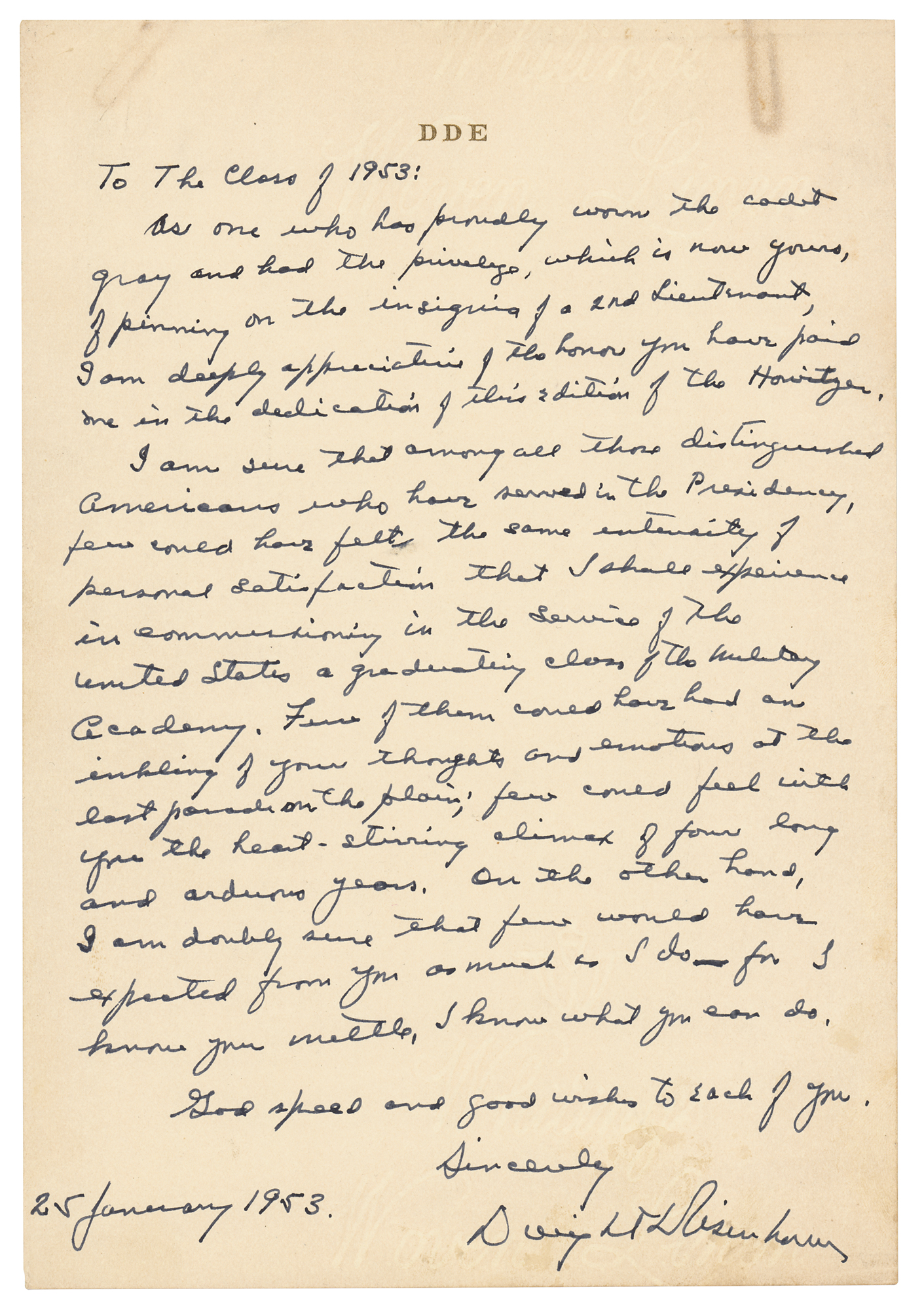 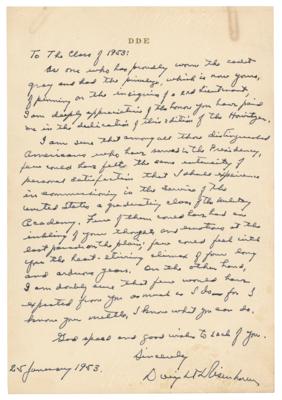 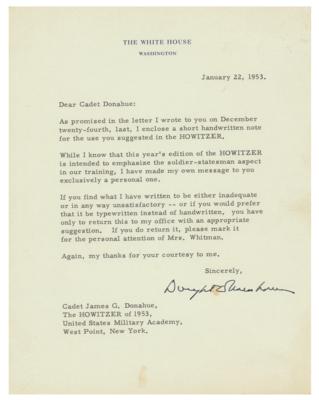 Exceedingly rare ALS signed in full by President Dwight D. Eisenhower, sent to the 1953 graduating class of the United States Military Academy at West Point, penned neatly on his personal 7.25 x 10.25 stationery and dated to January 25, 1953, just five days into his new role as the nation's chief executive. Included with the handwritten letter is a transmittal TLS from Eisenhower dated three days prior on January 22nd, forwarding his dedication to Cadet James G. Donahue, then editor of the USMA yearbook, the Howitzer.

Eisenhower's handwritten dedication letter, in full: "To the Class of 1953: As one who has proudly worn the cadet gray and had the privilege, which is now yours, of pinning on the insignia of a 2nd Lieutenant, I am deeply appreciative of the honor you have paid me in the dedication of this edition of the Howitzer. I am sure that among all those distinguished Americans who have served in the Presidency, few could have felt the same intensity of personal satisfaction that I shall experience in commissioning in the service of the United States a graduating class of the Military Academy. Few of them could have had an inkling of your thoughts and emotions at the last parade on the Plain; few could feel with the heart-stirring climax of four long and arduous years. On the other hand, I am doubly sure that few would have expected from you as much as I do-for I know your mettle, I know what you can do. God speed and good wishes to each of you."

His one-page transmittal letter, typed on White House letterhead, in full: "As promised in the letter I wrote to you on December twenty-fourth, last, I enclose a short handwritten note for the use you suggested in the HOWITZER. While I know that this year's edition of the HOWITZER is intended to emphasize the soldier-statesman aspect in our training, I have made my own message to you exclusively a personal one. If you find what I have written to be either inadequate or in any way unsatisfactory-or if you would prefer that it be typewritten instead of handwritten, you have only to return this to my office with an appropriate suggestion. If you do return it, please mark it for the personal attention of Mrs. Whitman. Again, my thanks for your courtesy to me." In overall fine condition, with two paperclip impressions to the top edge, and a couple of small stains to the typed letter.

Written less than a week into his presidency, this letter carves out a singularly unique place in the history of Dwight D. Eisenhower, forming a bridge between his formative early days as a West Point cadet and his ascendancy to the nation's highest office. Moreover, letters handwritten by Eisenhower as president remain appreciably rare and sought after, with this desirable fully signed example coupled with a transmittal letter that impressively predates its holographic counterpart by three days. Presidential bearing aside, the eloquent and cordial tone of these letters are only outdone by their ideal subject matter-Eisenhower is joined by U. S. Grant as the only two presidents to have graduated from the United States Military Academy. Palpable is the pride felt by the former, whose potent message to the West Point graduating class was indeed published in full in the 1953 Howitzer yearbook. A gem in the crown of presidential letter writing, and quite possibly the finest Eisenhower correspondence ever offered-our research shows that this is only the fourth handwritten letter from President Eisenhower to be offered at auction in the past 30 years.