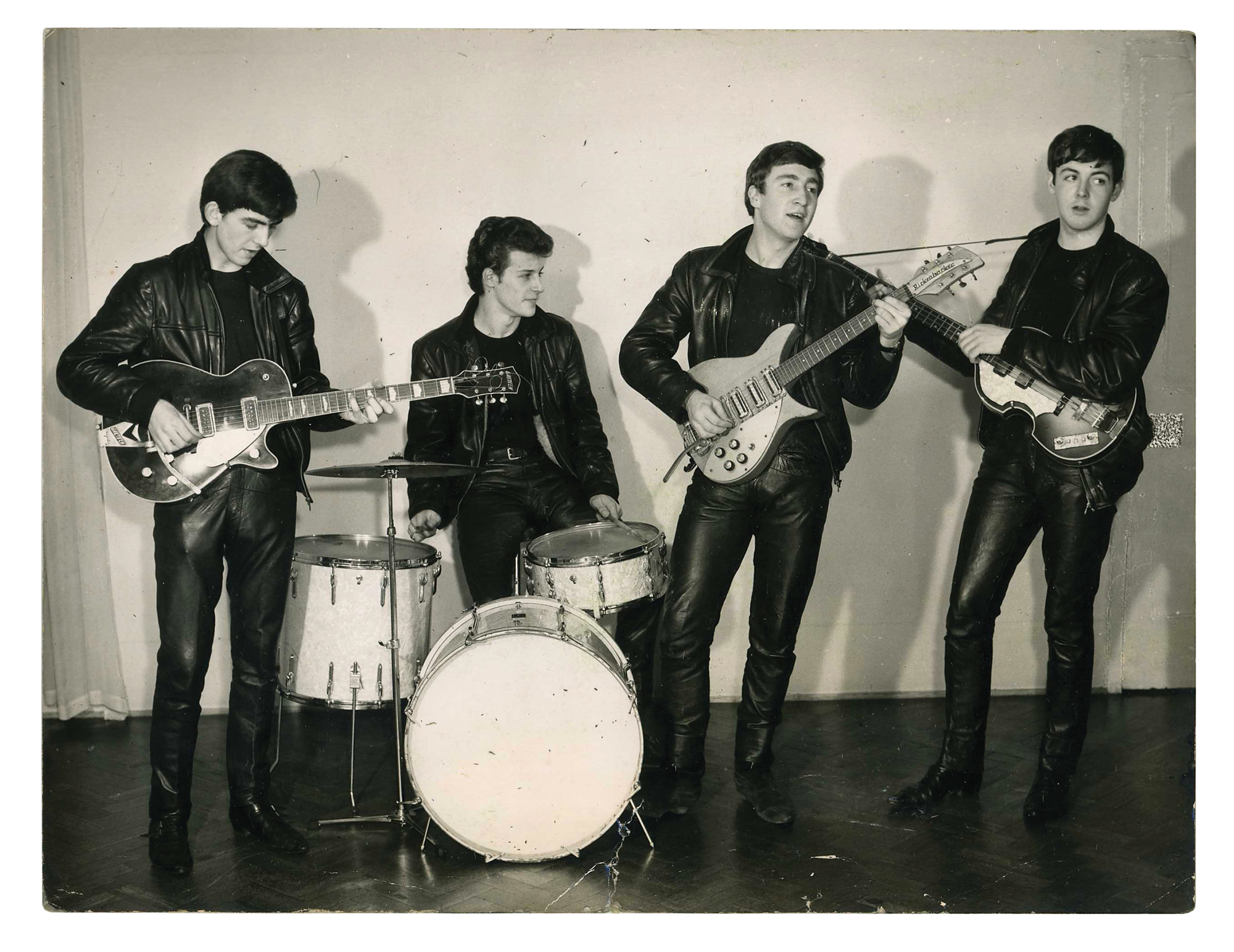 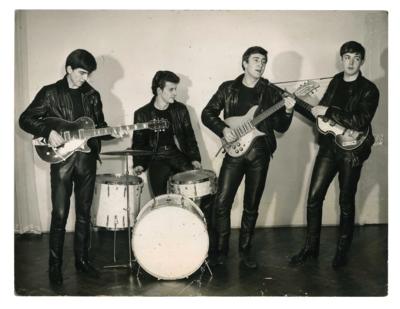 Exceptionally rare vintage semi-glossy 8.5 x 6.5 silver gelatin photo of the Beatles that was taken in the photography studio of Albert Marrion in Wallasey, Merseyside, on December 17, 1961. This was the group’s first ever professional photo shoot and it was paid for by Brian Epstein. It depicts John Lennon, George Harrison, Paul McCartney, and Pete Best dressed in leather and posing with their instruments. The photograph was developed in Marrion’s studio and was obtained by a former employee. In very good to fine condition, with light scuffing, creasing and a tear to the bottom edge.

Accompanied by a certificate of authenticity from Tracks, and by a letter of provenance from said employee: “From 1955-1963 I was employed by Albert Marrion as an assistant photographer, I was involved in the shoot for The Beatles photo shoot which was held at Albert Marion studio at Wallasey, 1961. I arranged the lighting, set up and focused the camera, and put the dark slide into the camera ready for Albert to press the button.”

The photo shoot, according to Marrion: ‘At first, I was reluctant to accept the task. We were primarily a portrait and wedding studio. In fact, the reason Epstein called me was I had been the photographer for his brother Clive’s wedding. Brian had told me they were a scruffy-looking group in all-leather outfits, but quite harmless. I agreed and told Brian to have them meet me at my Wallasey studio the following Sunday, December 17. At first, I asked my partner, Herbert Hughes, to take the photo session, but he flatly refused, wanting nothing to do with the beat group.

‘Sunday morning arrived and the four Beatles arrived at my studio. I remember those leather pants and jackets, the polo sweaters, and suede shoes to this day. Brian had spoken to them prior to the meeting so they were half serious in attitude. Every once in a while, John Lennon would stick his tongue out and make a wisecrack. John and Paul joked and laughed throughout most of the session. George Harrison was quiet and Pete Best almost didn’t speak at all. It was pouring down rain and Lennon was beginning to irritate me. I, being bald at the forehead, Lennon frequently referred to me as ‘Curly.’

‘This photo session was done for Epstein as a friendly gesture against the wishes of my partner, Hughes. I took about thirty photographs of the Beatles but discarded all but sixteen negatives because many showed Lennon and McCartney acting up and spoiling the pose. No doubt, those negatives should have been kept, looking back.’ Although Marrion remembered 16 photographs surviving, 17 still exist. One of the images later became famous when it appeared on the front cover of Mersey Beat magazine in January 1962 and was used for promotional cards.