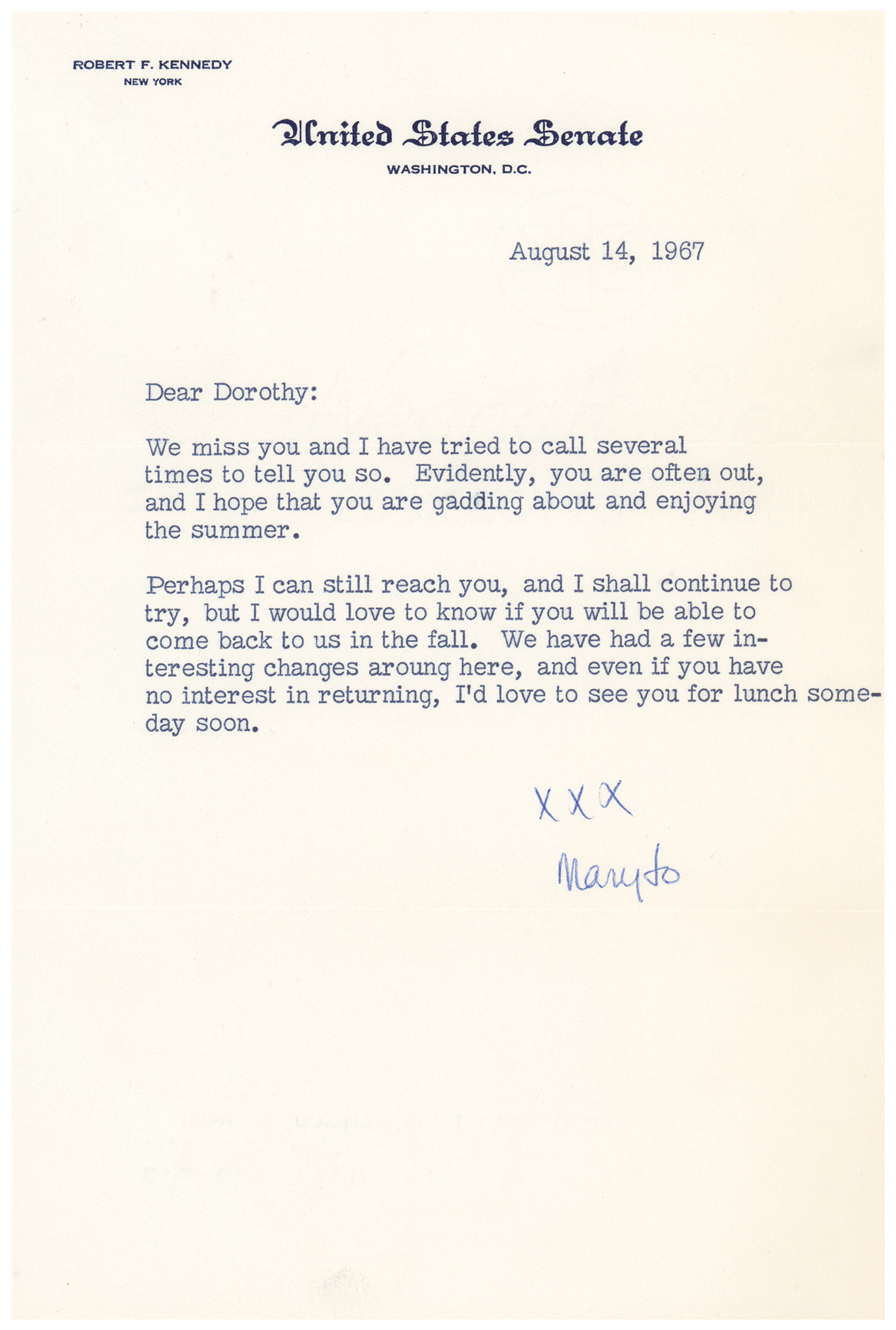 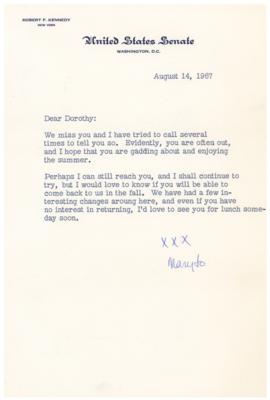 Secretary and campaign worker for Senator Robert F. Kennedy's 1968 presidential campaign, who died in a car accident on Chappaquiddick Island while being driven by Senator Ted Kennedy. TLS signed “xxx, Mary Jo,” one page, 6 x 9, United States Senate letterhead, August 14, 1967. Letter to Capitol Hill intern Dorothea Megna, in full: "We miss you and I have tried to call several times to tell you so. Evidently, you are often out, and I hope that you are gadding about and enjoying the summer. Perhaps I can still reach you, and I shall continue to try, but I would love to know if you will be able to come back to us in the fall. We have had a few interesting changes around here, and even if you have no interest in returning, I'd love to see you for lunch someday soon." In fine condition. Accompanied by the original mailing envelope and a photocopy of Dorothy's invitation to a "Summer Swim Party" hosted by Senators Edward and Robert Kennedy in Virginia on August 9, 1966.

Teacher and political campaign specialist Mary Jo Kopechne, one week shy of her 29th birthday and riding as the passenger of Senator Ted Kennedy, was tragically killed in a car crash on July 18, 1969. Following a party in honor of RFK's dedicated campaign workers known as the 'Boiler Room Girls,' Ted Kennedy lost control of his Oldsmobile while crossing a bridge on Martha's Vineyard, plunging it into Poucha Pond. Kennedy claimed to have attempted to dive and rescue Kopechne multiple times before swimming to shore and leaving the scene, not notifying authorities of the accident until the next morning. By that time, Kopechne's lifeless body had been discovered inside the submerged vehicle.

Kennedy's inaction in the immediate aftermath of the accident sparked moral outrage across the nation, with many calling for his resignation. One week after the crash, he received a light punishment—a two-month suspended sentence for 'leaving the scene of an accident causing bodily injury'—and gave a prepared, televised statement in which he denied immoral conduct or intoxication, and expressed regret for his delayed report to the police. Although he faced no further consequences, the incident weighed heavily on his own presidential aspirations.

Mary Jo Kopechne's autograph is exceedingly rare, this being the only example we have ever offered.