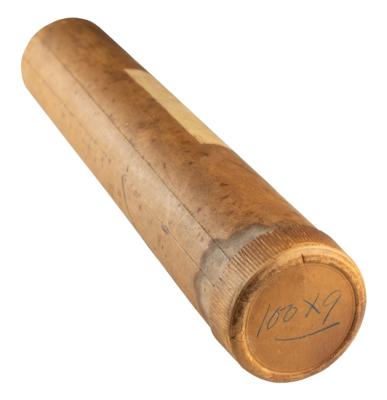 Cardboard shipping tube, measuring 20″ long, addressed in an unknown hand in ink to "Aan Prof. Dr. A. Einstein, Haberlandstrasse 5, zu Berlin," and stamped "Bataafsch Genootschap [Batavian Society] / Rotterdam" as the sender, with a "349 / Rotterdam" label to the left side. In very good to fine condition.

The Batavian Society for Experimental Philosophy, based in Rotterdam, is one of the oldest Dutch learned societies; today, it is mostly dedicated to medicine and the engineering sciences. Having been invited to become a corresponding member of the Society in mid-July 1919, Einstein wrote to Dutch physicist Hendrik Antoon Lorentz on November 15, 1919, to discuss several scientific matters, using the postscript to "express my special thanks to you for admission into the Batavian Society." Einstein lived in an apartment at Haberlandstrasse 5 in the Schöneberg district of Berlin from about 1917 to 1933, when he emigrated to the United States.

Accompanied by a letter of provenance from the present owner, in full: "My father was employed at the Institute for Advanced Study (IAS), Princeton NJ as a caretaker of real estate properties owned by IAS from 1969 to 1995. Some of these properties were located on Mercer Street, Battle Road, Olden Lane, Maxwell Lane and others when these houses became vacant he would have to clean and prepare them for the next professor to move in. It was in the mid 1980's when he came home with the shipping tube from Germany. My father had built a shelf in our living room to display the shipping tube. After both my parents had passed on, I had to clean out their home and I kept the shipping tube."