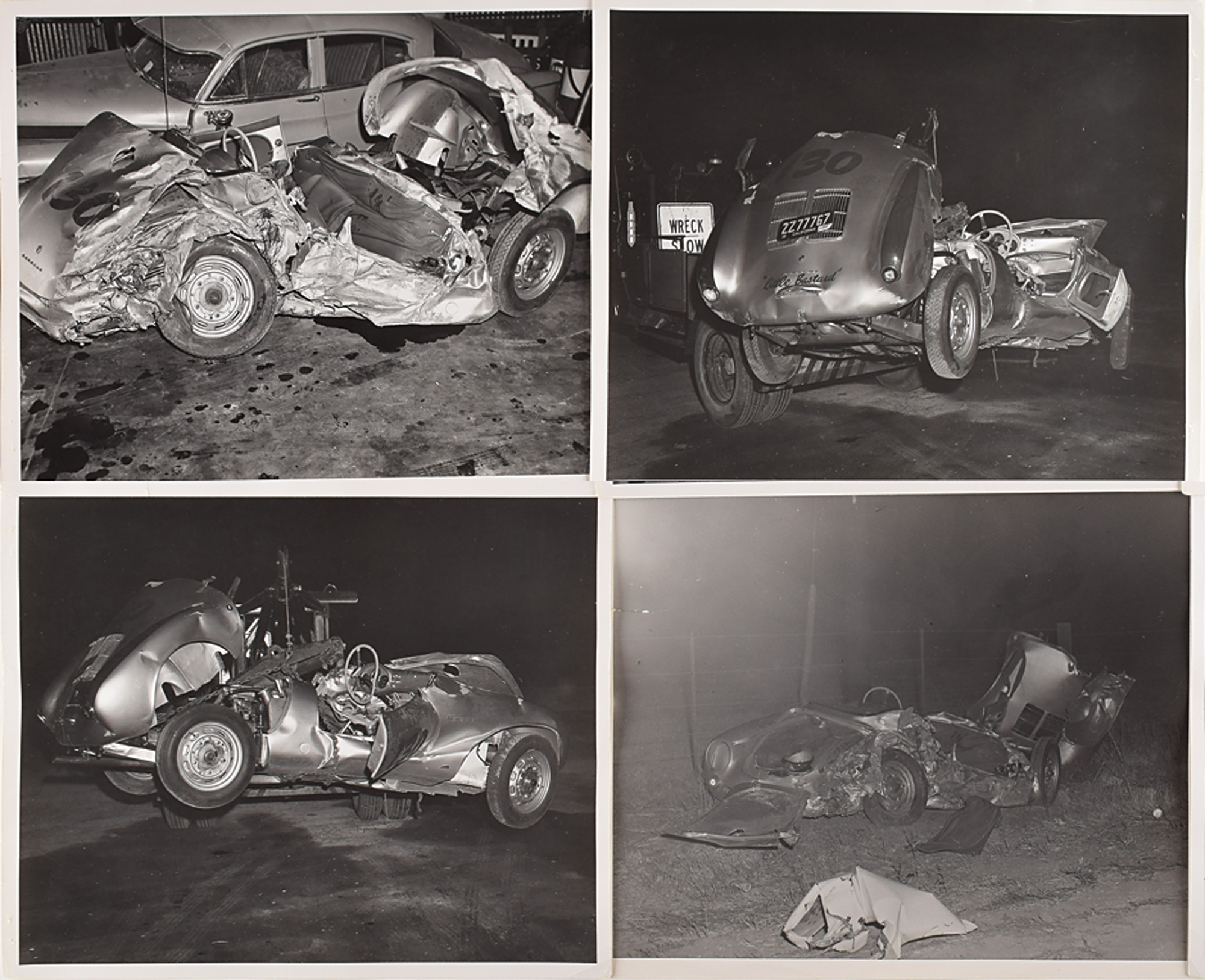 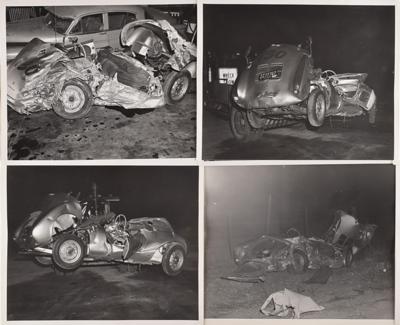 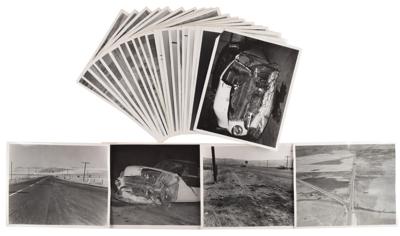 Unprecedented collection of 30 unpublished original glossy photos, 8.25 x 10 and 10 x 8.25, which vividly document the fatal car crash site of Hollywood actor James Dean, who was tragically killed at the age of 24 when his 1955 Porsche 550 Spyder, coined the ‘Little Bastard,’ collided with a 1950 Ford Tudor driven by Donald Turnupseed on September 30, 1955; the accident occurred when the actor was driving westbound on U.S. Route 466 en route to a racing event in Salinas, California.

The collection consists of 12 overhead views of the junction of Route 466 and Route 41, which lay a fascinating visual groundwork of the surrounding landscape and for a strip known as ‘the racer's road,’ a stretch of tarmac used as a fast-moving shortcut by sports car drivers making their way to Salinas. Also featured is a total of 18 ‘ground-level’ photos, with nine showing Routes 466 and 41 in up-close detail—replete with telephone poles, mountainous vista, disrupted road shoulder, and fresh skid marks and vehicular fluid stains—and nine others showing the terrifying aftermath photos of Dean and Turnupseed’s mangled automobiles; the interior or exterior of Dean’s significantly damaged Porsche 550 is visible in six of the photographs, as is Dean's No. 130 racing number and "Little Bastard" sticker.

The photos, distinguished by date, are as follows: four of the ground-level aftermath photos are dated to the day of the accident, September 30, 1955; nine ground-level photos of Routes 466 and 41 are dated to the following day, October 1, 1955, with one photo of Turnupseed’s damaged Ford Tudor in a garage similarly dated; seven aerial photos dated June 21, 1958, and five aerial photos dated July 10, 1958. Four vehicle aftermath are undated, but were assuredly taken on September 30th or on early October 1st.

Reverse of 26 photos stamp-dated with “Russ Schober Photo” or “Stevens Studios” address stamps and annotated with corresponding photo numbers. The reverse of all ground-level photos annotated in pencil, “Wutherich vs. Turnupseed-Dean-Coulter,” which alludes to the surviving passenger in Dean’s car, Porsche mechanic Rolf Wutherich, who attempted to sue the insurance companies of both Dean and Turnupseed for the array of injuries he incurred, such as a double fractured jaw and a severely torn left hip that required multiple surgeries. The legal proceedings never came to fruition, however, with Wutherich returning to West Germany in 1957. The other driver in the accident, Turnupseed, was practically physically unscathed, with no more than a bloody nose and scratches. In overall very good to fine condition, with scattered creasing, one edge tear, and one clipped corner.

Accompanied by a signed letter of provenance from Robert A. Coyle, the son of Robert Everett Coyle, who served as the attorney on behalf of Turnupseed and his insurance company. The letter, in part: “Official photos taken at the scene after the crash and published by Stevens Studios in Paso Robles, CA…used in court case Wutherich vs. Turnupseed, Dean, Coulter…Our father, Robert E. Coyle, was the attorney for Donald Turnupseed…When the case was dropped, he was still in possession of the photographs and being a history buff, made sure they were not destroyed.”

Like other leading men Steve McQueen and Paul Newman, Dean developed a passion for auto-racing in his early adulthood and began to purchase vehicles shortly after filming East of Eden. In Palm Springs on March 26-27, 1955, he entered his first professional race, taking the top spot in the novice class and placing second in the main event. Barred from all racing activities during the filming of Giant, it wasn’t until the end of production that Dean traded in his 1955 Porsche Super Speedster for his ‘Little Bastard,’ the faster and more powerful 1955 Porsche 550 Spyder, which he planned to drive in the upcoming Salinas Road Race event scheduled for October 1-2. The early death of James Dean reverberates to this day, with these never-before-seen images offering an intensely unique perspective of the crash location and the resulting carnage, with many of the photos taken only hours after the accident.