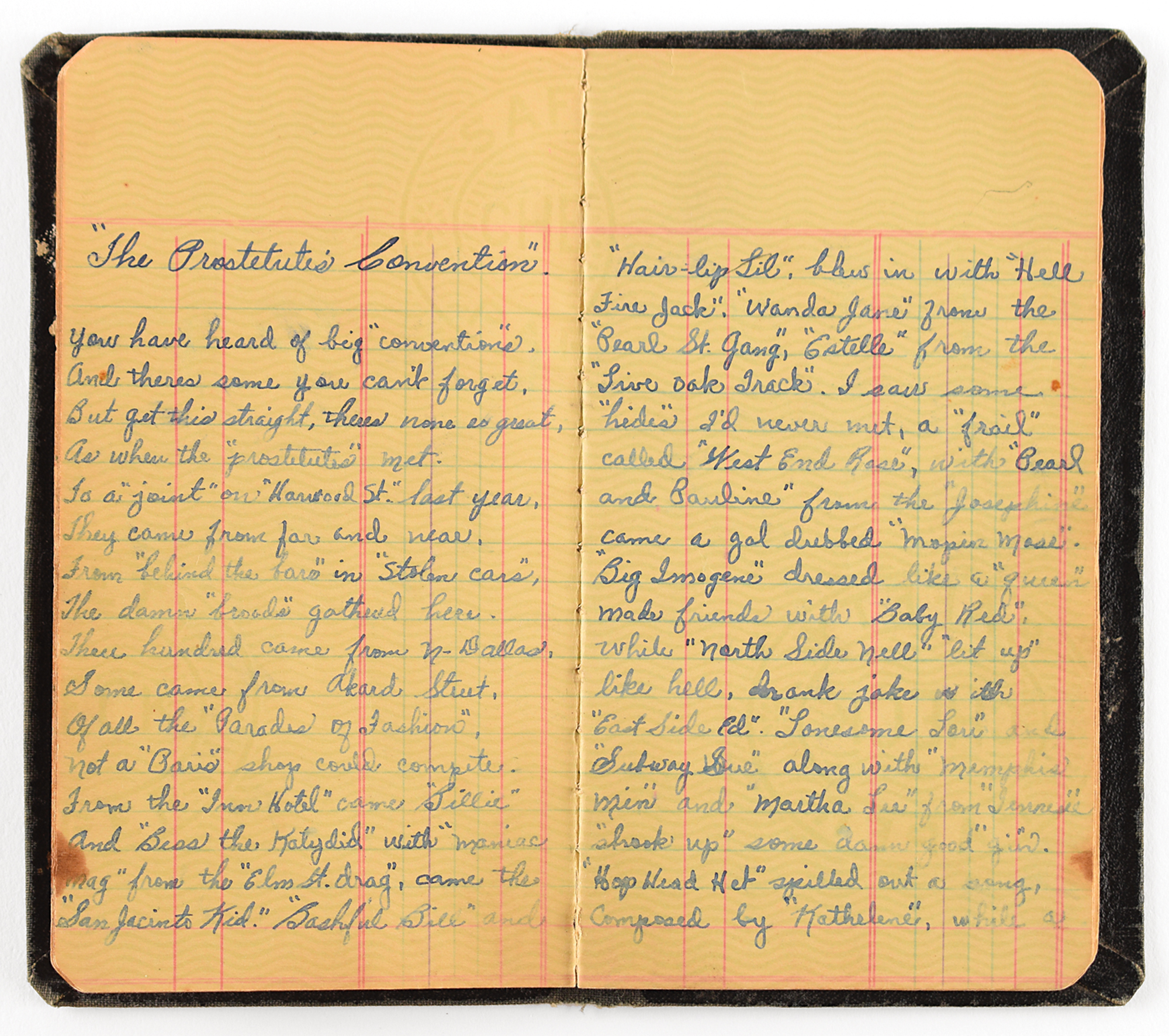 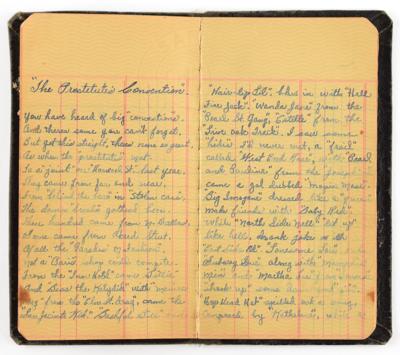 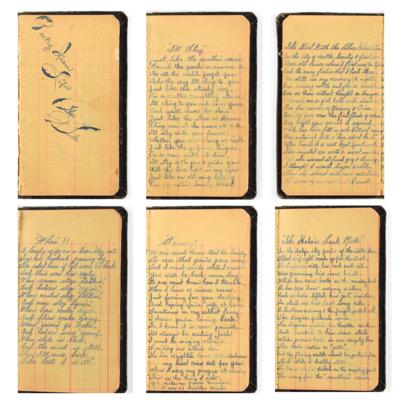 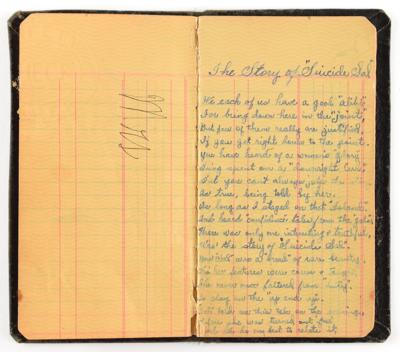 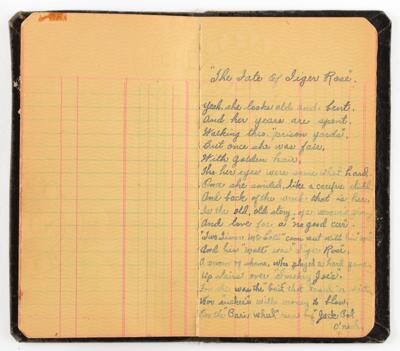 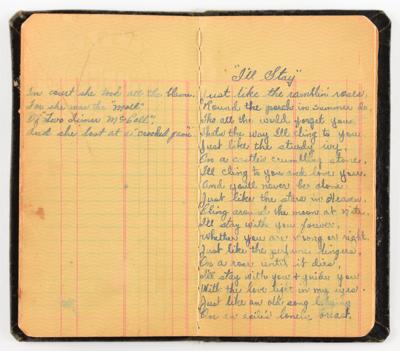 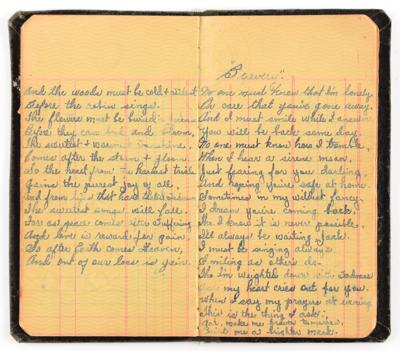 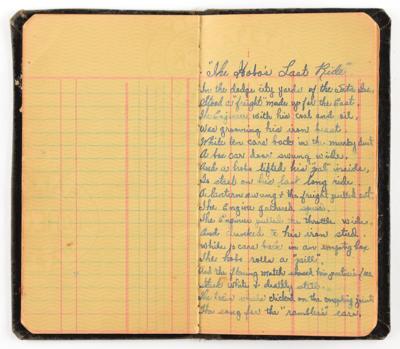 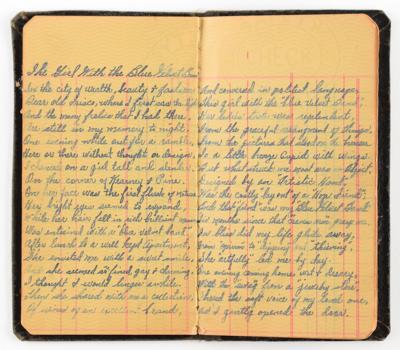 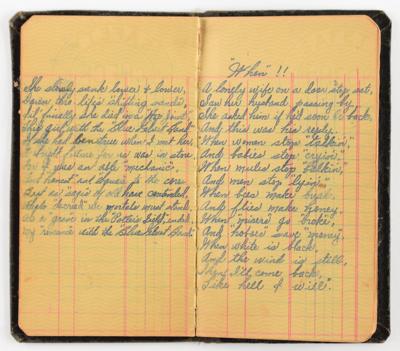 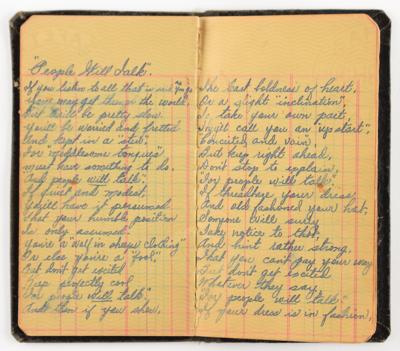 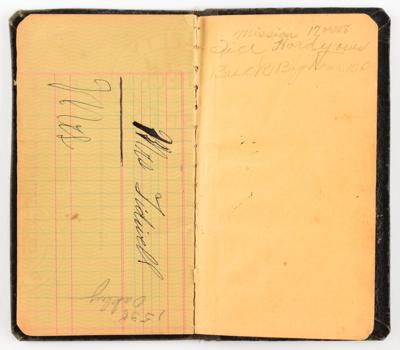 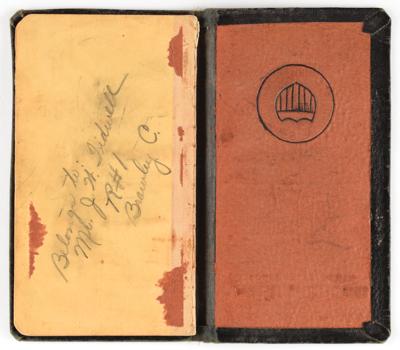 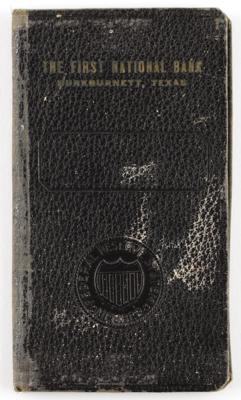 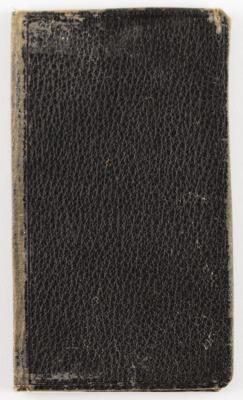 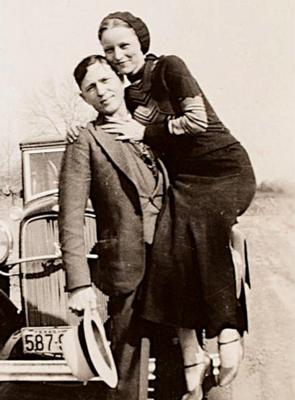 Bonnie Parker's handwritten poem book entitled "Poetry from Life's Other Side," penned on 32 pages inside a black leatherette 3.5 x 6 bank book, stamped on the front cover, "The First National Bank, Burkburnett, Texas." Featuring a mix of Parker's original creative compositions and renditions of popular folk ballads, these poems were written by Parker while she was held in Kaufman County Jail, Texas, in 1932, after being arrested for the botched armed robbery of a hardware store with Clyde Barrow, Ralph Fults, and Raymond Hamilton; while Barrow and Hamilton managed to escape on foot, Parker and Fults were apprehended. This was Parker's first and only arrest, and she stewed in jail for about two months before being released on June 17th, after the jury failed to indict her. In Emma Parker's 1934 biography of Bonnie and Clyde, she made note of several particulars of her daughter's stay in prison: that this was when she first drafted 'Suicide Sal'; that it was when Bonnie began to regularly use hard slang and gangster jargon; and that she befriended the jailer and his wife, who would let her sit out on the lawn. With little to do other than pine for Clyde and chat with her jailer, it is no surprise that Bonnie's fertile imagination turned to poetry: of the ten poems in this book, five appear to be original compositions, largely drawn from her adventurous life on the road with the Barrow Gang.

The contents are as follows:

1. "The Story of 'Suicide Sal,'" six pages, 104 lines: a less polished version than the one published and popularized by her mother in 1934, with several words and lines reworked, and one entire stanza deleted from the later work.

2. "The Prostitute's Convention," four pages, 58 lines: a narrative poem featuring prostitutes with colorful names like "West End Rose," "Lonesome Lou," and "Subway Sue" gather for a party before being dispersed by the cops.

3. "The Fate of Tiger Rose," four pages, 57 lines: a narrative poem about a "woman of shame, who played a hard game" as the moll of "Two Timer McCall." The shoot-out scene foreshadows Parker's famous autobiographical poem, 'The Trail's End,' using similar language (here: "McCall let go and 'Pat' sags low, / as the 'sub' went 'rat-tat-tat'"; in 'The Trail's End': 'they're invited to fight / by a sub-gun's rat-tat-tat').

4. "I'll Stay," two pages, 24 lines: an ode to devotion, "Just like the stars in heaven / fling around the moon at nite / I'll stay with you forever / whether you are wrong or right."

5. Untitled, two pages, 32 lines: a traditional poem on faith and renewal, "The flowers must be buried in darkness, / before they can bud and bloom, / The sweetest & warmest sunshine, / comes after the storm & gloom."

8. "The Girl with the Blue Velvet Band," five pages, 84 lines: a traditional narrative poem describing a descent from a life of opulence to one of opiates.

9. "When!!," one page, 16 lines: a humorous doggerel about a husband abandoning his wife.

On the final page is an ownership signature in pencil, "Belongs to: Mr. J. W. Tidwell, R#1, Brawley C.," and another page is marked, "Mrs. Tidwell." Provenance: Lot 5337, Fine Books and Manuscripts, Bonhams, June 20, 2007. Includes the original auction catalog, which notes: "John Westly ('J.W.') Tidwell worked in the Kaufman County Sheriff's Department in the 1930s. Presumably he is the friendly jailer of whom Emma Parker writes, or an associate of that jailer who later obtained the notebook, although family tradition places him as a transport officer who met Bonnie Parker." The book was purchased by noted collector David Gainsborough Roberts, and it is also accompanied by several pieces of his correspondence related to its publication in various outlets (including in Jeff Guinn's book Go Down Together). In fine condition, with overall handling wear, some smudging to ink, and the cover of the booklet partially detached.