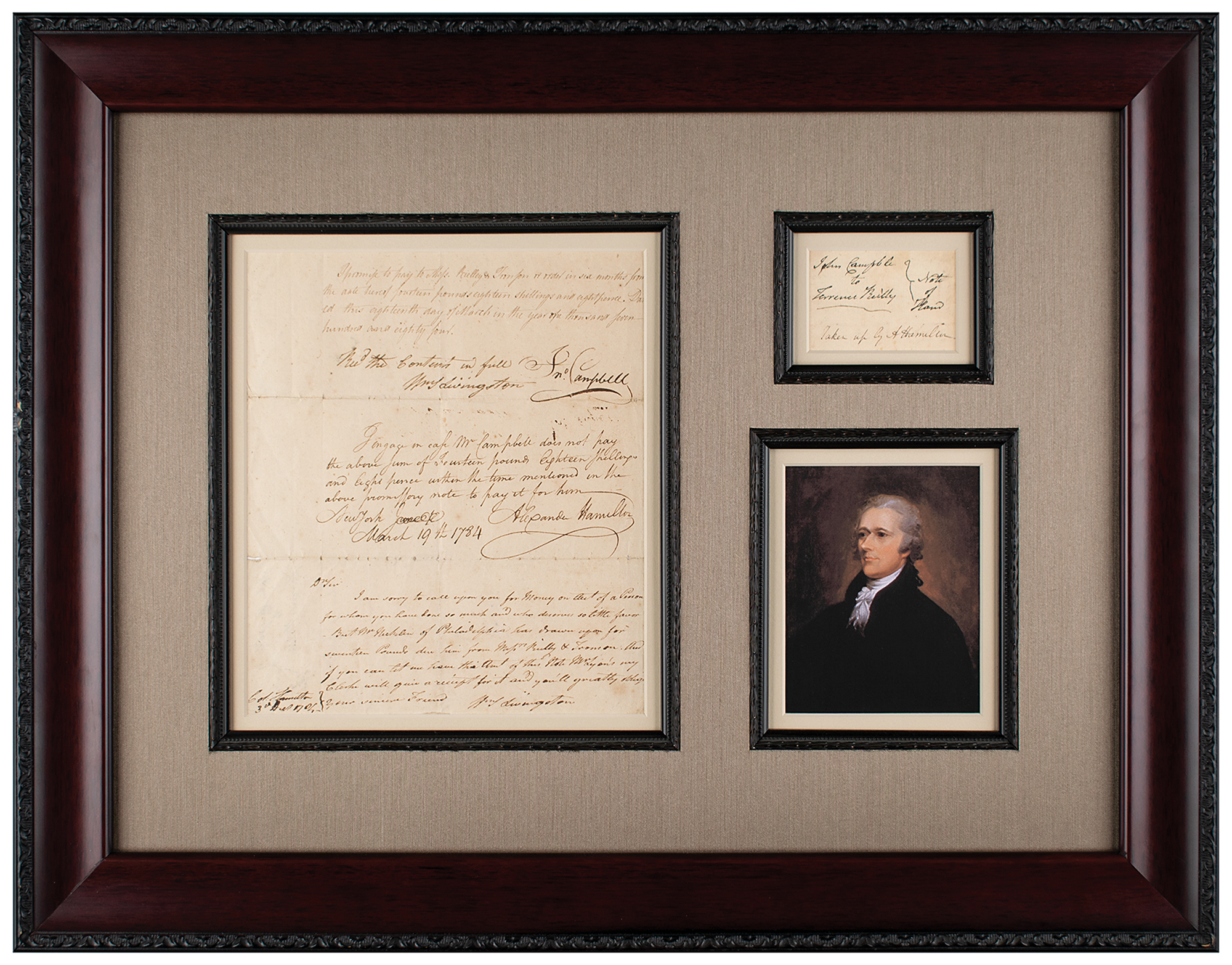 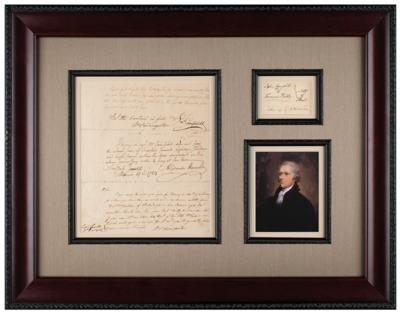 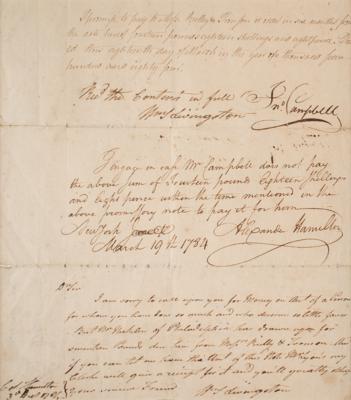 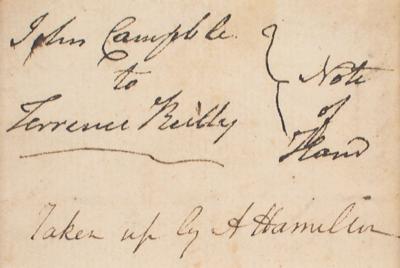 ADS, signed twice, "Alexander Hamilton" and "A. Hamilton," one page, 8 x 9.25, March 19, 1784. Document featuring a handwritten pledge by Hamilton to guarantee funds lent to John Campbell, a merchant and weaver who was engaged in smuggling British textile manufacturing machinery to the United States. At the top, Campbell endorses a manuscript promissory note: "I promise to pay to Mess. Reilly & Tronson or order in six months from the date hereof fourteen pounds, eighteen shillings and eight pence. Dated this eighteenth day of March in the year one thousand seven hundred eighty four." At center, Hamilton pens his personal guarantee, in full: "I engage in case Mr. Campbell does not pay the above sum of fourteen pounds, eighteen shillings and eight pence within the time mentioned in the above promissory note to pay it for him. Alexander Hamilton, New York, March 19th, 1784."

Below is a handwritten note by prominent attorney William S. Livingston, asking Hamilton to repay the debt, in part: "I am sorry to call upon you for money on account of a person for whom you have done so much and who deserves so little favor. But Mr. Nicklin [merchant Philip Nicklin] of Philadelphia has drawn upon for seventeen pounds due him from Messrs. Reilly & Tronson, and if you can let me have the amount of this note, Mr. Lyons my clerk will give you a receipt for it."

The reverse is docketed “John Campbell to Terrance Reilly, Note of Hand,” under which Hamilton himself has written, “Taken up by A. Hamilton.” Beautifully double-matted and framed with a color copy of the docketing panel and a portrait of Hamilton to an overall size of 24.5 x 19. In very good to fine condition, with intersecting folds, and overall light creasing.

Alexander Hamilton was long interested in developing a strong manufacturing sector within the United States—a view that differed quite a bit from the agricultural focus of many fellow Founders. His famous 1791 'Report on Manufactures' envisioned an America 'independent on foreign nations for military and other essential supplies.' In recent days, pandemic-related disruptions in the global supply chain have given a renewed importance to Hamilton's words. By protecting infant industries through tariffs and encouraging the nation's spirit of enterprise, innovation, and invention with industrial subsidies, Hamilton believed that America might grow into one of the world's dominant manufacturing powers.

Even prior to his public role as Secretary of the Treasury, Hamilton worked privately toward these ends. John Campbell was working to develop the nascent American textile industry, bringing trained workers (often as indentured servants) and smuggling machinery into the United States from Great Britain (see: 'Trade Secrets: Intellectual Piracy and the Origins of American Industrial Power' by Doron S. Ben-Atar). Campbell was also involved with the Society for Establishing Useful Manufactures, an organization supported by Hamilton and a prototype for the public-private enterprises of the 19th century. By pledging his own funds in support of Campbell, Hamilton was sponsoring his own economic ideals as he sought to expand the American economy.

Though Hamilton was called to repay the debt, Campbell wrote to him in May with an apology for having not paid, guaranteeing that he would later. Hamilton's future business engagements with Campbell—again standing personally as surety for some of Campbell’s ventures in 1792—suggest that Campbell made good on this promise. An excellent, early Hamilton document directly related to his vision for the American economy.