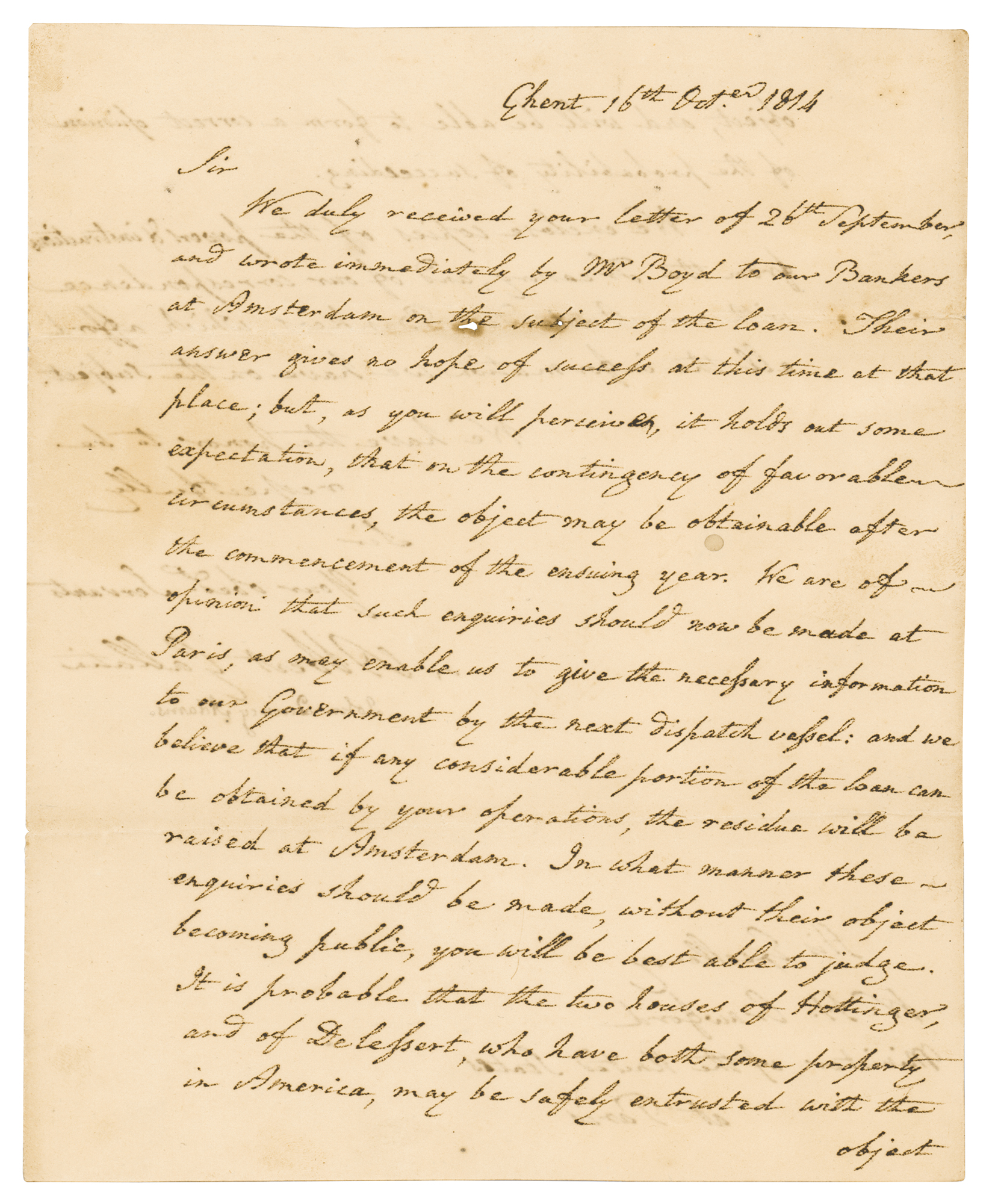 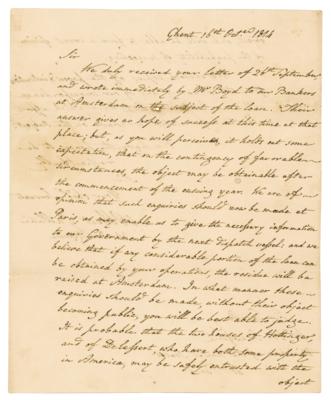 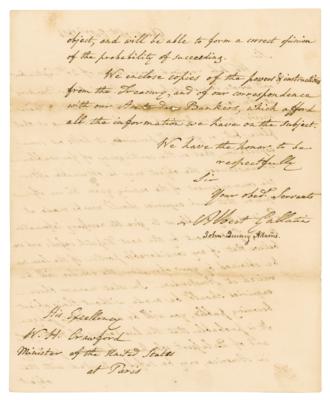 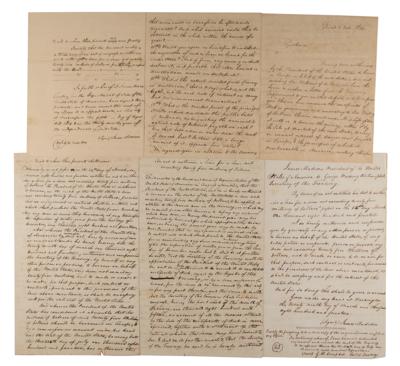 Important archive of manuscripts from the collection of Secretary of the Treasury William H. Crawford, involving a proposed loan from Europe to support the United States government during the War of 1812. The US faced a $50 million shortfall in revenue, brought on by restricted trade, years of seizures of merchant ships, and the expense of the war. There was a real question as to whether the federal government would be able to continue to support the military during wartime. To meet this challenge, Congress authorized President James Madison to borrow up to $25 million. As structuring the loan into tranches would make it more palatable to the public, they first sought a loan in the amount of $6 million. Trusted diplomats John Quincy Adams and Albert Gallatin were already in Europe to begin negotiating the Treaty of Ghent, and they were charged with acquiring the loan at the same time.

On September 29, 1814, John Quincy Adams wrote in his journal: '[Boyd] left Washington the 12th of last month…He arrived at Bordeaux the 17th of this month at Paris the 23d and here this morning…His dispatches and newspapers are to the 12th of August. Those from the Treasury are in the first instance for Mr. Gallatin with powers to negotiate a loan in Holland of six millions of dollars. They are to me only in the case of Mr. Gallatin's absence and to Mr. Crawford in case the loan should not be obtainable at Amsterdam.'

On October 3, Gallatin wrote confidentially to the bankers Willem and Jan Willink in Amsterdam, who had been investors in the Louisiana Purchase, seeking funds up to $6 million. A true copy of this letter is included, bearing secretarial signatures of Gallatin and Adams. Gallatin received a response from the Willinks, explaining that they would be unable to lend the money on terms likely to be acceptable. The Ghent negotiators then wrote to Secretary Crawford with this news on October 16th to ask for his advice. Their letter is the highlight of this archive:

ALS in Gallatin's hand, signed by both, "Albert Gallatin" and "John Quincy Adams," one page both sides, 7 x 8.75, Ghent, October 16, 1814. In part: "We received your letter of 26th September, and wrote immediately by Mr. Boyd to our bankers at Amsterdam on the subject of the loan. Their answer gives no hope of success at this time at that place; but as you will perceive it holds out some expectation that on the contingency of favorable circumstances, the object may be obtainable after the commencement of the ensuing year. We are of opinion that such enquiries should now be made at Paris, as may enable us to give the necessary information to our government by the next dispatch vessel; and we believe that if any considerable portion of the loan can be obtained by your operations, the residue will be raised at Amsterdam. In what manner these enquiries should be made, without their object becoming public, you will be best able to judge. It is probable that the two houses of Hottinger and of Delessert, who have both some property in America, may be safely entrusted with the object…We enclose copies of the powers and instructions from the Treasury."

Included is the complete loan package enclosed with the letter, all in a secretarial hand but most with annotations by John Quincy Adams. These documents are:

Manuscript copy of the document from the Secretary of Treasury authorizing Gallatin and Adams to seek a loan "not exceeding in the whole six millions of dollars" in Europe, with minor corrections in Adams's hand (adding "said," "the," and "sum" to the text).

Manuscript copy of the document from Secretary of State James Monroe affixing the seal of his office to a copy of the act of Congress, attesting to the authenticity of the Act, with two amendments in Adams's hand (adding "shall" and "the").

Manuscript copy of the Act of Congress "to authorize a loan for a sum not exceeding twenty five millions of dollars," amended several times in Adams's hand (adding "thus borrowed," "hereby," "in," "and," "thus," and "of," with some repetition).

Manuscript copy of an order by President James Madison authorizing the Secretary of the Treasury, or his designates, to obtain the loan.

As it turned out, the response from France was even less encouraging than the one from Holland. Crawford responded to Gallatin that he had 'made sufficient enquiry to ascertain that no loan can be obtained in France upon terms which can be accepted.' Crawford feared that the recent capture of Washington would only pose further obstacles to their desires. Talleyrand himself had said 'on holding a large amount of the funded debt of the US, he would not give one sou for the whole of it.'

On October 25, just days after this letter, Crawford wrote to Gallatin, 'The inference is almost necessary that the US have not in the hands of their bankers funds sufficient to discharge the interest of the public payable in Europe,' meaning the interest payment due on the US Louisiana debt. The next day, Gallatin reported to Monroe that a loan in Europe would not be obtainable before the first of the following year. His candid assessment was much worse: it would not be forthcoming at all. The budget shortfall thus went unsolved, forcing the United States to default on some of its debts in November 1814 with missed interest payments on bonds. Only the end of the war would put the nation on a more stable financial footing.

We know of no similar documents to exist in private hands. This historic archive was originally obtained from a Crawford heir.