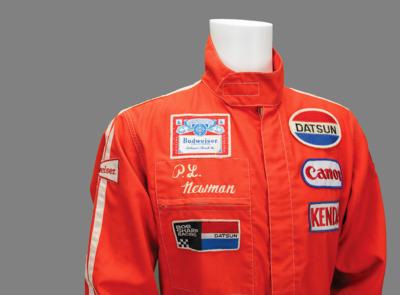 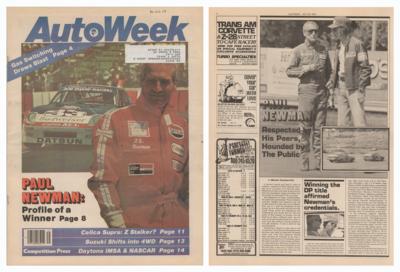 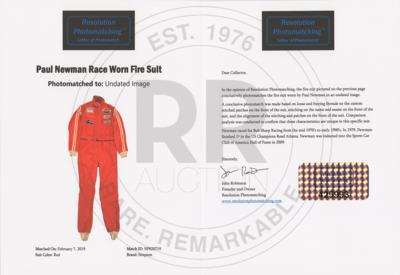 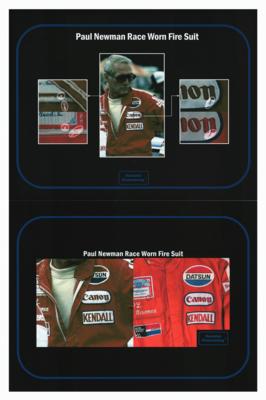 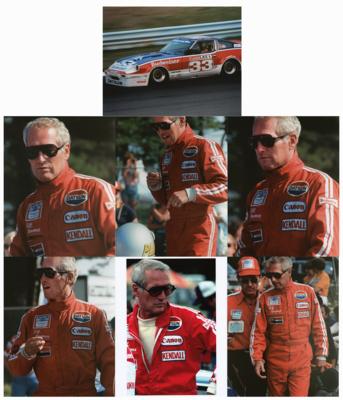 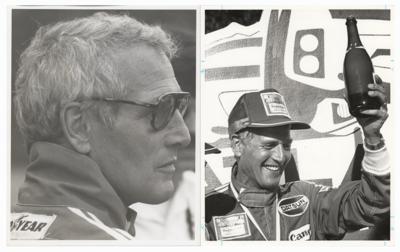 Paul Newman's personally-owned and -worn bright red fireproof auto racing suit from circa 1979-1983, manufactured by Simpson Safety Equip. Inc. in May 1979, with name patch on the chest embroidered in white, "P. L. Newman." Sewn-on patches include Bob Sharp Racing/Datson (chest), Datsun (chest), Canon (chest), Kendall (chest), Budweiser (chest, both arms, and back), and Goodyear (back). This suit has been conclusively photomatched by Resolution Photomatching to an image of Newman captured by Dan Boyd, made based on loose and fraying threads on the custom-stitched patches on the front of the suit, stitching on the name and seams, and the alignment of stitching and patches on the front of the suit; several other photographs of Newman in the suit are included, as is a Budweiser advertisement and an issue of AutoWeek from July 30, 1979, both featuring him in the suit. In fine condition, with general wear from use. Accompanied by a laminated letter of provenance from a previous owner, in part: "I bought this used Paul Newman racing suit at a SCAA course worker's Saturday night BBQ at Sears Point Raceway, September 17, 1983. It was a Trans Am race weekend and Mr. Newman was driving one of Bob Sharp Racing's Datsun 280 ZX Turbos. He gridded 10th and finished 8th. At that Saturday night BBQ they held a benefit auction to help recently injured pro racing driver Kathy Rude who was hurt in a racing accident…I kept the FedEx receipt for proof of where I got it from. (Columbia Pictures of New York City) The suit was sent to me by Marcia Franklin who at that time was Mr. Newman's personal assistant." The FedEx label referenced is also included.

Newman became interested in auto racing while training under Bob Sharp at the Watkins Glen Racing School for the 1969 filming of Winning, in which he plays a driver with dreams of winning the Indianapolis 500. Thus began a passion he held for the rest of his life, frequently competing in Sports Car Club of America (SCCA) events, the 1979 24 Hours of Le Mans, and in the North American Can-Am series. His first professional event as a racer was in 1972 at Thompson International Speedway, where he quietly entered as "P. L. Newman"—the name he went by for the rest of his racing career, and what is embroidered on this suit. He drove for the Bob Sharp Racing team from the mid-1970s through the early 1990s, mainly racing Datsun/Nissan vehicles in the Trans-Am Series. He became closely associated with the brand, and in 1983 a special, top-of-the-line 'Paul Newman' edition of the Nissan Skyline R30 was released in Japan. An outstanding, well-documented piece of racing and pop culture history.