Barnum on his menagerie, a somersaulting pony, and New York's Hippodrome 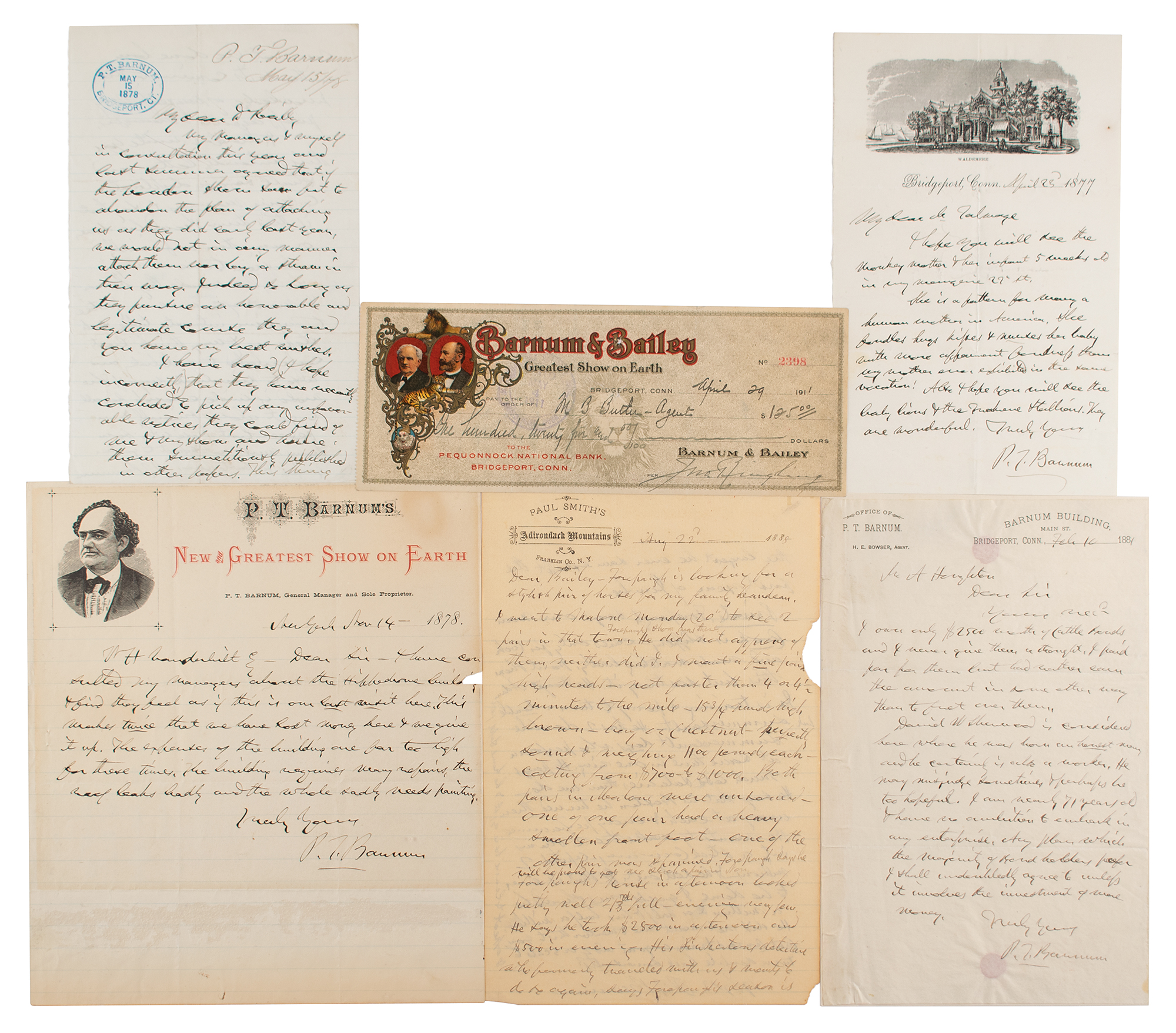 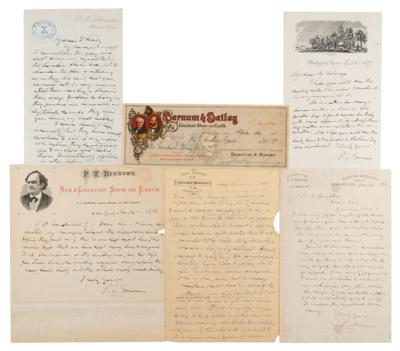 Barnum on his menagerie, a somersaulting pony, and New York's Hippodrome

Group of six items, including five ALSs by P. T. Barnum and one check signed by John Ringling, chronicling the business dealings of ‘The Greatest Show on Earth.’ Includes:

ALS signed “P. T. Barnum,” one page, Waldemere letterhead, April 23, 1877. In part: “I hope you will see the monkey mother & her infant 5 weeks old in my menagerie 27th St. She is a pattern for many a human mother in America. She fondles hugs kisses & nurses her baby with more apparent fondness than my mother ever exhibited in the same vocation! Also I hope you will see the baby lions & the…stallions. They are wonderful.”

ALS signed “P. T. Barnum,” one page both sides, stamped personal letterhead, May 15, 1878. To “Reilly,” in part: “My managers and myself in consultation this year and last summer agreed that if the London show saw fit to abandon the plan of attacking us as they did early last year, we would not in any manner attack or stand in their way. Indeed as long as they pursue an honorable and legitimate course they and you have my best wishes.”

ALS signed “P. T. Barnum,” one page, P. T. Barnum’s New and Greatest Show on Earth letterhead, November 14, 1878. To W. H. Vanderbilt, in full: “I have consulted my managers about the Hippodrome building & find they feel as if this is our last visit here. This makes twice that we have lost money here & we give it up. The expenses of the building are far too high for these times. The building requires many repairs, the roof leaks badly and the whole sadly needs painting.”

ALS signed “P. T. Barnum,” one page, Barnum Building letterhead, February 10, 1881. To A. Houghton, in part: “I own only $2500 worth of Cattle Bonds and I never give them a thought…I am nearly 71 years old & have no ambition to embark in any enterprise. Any plan which the majority of bond holders prefer I shall undoubtedly agree to unless it involves the investment of more money.”

ALS signed “P. T. Barnum,” one page both sides, Paul Smith’s Adirondack Mountains letterhead, August 22, 1888. To his partner James A. Bailey, mentioning rival Philadelphia circus manager Adam Forepaugh. In part: “Forepaugh says our man Cook is slippery—cares only for Cook and needs watching badly…He says Adam is training a pony to turn a double back summersault. He has 2 double summersault dogs, who perform at same time in one ring. He pays much less salaries than we do. He says that in Boston he turned them away at each & every performance.”

Full color Barnum & Bailey business check, 8.5 x 3.25, filled out in another hand and signed by John Ringling, “Jno. Ringling,” payable to M. B. Butler for $125, April 29, 1911. In overall very good to fine condition. A fantastic archive lending insight into Barnum's dealings as the premier American showman of the 19th century.